After nearly a decade and more than 40 shows, Kevin Heath will start a new chapter of life Photo by Marty Cheek
Kevin Heath poses in front of the stage at Limelight Actors Theater in Gilroy.

During the past decade, actor and director Kevin Heath played a significant role in building the arts and entertainment scene in South Valley. He’ll take his final bow Dec. 1 at the end of the run of Gilroy’s Limelight Actors Theater’s  “The Hallelujah Girls.”

About a year and a half ago, Heath and his husband, Alan  Obata, bought a fixer-upper in the Gold Country town of Twain Harte in Tuolumne County. After major remodeling, the house is now ready for them to move into. It’s a difficult decision for the couple to leave Gilroy, but the time is right.

Heath, at 54, hopes to enjoy a semi-retirement, perhaps finding a new role working with theater companies in the region. Obata will continue working in the South Valley region as a real estate agent, commuting here from his new home.

“I’ll end up doing something up there. It’s a tiny community and it makes Gilroy look like New York City. It’s a different way of life,” Heath said of the Sierra Mountains community of 2,226 people.

He started his journey in promoting South Valley’s creative arts endeavors by joining the board of directors of the Gilroy Arts Alliance in July 2010. 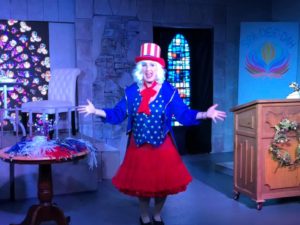 On Jan. 21, 2011, he launched the first Limelight show, “The Outrageous Adventures of Sheldon and Mrs. Levine.” Starting at the beginning of 2013, he has managed the Gilroy Arts Center, which serves as the home of a cabaret-style theater stage for Limelight. During the years, he has worked with local artists, photographers and actors to transform the former Salvation Army Thrift Store site in downtown into a place to promote the visual and performing arts.

After he announced he was leaving Gilroy, he received many words of kindness from local people expressing gratitude for what he has done for local art scene.

He appreciates the sentiment but emphasizes he feels confident a new leader will come along to fill the job of managing the center.

At the opening night of “The Hallelujah Girls,” he announced that South Valley Civic Theatre would be taking over the operations of Limelight, building on what Heath and his team have created. Limelight evolved to provide audiences with more daring theater material, bringing them comedies and musicals hardly seen in more traditional community theater venues.

“I feel like I’ve built Limelight into a different version of the theater than what was here in Gilroy for decades. I felt like we were sort of the new generation that came in,” Heath said. “And now we’re more like the norm, which couldn’t be more of a compliment. As far as the center goes, I’m really proud of what I’ve done.”

When the Gilroy Arts Center started, the board realized the site would not get much foot traffic of people coming in to see the paintings, photographs and other works of visual arts. A live theater aspect was discussed to bring people to see shows and other performances. Some of the SVCT members discussed creating a stage in the center. “They turned toward me and asked, “Kevin, can you put on a play?’ And I said, ‘Uh, sure, I’ll put on a play,’” he recalls. “I had directed before and I had acted in some plays, and I thought, I’ll bring some friends along and we’ll make it simple and put on a show. Theater sells here. Between Morgan Hill and Gilroy, theater is popular.”

The more intimate venue brings the audience close to the stage. They can even bring dinner and a bottle of wine. Limelight’s reputation for quality theater and taking risks helped it build a following among theater fans. One show even was nominated for a prestigious award in 2018.

“We’re the only theater in South County that’s ever been recognized by a San Francisco theater organization,” he said. “It’s called TBA. Theater Bay Area. And we were nominated for four awards for our musical ‘The Last Five Years.’” He recalled going to the gala awards show and feeling proud to be honored in the same category of Outstanding Production of a Musical as prestigious theaters such as Berkeley Repertory Theatre and San Jose Stage Company.

“To get nominated was a huge deal,” Heath said. We’re this little tiny theater and we got nominated with the big guys in San Francisco.”

Limelight has produced 43 shows, entertaining crowds with fine performances. Last year, more than 6,000 people visited the center, most for the shows.

Born in upstate New York, Health started his career in Connecticut after he graduated from college, putting to use his human resources skills.

After living in San Francisco in his mid-30s, he moved to Gilroy and has made it his home for more than 20 years. He made a lot of friends here. Heath and Obata plan to return to the Garlic City community for visits with friends and family — and, of course, to see shows at the Limelight Actors Theater.

“There’s a point in my life where you ask yourself, ‘What is my legacy going to be?’” he said. “And pretty much this center and Limelight is it for me. This is my legacy that I leave.”