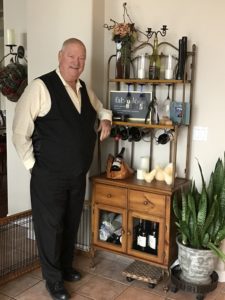 Carl Schindler was born and raised in San Francisco, Dec. 25, 1941, to Gertrude and Carl Creigh, Sr.

Upon graduating, Carl joined the United States Air Force and served in Spain for two years.

In 1964 he married his first wife Diana. They had three beautiful daughters; Lisa, Heidi, and Greta.

Carl attended the University of San Francisco and earned his bachelor’s degree in 1971 with honors, as his class valedictorian.

Carl worked for State Farm for more than 46 years and settled in Morgan Hill.

Together they adopted three teenage brothers, twins Nick and David, and Michael and Carl was step-father to Teri’s son, Kevin.

Carl was a skilled Cessna airplane pilot, a triple-A trap shooter, an avid motorcycle rider with the Blue Knights Motorcycle Club and he was very involved in the Morgan Hill community. He was a board member of Morgan Hill’s Community Law-Enforcement Foundation, and a member of the Rotary club of Morgan Hill, where he often played Santa Claus.

Carl had a very caring heart and gave generously but quietly to local causes. He just wanted to do what he felt was right, which was helping others.

Carl was also generous with his big bear hugs, which would brighten anyone’s day. He and his hugs are sorely missed by his many friends and family members.