Food, music, dance and family fun is celebrated by more than 500 people at Sobrato 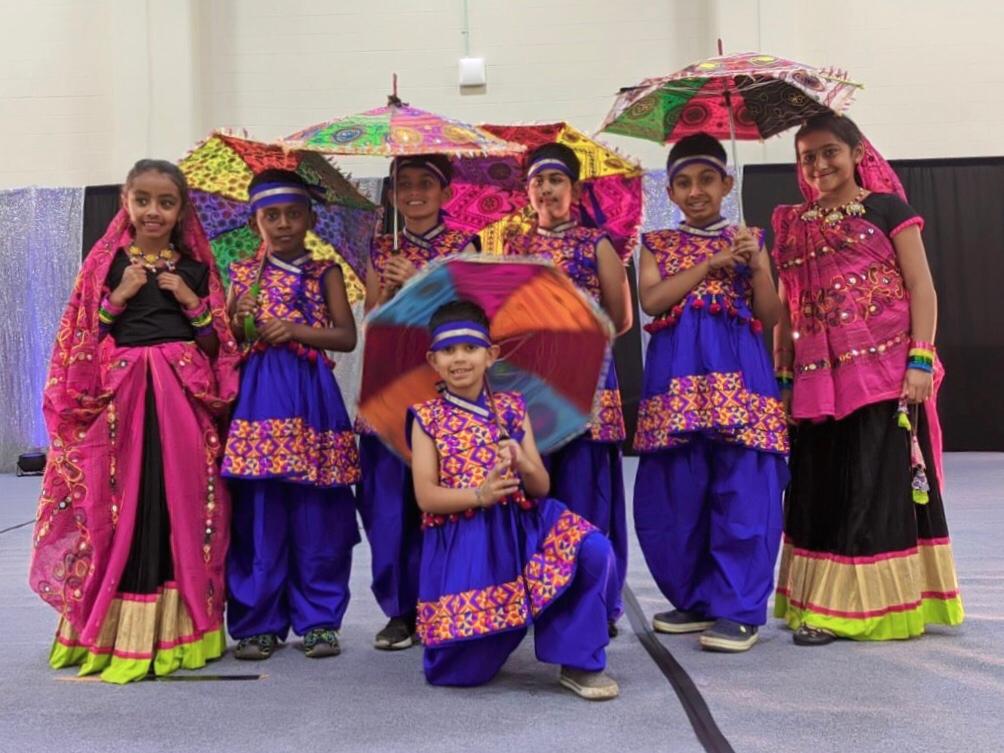 Diwali is India’s biggest and most important holiday of the year. Over the centuries, the festival has become a world-wide event enjoyed by many people of Indian heritage, including hundreds here in South Valley. 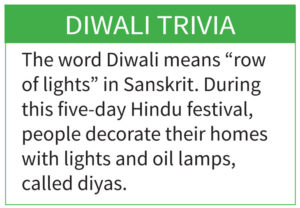 The word “Diwali” is derived from the row (avail) of clay lamps (deepa) that many Indians light outside their homes to symbolize the inner light that protects them from spiritual darkness, said Bharat Poria, a member of IASC.

“Diwali is a five-day celebration with the fourth day culminating in New Year, or the Indian Lunar Year,” he said. “It’s a nondenominational holiday. It’s recognized world-wide, just like we celebrate Christmas or New Year’s Eve.”

Hindus interpret the Diwali story based upon where they live. In northern Indian, they celebrate the story of Lord Rama’s return to the village of Ayodhya after he defeated the Sri Lanka emperor Ravanna. 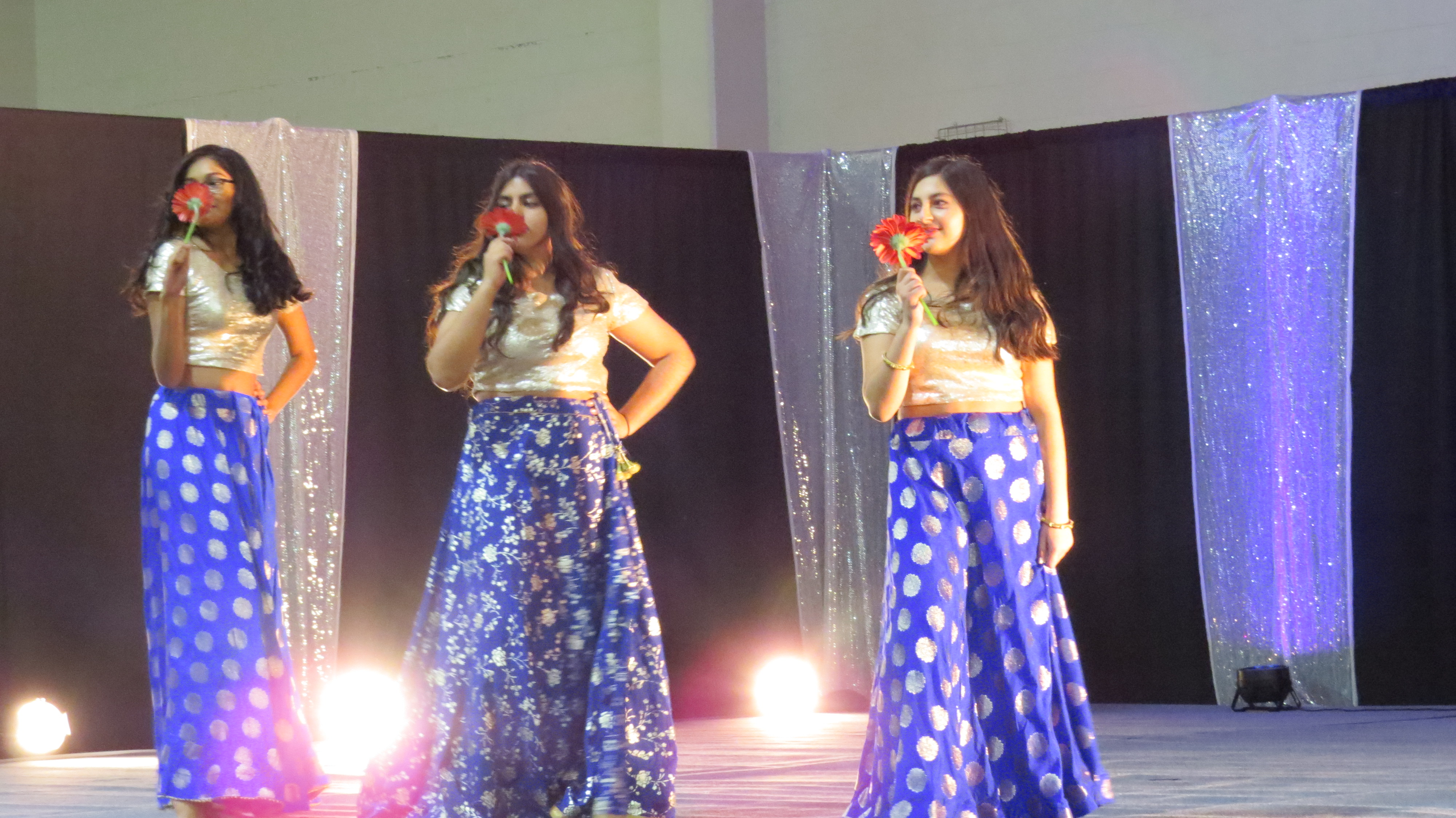 Dancers at the Diwali festival celebration pick up carnations at the end of their performance at the 25th Silver Jubilee celebration.
Photo by Marty Cheek

In southern India, people celebrate Diwali as the day Lord Krishna defeated the demon Narakasura. In western India, it marks the day Lord Vishnu (a god of the Hindu trinity) sent the demon king Bali to rule the nether world.

And Diwali traditions going back hundreds of years help connect people through the ages.

“We ring out the old and bring in the new,” he said. “We decorate our homes. We leave footprints inside our house with colors. We buy new clothes. We exchange gifts. We feed our guests with sweets and desserts. So that’s what Diwali is about.”

Sruchi Patel graduated from Sobrato High School and is living in Los Angeles as a college student. She came back to her hometown for the special festival.

“This year, I had no excuse to miss our Diwali celebration other than the fact that I was 300 miles away studying film and television at UCLA,” she said. “I booked a bus ticket to Morgan Hill, didn’t tell my parents I was coming, and then surprised them for the weekend. I wasn’t going to miss another Diwali celebration with my community.”

Teaching South Asians and non-South Asians alike about the meaning of Diwali through events like this is vital to break stereotypes, she said.

“Not only is it important we highlight South Asian celebrations such as Diwali but also Latin America’s celebration of Dias De Los Muertos or China’s Chinese New Year and so many others because that’s the only way we as community members can realize that we have so much more in common than we have different,” she said. “We’re all just here to celebrate our culture.”

Like with Christmas, people celebrating Diwali see it as a time where families and friends can get together and enjoy food and fun to celebrate what is good in the world, said Yashmi Mistry, who served as the cultural coordinator at this year’s South Valley Diwali.

“It’s a festival of lights. Everyone will put lights around their home welcoming Lord Rama into their house,” she said. “This is how I grew up. We would have a show like this every year where different age groups would come on stage and do different kinds of cultural dances. For me now, I want to teach the next generation a dance that I love from the bottom of my heart.”

The Diwali event at Sobrato was highlighted by 10 dance groups from Morgan Hill and Gilroy performing their choreographed dances reflecting the tradition of different Indian states. Mistry choreographed the “Pankhida” group, which consisted of boys in traditional outfits dancing in pretend stick fights.

“I want my kids to know that dance. With the sticks and stuff, it brings back so many good memories of when I was a child,” she said.

A catered buffet dinner included a menu that offered food from different states of India to show the inclusiveness of the event, she said.

“What’s really unique about the South County community (of Indians) is that people from all parts of India get together and celebrate together,” Mistry said. “Growing up for me, it was more exclusive. Everyone who is here has come from different places. It’s just amazing that we get to celebrate from all different parts of India.”

Monica Iyer, vice-president of the association, agreed that the spirit of inclusivity at the South Valley Diwali event makes it extra special for all to celebrate.

“India is a unique country where every state literally has its own dress, its own language, its own foods, its own culture and traditions. There is something called ‘Indianness,’” she said. “It’s important for us to celebrate and come together. It’s important for our kids to understand that, hey, I have roots that are similar to someone even though he speaks a different language, because we have something in common.”

The Indian Association of South Santa Clara County was founded 25 years ago and the community had about 60 attendees at their inaugural Diwali. The group has grown to close to 1,500 members and more than 500 people — including non-Indians and elected officials — attended this year’s Diwali, said Poonam Chabra, board president of the association.

“It’s grown big time,” she said. “And our goal right now is to not only expose our kids to the Indian culture but also to bring us more to the forefront such as having our community participating more in nonprofits and having our kids seek out and participate on city and county levels on civic levels. We’re very excited about where we’re moving forward.”