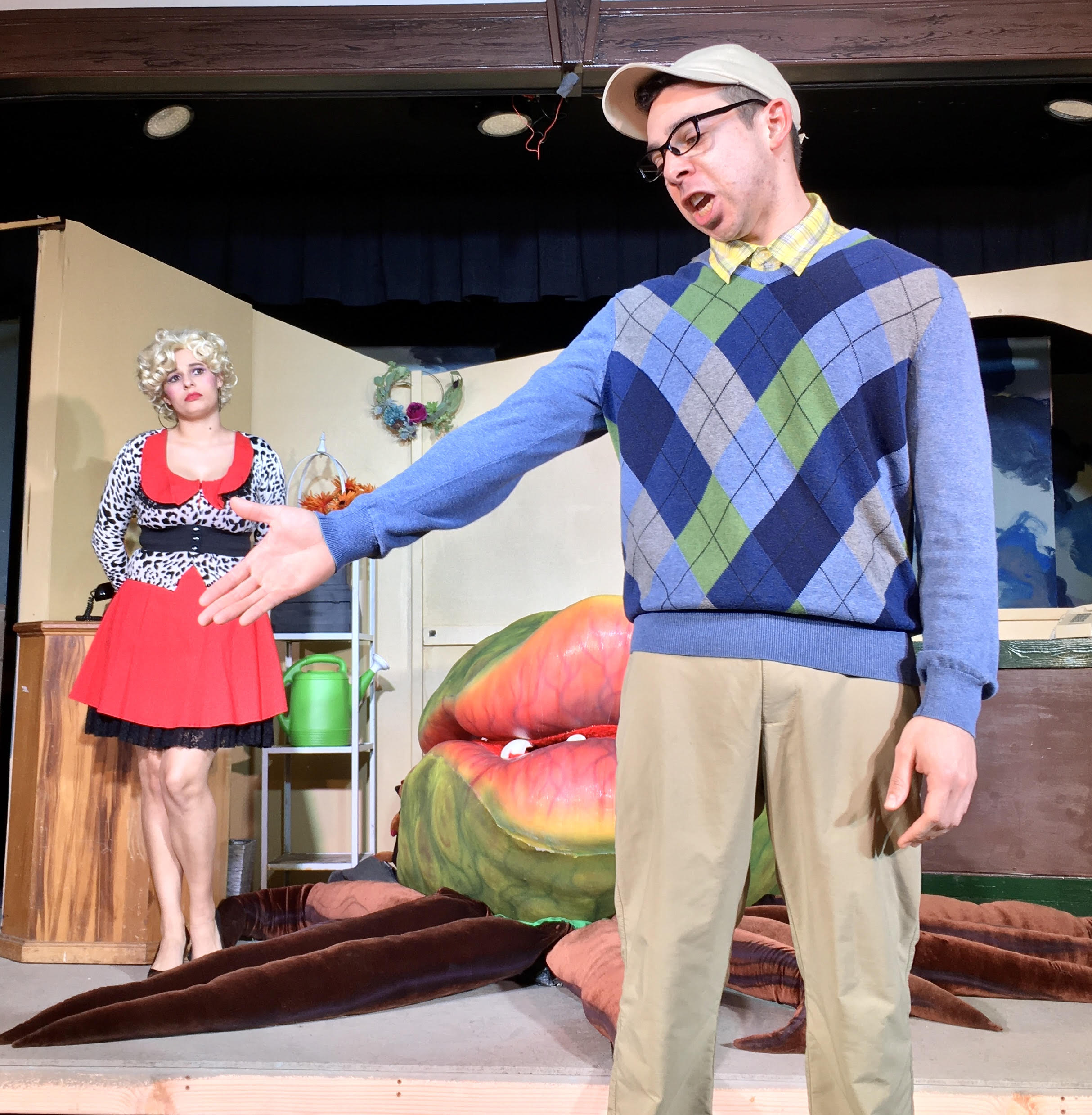 Chloe Angst, as Audrey, and Tyler Savin, who plays Seymour, during a dress rehearsal before shows began in early January. The play runs through Feb. 8.
Photo courtesy Pintello Comedy Theater

Watch out for Audrey 2! The man-eating plant invades Gilroy at the Pintello Comedy Theater in its production of “Little Shop of Horrors.” The show opens Jan. 10 and runs until Feb. 8. 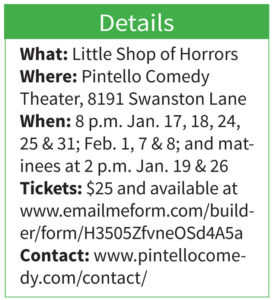 A horror comedy rock musical, the story focuses on a hapless florist shop worker in New  York City named Seymour who raises a talking plant that feeds on human blood and flesh. The show is based on the low-budget 1960 black comedy film by Roger Corman.

Guests at Pintello’s annual New Year’s Bash party got a sneak peek of “Little Shop of Horrors,” which director Whitney Pintello described as “the biggest, baddest musical comedy” the theater company has produced.

“The fable of the man-eating plant told through the retro doo-wop style of Alan Menken (“The Little Mermaid“) and Howard Ashman is a rousing romp fans will remember from the hit movie starring Rick Moranis,” she said. “It’s unique to see a show that’s usually bigger and bolder done in a tiny venue. For instance, some of the accommodations we make to bring that huge plant onto our small stage actually accentuate the size and scale of the monster.”

Pintello Comedy Theater performers were also surprised to find so much heart in the center the story of what is a campy show. There’s the question of what lengths a person would go to get out of Skid Row and rise up in their life.

The musical premiered in 1982 and had a five-year run at the Orpheum Theatre in New York City. Numerous productions in the U.S. and abroad, and a subsequent Broadway production, have been done over the years. 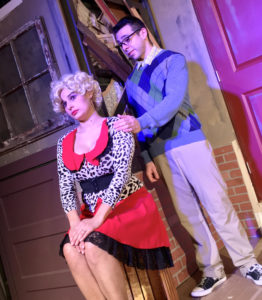 Because of its small cast, it has grown popular with community theater, school production and nonprofessional groups. Adding to its appeal is the 1986 film version directed by Frank Oz.

“I love it when locals come see our shows and realize that these are not professionals. We have people who are small business owners, Apple engineers, schoolteachers by day …” Pintello said. “And all of them choose to hone their acting craft at night. I love the rich talent pool that we have available locally and I think that’s what might impress locals that these are people just like you and me.”

The central role of Seymour the shop worker is played by Tyler Savin. He starred in one of Pintello’s world premieres some years back but has since emerged as an incredible vocal talent and has outstanding chemistry with Seymour’s girlfriend, Audrey, played by Chloe Angst. Savin and Angst worked together in “Cabaret,” a show where she portrayed the typically male-cast role of the emcee. 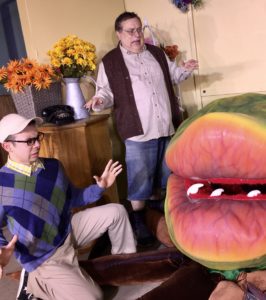 Photos courtesy Pintello Comedy Theater.
From left, Tyler Savin who plays Seymour, and James Swan who plays Mushnik, during a recent rehearsal for the upcoming show.

“Stunning performances came from both of them. I was really lucky that they have such a sweet chemistry on our stage as well,” Pintello said.

Pintello also took the usual trio of girls called “The Shoppettes” and made one of them a young man, creating “a really nice blend of voices.”

Another fan favorite for Pintello Comedy Theater’s audiences, Dave Leon, who is also the vocal director, plays the voice of Audrey 2 to pure comic effect. The unique thing about his portrayal is that Pintello decided he should also be the master puppeteer of the large puppets.

“Typically, a puppeteer is employed in addition to the singer who lip-synchs,” she said. “Dave took on the role of both, and it truly enhances the personality we get out of what others might see as an inanimate toy.”