Measure A: Future of Madrone Village in the hands of voters 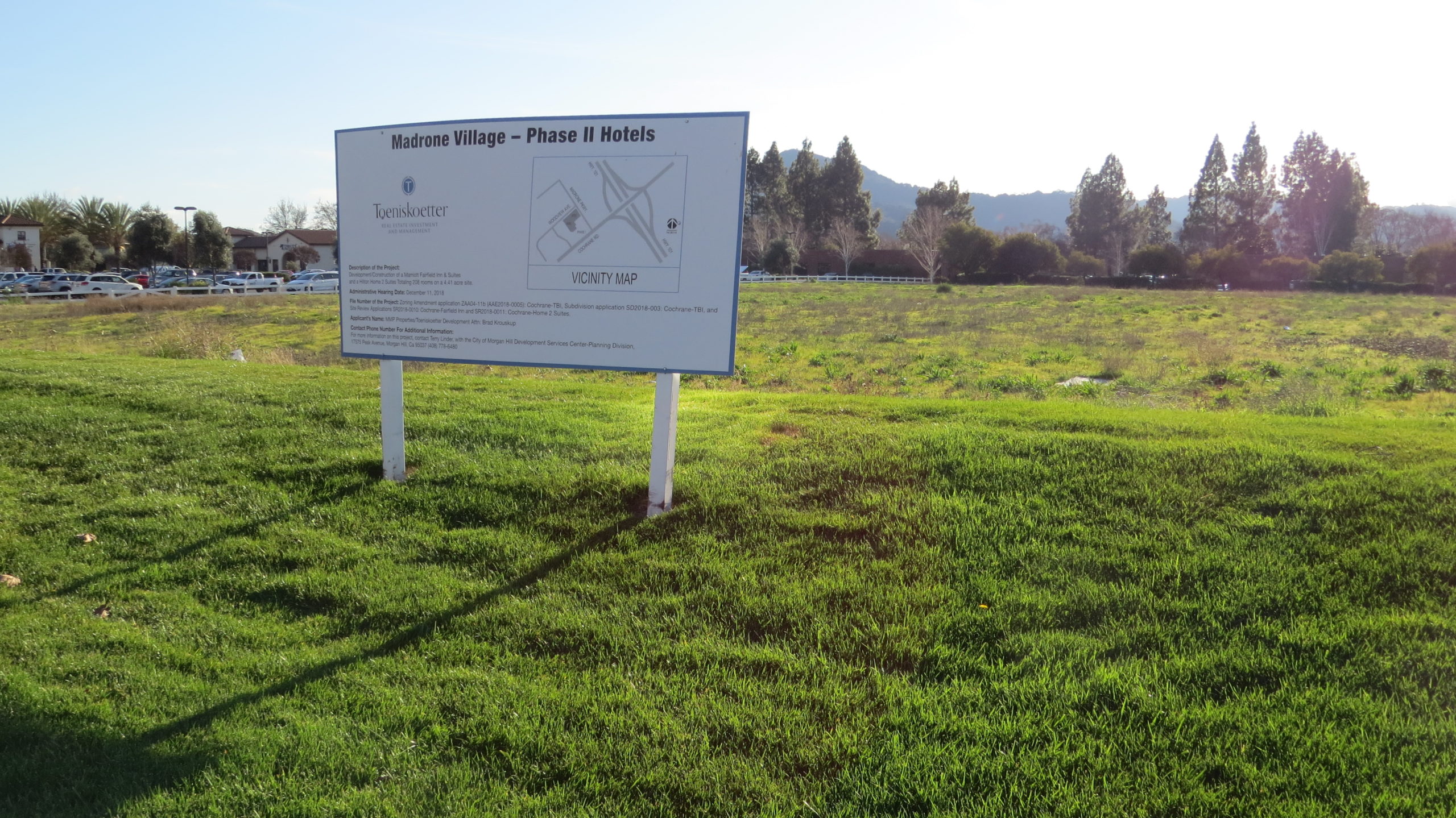 Voters will decide March 3 if two hotels will get built on land off Cochrane Road.
Photo by Marty Cheek 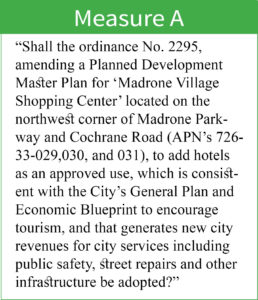 Faced with a looming $7-million annual deficit, the city needs money from the Transient Occupancy Tax from hotels to pay for essential services. Some local hoteliers, however, claim building the proposed hotels (with more than 200 rooms) in a crowded market will hurt their business and barely move the needle on the deficit.

The decision to classify the 4.4-acre plot at Madrone Parkway and Cochrane Boulevard to allow for construction of two four-story hotels was first raised Dec. 11, 2018 at a meeting of the Planning Commission. A year ago, councilmembers unanimously approved the change. Shortly after, a petition calling for a referendum began circulating, started by a collective of local hoteliers calling themselves the Hotel Coalition. Asit Panwala, a San Francisco-based lawyer whose parents own the Comfort Inn, is the spokesperson for the Hotel Coalition, which opposes Measure A. Panwala said he prefers  the land  be the site of a grocery store.

“A lot of people have said they would love to see a Sprouts or a Whole Foods there,” he  said. “In 2016 we updated the city’s general plan, and that was our plan for the next 20 years.”

According to Edith Ramirez, director of economic development for the city, the developer couldn’t find a grocery store interested in the location.

“The developer tried that for years,” she said. “The market wasn’t there.”

In 2015, the city commissioned Hotel Appraisers & Advisors to analyze Morgan Hill’s hotel market. The firm found there were 792 rooms spread across the city’s 13 hotels. In a section comparing the occupancy rate of the city’s top five rated hotels against national averages, HA&A concluded the numbers “indicate substantial unaccommodated demand.”

“The study essentially said, ‘Yes, there is room for more hotels,’” Ramirez said, a position echoed by the city.

The Hotel Coalition’s opposition to Measure A is simply a tactic to try to keep out competition, she said.

“The idea that we’re anti-competition or anti-hospitality is hogwash,” said Andrew Firestone, the developer behind the La Quinta Inn & Suites. Firestone is a founding board member of Visit Morgan Hill, a tourism-promotion group.

“I would love to see Morgan Hill grow,” he  said. “But I want to see it grow smartly. Just building hotel rooms doesn’t do anything to attract visitors.”

Along with Panwala, Firestone claims the city’s survey is outdated, as it doesn’t take into account either the La Quinta, which added 104 rooms to the market in 2017, or the two additional hotels already slated for development outside Madrone Village: the 65-room Granada Hotel + Spa at Monterey Road and First Street, and Evergreen Village, a 20-acre development at Cochrane and Butterfield described on www.choosemorganhill.com as “Retail Services/Office/Medical Offices/Hotel.”

With all three new hotel options taken into account, any additional hotels, will simply spread existing demand over a larger net, he said.

Independent of Measure A, both Firestone and Panwala said demand is already declining.

In their analysis, HA&A highlight two indicators as signs of a hotel market ready for expansion: an average occupancy rate of 70 percent or higher, and Revenue per available room (RevPAR)  higher than $90.

Firestone, however, said La Quinta’s RevPAR experienced negative growth for 10 of the past 12 months.

At the Comfort Inn, Panwala said, sales have also been on a negative trend, adding that despite $600,000 in renovations in 2016-2017, occupancy rates at the 53-room, upper-midclass hotel have been hovering below the necessary 70 percent figure quoted in the report.

Tensions between the Hotel Coalition and the city have been high for at least a year now, with both sides accusing the other of misinformation and questionable tactics. During the signature gathering period, the city said petitioners allegedly misled the public with fears of traffic jams and crime.

“I’m not able to watch every single one of them each time they’re out,” he said. “But I was out there many times and they were saying the right things.”

The developer hired people to shadow the signature-gatherers and talk people out of signing the petition, an act that transformed the process into public confrontation several times, Panwala said.

“We did hire folks to pass out literature,” said Brad Krouskup, president and CEO of Toeniskoetter Development Inc., which owns the land in Madrone Village. “There were some situations where there were debates in front of retail locations and things like that.”

At heart, the issue boils down to TOT dollars, 100 percent of which go to the city’s General Fund. A fact sheet distributed by “Yes on Measure A” states the additional 200 rooms at Madrone Village would generate “$700,000 to $1,000,000 annually in new hotel taxes.”

Figures obtained by the Hotel Coalition through public records requests show total TOT revenue was slightly more than $2.75 million in 2018-2019. The 200 hotel rooms Measure A hopes to add would represent a 22 percent increase in total rooms available. Were revenue to increase by the exact same amount, it could put TOT numbers close to the quoted $700,000 – $1,000,000.

“Their theory is ‘If you build it, they will come,’” said Panwala, quoting the 1989 movie “Field of Dreams.” “But if you drive by our hotels in the evening, you’ll see they’re very empty. Who’s coming to Morgan Hill in a rainy January? Not many people.”

This observation is validated by the city’s 2015 hotel market report. In a section titled “weaknesses,” HA&A concluded that Morgan Hill’s “leisure demand appears to be highly seasonal, with relatively weak weekend occupancies between November and February.”

If voters reject Measure A the city will need to reduce the deficit in other ways including possibly cutting public services, Ramirez said.

There’s more on the line.

“The loss is greater than revenue,” she said. “Local companies depend on having an adequate supply of hotel rooms to do business. We have all these amenities here, and we need a robust, healthy, inventory of hotels.”