Photo courtesy PJIFF
“Bullied” director Thomas Keith in post-production. A screening of the film will take place April 2 at the PJIFF.

As our community continues to recover from the tragic events of last year’s Garlic Festival, the Poppy Jasper International Film Festival has decided to devote a special screening in April to a film that addresses divisive and hurtful actions. The feature-length film “Bullied” gives a voice to an often-silent segment of our society:  those who are aggressively — and often repeatedly — intimidated, abused, or dominated by others.  This important film will lead into a panel discussion of the problem of bullying and some proven solutions. 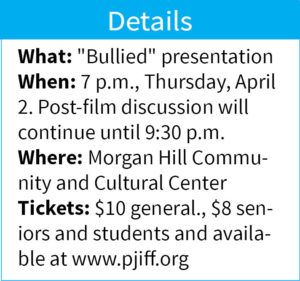 With the help of scholars from throughout the U.S. and through interviews with survivors of bullying and families grieving the loss of a child bullied into suicide, “Bullied” director Thomas Keith shows us not only the effects of bullying on the victims and their victimizers, he also explores successful ways of counteracting bullying in schools, where it often begins. Keith has agreed to attend this special screening and participate in the panel discussion afterwards.

“It is a thrill and honor to get the opportunity to discuss the issue of bullying with audience members at the Poppy Jasper International Film Festival in April,” he said. “My hope is that we can be part of a national and international discussion about how to mitigate the rates of bullying and self-harm among young people worldwide.”

Gilroy City Councilman Fred Tovar will moderate the discussion after the film. The panel also includes distinguished scholars and two of the parents interviewed in the film: 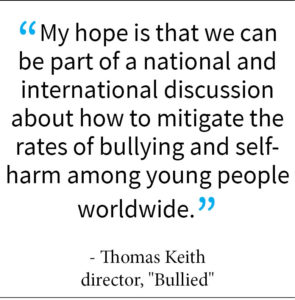 “I’m excited to be part of this difficult but important topic,” Tovar said. “I hope you will join us for this life-changing event and by taking a stance against bullying. I am extremely proud to build on our commitment to making Gilroy, Morgan Hill, all of South County and the entire world a kind and safe community for everyone.

“It has become a severe and dangerous issue and affects those young and old, and we need to speak up, stand up and help stop bullying. We may not be able to stop bullying in its entirety, but we can surely prevent it from happening as often. It’s time we hold each other accountable and continue to send the message that it is not acceptable.

“As Theodore Roosevelt once said: ‘Knowing what’s right doesn’t mean much unless you do what’s right.’”

We couldn’t agree more. Please join us for this important event.

Marilyn Pifer is the chair of the PJIFF film jury.  She lives in Morgan Hill.