Revenue streams will be reduced by at least $12.2 million depending on how long pandemic lasts 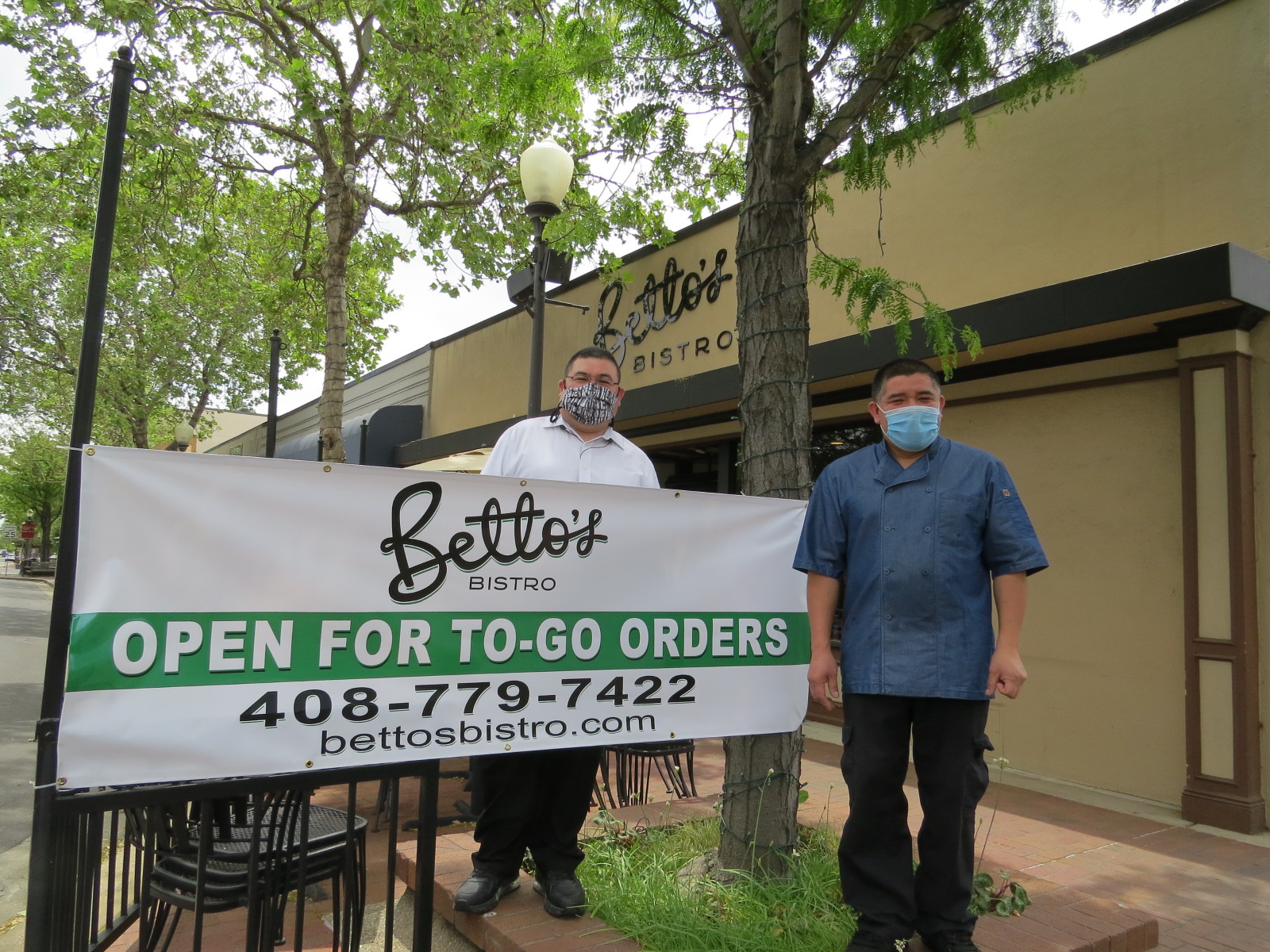 Photo by Marty Cheek
The owner of Betto’s Bistro Norberto Hernandez (right) and Roman Olvido, bartender, outside the downtown restaurant, which began curbside pick up in late April. With businesses suffering financially by COVID-19, the city’s sales tax revenue has taken a hit.

The COVID-19 pandemic will impact the quality of life in Morgan Hill for years to come. With revenue from sales and hotel taxes and recreation fees significantly hurting due to stay-at-home orders, the city is preparing its next two-year budget with an eye to reducing services and staff.

The city projects significant hits on its revenue stream in five major areas resulting in a total reduction of $12.2 million during the course of three fiscal years starting July 1, 2019. Sales tax revenue will get hit the hardest with a total loss of $4.8 million. Community development funds, a special revenue fund used to account for services supporting private development activity, will go down by $2.8 million. Recreation services revenue will drop by $2.1 million. The hotel tax revenue will be reduced by $1.7 million. And property taxes will go down by $800,000. 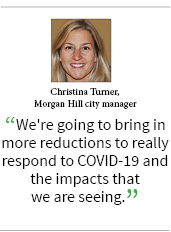 The projected loss to the General Fund is based on an assumption that the stay-in-place order will end May 31, so the numbers might increase if the pandemic continues its devastation of the economy for more months, City Manager Christina Turner warned. The impact on the local economy by COVID-19 amplifies a fiscal hit on the city as prior to the pandemic it was facing  a $7-million annual deficit.

In the opening letter of the recommended budget, Turner said the document reflects the ongoing realities of the impact of COVID-19 with the city expecting significant revenue loss.

“The pandemic’s impact on the global and local economy, coupled with existing unfunded needs and the loss of revenues from the city’s Residential Development Control System,  has negatively impacted the city’s budgetary outlook in a substantial way, and a lot sooner than originally projected,” she wrote.

To address the shortfall, the city implemented a hiring freeze, with the exception of critical vacant public safety positions. The recommended budget includes deferment of some building maintenance projects, reduced contractual services, and a draw down on the General Liability Insurance Fund to supplement the expected increase in unemployment insurance claims.

Compared to the 2008 financial crisis, the COVID-19 impact on the economy is worse because it was so quick in shutting down so many stores and restaurants and reducing business and leisure travel, said Dat Nguyen, the director of finance for the city.

“In 2008 and 2009, you could see it gradually happening. With this one, everything just came to an abrupt end,” he said. “The big difference during the time of the Great Recession, recreation services, which is part of General Fund revenue, actually went up. But with COVID-19, recreational services saw a dramatic reduction.”

Nugyen hopes the impact of the coronavirus on the economy will be shorter than the Great Recession if businesses can be restarted, but that depends on how the disease spreads during the rest of the year.

“What we worry about is the potential second wave, we just don’t know,” he said. “We just have to keep monitoring and analyzing and revising the numbers as they come.”

The COVID-19 impact on revenue will force the city to cut or postpone programs and projects, Turner said. After the Santa Clara County Health Department issued a shelter-in place order March 17, the city furloughed 76 part-time temporary employees and 22 regular staff members. Many of these were in the recreational facilities. Some contractual services such as janitorial and maintenance were also reduced.

“We’re going to bring in more reductions to really respond to COVID-19 and the impacts that we are seeing,” the city manager said. “Yes, we have a reserve (of about $18 million). But we already had fiscal needs above and beyond what was programed into our budget. So this just complicates things.”

Recreation programs and services has long been a big source of revenue for the city and COVID-19 has forced the closure of the Centennial Recreation Center, the Aquatics Center and the Community and Cultural Center, which is rented out for events and meetings.  The city is not receiving the membership dues as it has delayed the April draw from accounts and might continue doing that depending on stay-in-place orders from the county.

The TOT is generated by the occupancy rate at the hotels, which now stands at about 20 percent. The hotels typically see about 70 percent of their rooms filled. The city projects that total revenue coming in over the course of two years will be about $1.7 million.

“This assumes a gradual picking back up where people are going to be traveling again and the Outdoor Sports Center opens up and we’ll see tournaments and construction picks up and workers will stay at our hotels,” Turner said. “This number has the ability to grow bigger in revenue loss if it takes the economy longer to pick back up.”

The Hale Avenue extension project will not be impacted because it is primarily funded by Measure B, a county bond passed in 2016. Grant projects like that and projects funded by impact fees are not going to be impacted.

COVID-19’s impact on the economy will be felt by residents of Morgan Hill for a few years. “It’s going to be a long road to recovery,” Turner said.