Slight uptick in some crimes, including commercial burglaries and stolen vehicles 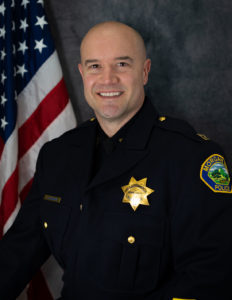 Early in April, Shane Palsgrove went from captain to interim chief of the Morgan Hill Police Department when David Swing left the top-cop position to work as the chief in Pleasanton. Palsgrove took on the new position at a time when the COVID-19 crisis forced tens of thousands of local residents to begin following shelter-in-place orders.

A month into the job, he briefed the public in an April 30 Zoom video-conference hosted by Morgan Hill Chamber of Commerce CEO Brittney Sherman about crime and safety in the city during the pandemic.

“When I took office four weeks ago, during the first two weeks of the COVID-19 shelter in place we saw a dramatic drop in crime with everybody sheltering in place,” he said. “And then we saw an uptick in crime regarding graffiti, family disturbances, and stolen vehicles. While we haven’t had an uptick in violent crimes, we did have two violent crimes during the shelter in place that required the police department to bring in some extra resources.”

With the coronavirus keeping business owners at home, the city saw a rise in commercial burglaries. MHPD officers made several arrests.

“We arrested a commercial burglar who was breaking into markets. In seven different cities, they broke into multiple stores, breaking the windows and stealing the lottery tickets,” Palsgrove said. “We had four of those incidents here in Morgan Hill. The officers found the person as they were leaving the scene and after a pursuit and a foot chase they were able to arrest those commercial burglars.”

Other arrests were made of burglars who broke into dental offices and two hair salons, two suspects stealing from a downtown business, and two burglars breaking into cars. Commercial mailboxes on residential streets where broken into by thieves looking for stimulus checks. Officers pursued a suspect in a suspicious vehicle on San Pedro Avenue but that person got away.

“Make sure that you’re getting your mail daily and sign up for the informed delivery through the U.S. Postal service,” Palsgrove recommended.

The police department has been monitoring the complaints from residents about possible stay-in-place order violations. At the meeting, he said about 174 complaints were brought to the department’s attention but most turned out to be essential business or exceptions to the orders, Palsgrove said.

“By and large, our community is really paying attention to what is being done to prevent the spread of the virus,” he said.

The department is also working with the Morgan Hill Downtown Association to make sure restaurants have parking available in front of their sites to help with the facilitation of curbside food delivery.

Some residents have gathered at locations on Monterey Road to protest the stay-in-place orders with signs and American flags. These protests are acceptable under the order, he said.

“People are allowed to protest so long as they are social distancing,” he said.

Social experts have warned about the possibility of an increase in domestic violence during the COVID-19 crisis as people feel added stress with loss of work, reduced income and cabin fever. The numbers of domestic violence crime are down compared to this time in 2019, he said.

“Last year we had 11 incidences. This year we’ve had six,” he said. “You would think just the opposite because everybody is home together. We have seen family disturbances increase a little bit. Last year there were 21, this year there were 26.”

He recommended that if people need assistance in dealing with the stress of the crisis on their relationships, they should contact Community Solutions, the leading agency in South County to provide counseling resources and intervention for domestic violence. The main number is (408) 779-2113 and the domestic violence hotline is (877) 363.7238. The youth and family crisis line is (408) 683-4118.

“By and large, the community is really coming together,” Palsgrove said. “I think everybody is really focusing on lifting each other up during this time and finding unique ways to bring joy to each other whether it’s painting rocks, or t-shirts, or yard signs, delivering food.”

It is still uncertain when the restrictions on social movement will be lifted because medical experts are still gathering and analyzing data on the COVID-19’s impact on people’s health. When the time comes to open businesses and allow community events, it will be done in phases, Palsgrove said.

“So far as the businesses, I think we will transition to businesses becoming open but still adhering to the (social) spacing and wearing masks,” he said. “I think the police department will slowly ramp up with their contacts in the public. It’s going to be a slow progression between now and the end of the year. It won’t be an immediate change, it will be gradual.”