Community comes out in support of beloved volunteer battling cancer

Cricket Rubino, center, surrounded by members and alumni of the Emerald Regime Marching Band and Color Guard, who offered their support and love as she battles cancer.

Longtime Morgan Hill volunteer and community proponent Cricket Rubino received a happy surprise Memorial Day morning with a special parade of friends who wanted to wish her well in her battle with cancer.

Mike Rubio, Cricket’s husband, brought her outside on the sidewalk in front of their house on a pretense and had her stand under the shade of a tree. The parade began with a small marching band of Live Oak High School drum corps alumni that serenaded her with a trumpet solo of the Frank Sinatra classic song “My Way” as a group of Live Oak color guard alumni spun Emerald Regime flags in circles. A line of 61 cars, headed by five police SUVs and a motorcycle cop, then passed by, people shouting out greetings such as “Stay strong!” and “Love you, Cricket.” Many of the vehicles featured home-made signs and were decked out with creative decorations like balloons to express their support for Rubino. 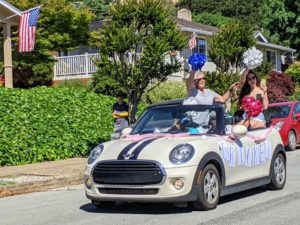 “I was totally surprised. How do you have a parade with this many people in one town and I didn’t know anything about it?” she said. “This is great. I haven’t seen anybody so this is really wonderful. Gosh, I actually haven’t been out of the house except for doctors’ appointments and treatments, so this is really special. It’s really cool. I got to see so many people that I haven’t seen for a long time.”

The Cricket’s Parade organization was led by Sherry Hemingway. Roger Knopf and Theresa Kiernan organized the parade line-up and Jan Hagemann and Byron Kelly conducted the secret invitation distribution. Rubino’s friends in the parade all met at the Morgan Hill Library parking lot at 9:30 a.m. At 10 a.m., the parade reached the street at the base of El Toro where the Rubinos make their home.

“Cricket Rubino is truly one of the most loved women in Morgan Hill. That’s why with short notice, a socially-distanced, surprise parade on Memorial Day fell together so easily,” Hemingway said.

For her lifetime of volunteerism and community service, Cricket was to receive Leadership Morgan Hill’s “Leadership Excellence Award” at a dinner in her honor in July. Then along came both the pandemic and Cricket’s diagnosis of lymphoma, a treatable and curable form of cancer, Hemingway said. The gala dinner has been postponed indefinitely.

“We timed the parade related to a certain chemo treatment that Mike said she was dreading, scheduled for the day after Memorial Day. We can only hope yesterday’s love is carrying her through today,” Hemingway said.  “Once it was clear that the parade had reached a considerable size, the MHPD agreed to give us a hand with traffic. MHPD Acting Chief Shane Palsgrove said the officers were delighted to be able to greet the woman who had shepherded each of the officers through Leadership Morgan Hill. We started on the dot — and wrapped it in 13 minutes!”

Rubino’s involvement with the Morgan Hill community is extensive. She spent 27 years assisting her husband, Mike, as color guard coach for the Live Oak High School Marching Band, winning a national championship. When her two children attended P.A. Walsh Elementary School, she supported them through Home and School Club and School Site Council. Since 2002, Rubino has supported the YMCA as a board member and president. She launched her own home-based business offering outsourced administrative services in 1995 and ran it for 17 years.

Rubino also got involved with the Morgan Hill Senior Center. When the recession hit in 2007, the city cut the Senior Center budget by $30,000. With other Senior Advisory Committee members, she spearheaded fundraising efforts that nearly covered the shortfall.

Rubino was chosen as the Morgan Hill Chamber of Commerce’s Woman of the Year in 2013.