Social distancing during the COVID-19 pandemic may be particularly hard for some people. With stressors such as job loss and domestic issues with shelter-in-place orders, the coronavirus crisis may be contributing to the dramatic rise in the fentanyl-related deaths and substance use in the past several months.

Fentanyl is an opioid 30 times stronger than heroin and as much as 100 times more powerful than morphine. It is a killer. Deaths are on the rise in Santa Clara County from the improper use of this highly addictive substance. We encourage the South Valley community to be aware of the danger of this potent painkilling medication. 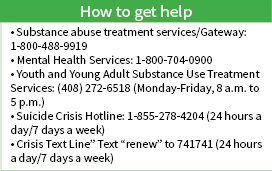 In the first five months of this year, 19 fentanyl deaths have been reported in Santa Clara County. Compare this with the same period last year when there were seven deaths. In 2019, a total of 29 fentanyl deaths were reported in Santa Clara County. Ages of those who died in 2020 range from 16-56 years of age, with 10 of the 19 fentanyl-related deaths in the 16 to 25 age range.

Exposure to even small amounts of fentanyl can cause overdose and death. Exposure to the drug is so dangerous that CDC requires first responders to wear protective gear if fentanyl is expected at a scene. Police officers have found themselves accidentally overdosed when they unintentionally came in contact with the substance at traffic stops.

Legitimately-made pharmaceutical fentanyl is approved for treating severe pain. Fentanyl is also used in fake pills and in powder form made by counterfeiting organizations. Several of this year’s deaths have been linked to fake pills containing fentanyl, made to look like a 30mg oxycodone prescription pill. Many people take these pills for pain misbelieving they are taking the less addicting oxycodone, unaware they may contain lethal doses of fentanyl.  Even one pill, a fragment of a pill or one snort can be fatal.

Health experts recommend that no one take an opioid pill that was not obtained directly from a pharmacy. Pills given by a friend or bought from non-pharmacy sources should never be taken. Most pills on the street are fake that are made by counterfeiting organization to look like real prescription medications. They come in different types, shapes, and colors. Many of the fake oxycodone pills are blue, circular tablets marked with a “M” in a square on one side, and a “30” on the other. Fentanyl is also available in a powder form which is as dangerous and deadly. County law enforcement agencies have seized pure powdered fentanyl and routinely find fentanyl as an additive in other street drugs such as methamphetamine and cocaine.

The Santa Clara County District Attorney’s Office and law enforcement agencies across the county have discovered fake pills containing fentanyl may be in wide circulation. County and state officials have seized large quantities from multiple locations. A rapid response collaborative team has been established in the county with representation from Behavioral Health Services, District Attorney’s Office, Health and Hospital Systems, Medical Examiner, and Public Health. This collaborative team is working together to investigation recent deaths.

The nation needs our state and national leaders to improve our drug policies because too many people are dying from misuse and abuse of these substances. We need to find ways for law enforcement to better target the supply of fake pharmaceuticals, preventing them from hitting the streets. We also need to develop better treatment programs to help users free themselves from the slavery of drugs. We also need to create effective marketing campaigns to educate all Americans, and especially young people who tend to be more experimental, about the dangers of “recreational” pharmaceutical drug use. Drugs legitimately made for sick people should not be considered a way to have “fun” with a chemical high.

Most importantly, we need pharmaceutical companies to be responsible in the marketing information they push to the public as well as doctors who might prescribe their opioid products to patients. In the past, pharmaceutical companies have advertised their pills as “non-addictive” when in truth they had the opposite effect. In 2007, Purdue Pharma paid $634.5 million in fines for falsely claiming the powerful painkiller OxyContin was less addictive and less subject to abuse than other pain medications.

We need to alert healthcare providers, schools, parents, young adults and youth, community-based organizations, and residents that services are available for those who are struggling with stress and substance use issues including fentanyl. The County of Santa Clara Behavioral Health Services Department is available to help.