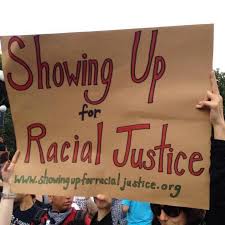 By Showing Up for Racial Justice South County

On Sunday, May 31, in downtown Morgan Hill, SURJ South County (a chapter of Showing Up for Racial Justice) organized a peaceful protest/vigil over the horrific death of George Floyd, an African American man from Minnesota, by a white police officer. While we were showing up for this atrocity we were also showing up to speak out against racism, particularly the treatment of black Americans at the hands of police.

We were shocked and pleased by the more than 150 people from throughout South County that included a very diverse mix of ethnic groups, ages, genders and backgrounds. They turned out to express similar sentiments, hefting signs that said such things as “End White Silence” and “Black Lives Matter.”

Since our chapter, SURJ South County, formed in 2016, we have held a number of vigils, protests and two big marches. But this time feels like a tipping point for positive change.

So many of you turned up in person, despite COVID-19, with masks on and signs in hand. So many of you gave expressions of hope and support as you drove through town.

For some of you, we realize that turning up was a first — the first time you had publicly raised your voice. For some it was an act of courage under a cloud of how ugly protests had become in other places.

For some it was a joining with like-minded spirits. For some, a desperate need to voice your anger and pain. For all of us, it was a statement. A statement that, as Fannie Lou Hamer says, “Nobody’s free until everybody’s free.” We cannot become complacent again.

We are proud of the Morgan Hill and Gilroy residents who showed us where they are ready to stand in this time of challenge and controversies. We must take this energy and motivation to keep on fighting for social justice.

This time it must be sustaining and for the rest of our lives. We appreciate that the Morgan Hill Police Chief Shane Palsgrove made a public statement condemning George Floyd’s death, and we will continue to hold our police accountable to anti-racism and de-escalation training.

SURJ South County is also not alone in this stand for justice. Other groups, such as the Morgan Hill Peaceful Protests, Indivisible, and more are showing up, planning their own peaceful protests or standing alongside us.

In Gilroy, hundreds of protesters rallied peacefully in downtown June 1. They marched along the city’s sidewalks chanting and waving signs. The protesters made their way to the Gilroy Police Department’s headquarters and stood there respectfully for about a 30-minute period of time before returning to the downtown district.

We are stronger together. Now the work begins. As we emerge from the challenges of COVID-19 that disproportionately affects people of color and hear the cries of our friends of color and really look at the murder of black Americans, we have to choose how to go forward.

We must lift up the most vulnerable and marginalized, and we have to do it together. We invite you to join us.

Though SURJ national was formed as an organization meant to draw white people into the work of anti-racism (since people of color have spent their lives fighting structural racism and they can’t do it alone). SURJ South County is a multi-racial chapter of the organization that works together. We welcome and encourage dialogue with the community, as education is one of our missions.

To attend a future meeting (our next one is at 2 p.m. Sunday, June 28, online), you can ask to join our Facebook group “SURJ South County.”

Meanwhile, to continue the work, we recommend a couple of books as a starting place:

“So You Want to Talk About Race,” by Ijeoma Oluo; “How to Be an Anti-Racist,” by Ibram X. Kendi; and “White Fragility: Why It’s So Hard for White People to Talk About Racism,” by Robin D’Angelo.

This column was written by a group from SURJ South County, a local group of individuals organizing people for racial justice. Through community organization, mobilization, and education, SURJ promotes all people to act as part of a multiracial society for social justice with passion and accountability.