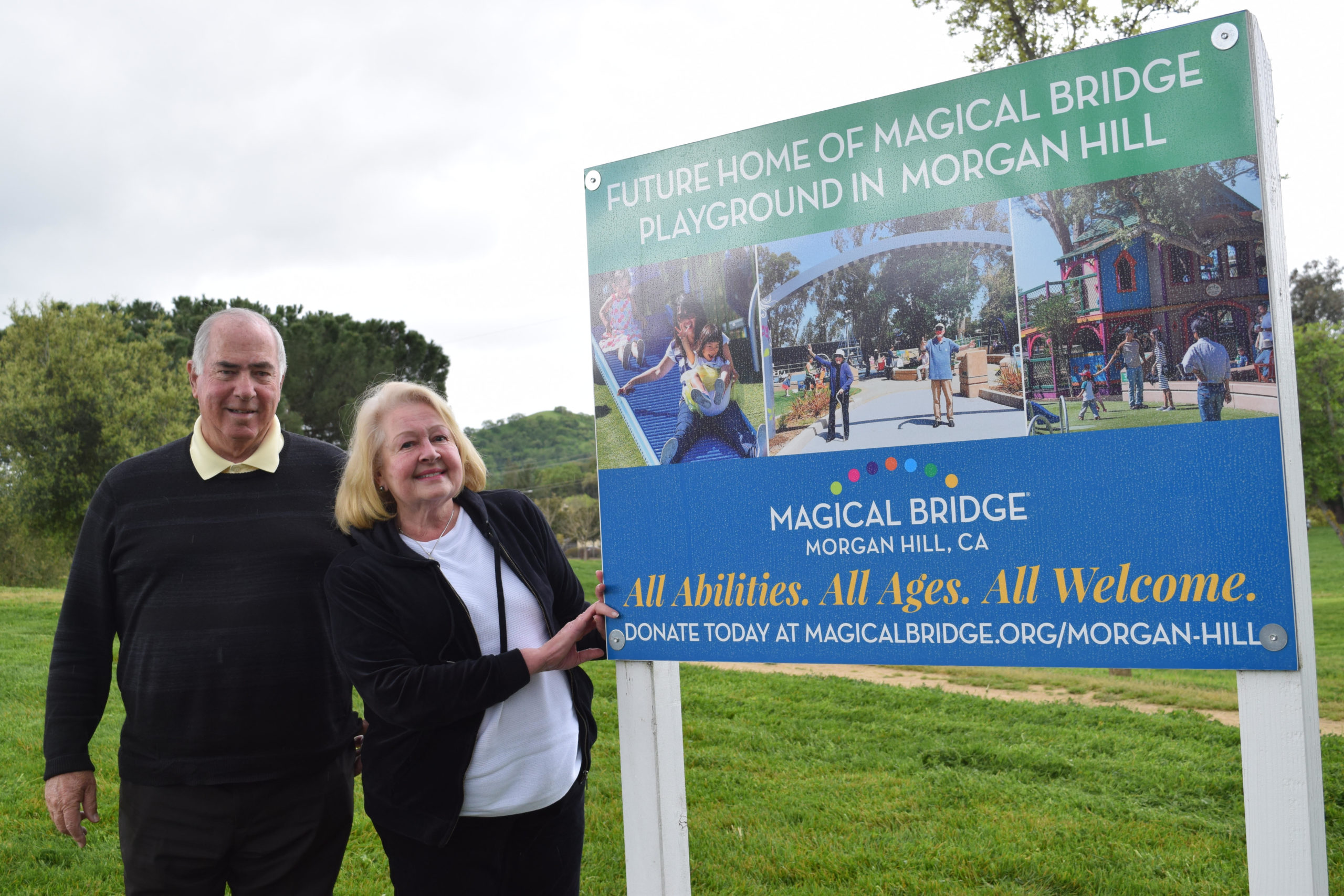 Gilroy Life file photo
Ron and Shirlee Locicero in front of the sign at Morgan Hill Community Park where the Magical Bridge Playground will be built.

The long journey to building an “inclusive playground” for South Valley families will reach a major milestone with a virtual groundbreaking ceremony scheduled for 10 a.m. Friday, June 19.

The Magical Bridge Playground will start construction this summer in Morgan Hill’s Community Park and is expected to be completed next summer.  It will be the first inclusive playground in the stretch between San Jose and Salinas, a point of pride for the Morgan Hill community and the many volunteers who participated in the project including several from Gilroy.

For several years, Ron and Shirlee Locicero have worked with the Palo Alto-based nonprofit Magical Bridges, the city of Morgan Hill and a team of volunteers to create the playground,  which is designed with equipment that can be used by children with special needs both physical and mental. Through their efforts, $5.3 million was raised to fund the project. Contractor CRW Construction won the bid to build the playground. Ron joined the city’s Parks and Recreation Commission to get the project going. 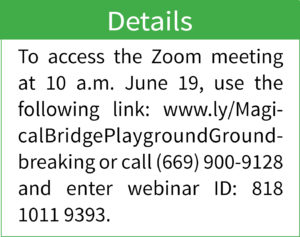 “Shirlee and I are thrilled,” he said of hearing that work can now begin. “We waited many, many years to have groundbreaking and we had quite a few delays through no fault of anybody. It was just the way it worked. We’re anxious to see the park open next summer.”

Families are expected to come from Gilroy, San Martin, Hollister, southern San Jose and elsewhere, with as many as 20,000 visitors a year anticipated, he said.

Even though it will be done on the Zoom video-conference platform for social distancing purposes because of COVID-19, it will be a special moment for South Valley, Ron said.

“Finally, the dream becomes a reality,” he said. “Up until the time they start throwing the dirt around, it’s still subject to being not finished. Something could come up to stop it just like we lost three or four months here because of the virus. Now everything is signed, sealed and delivered.”

The virtual groundbreaking ceremony will mark the official start to the construction of the Magical Bridge Playground project at Community Park. The playground will provide Morgan Hill residents and visitors of all abilities and ages with a space to play, said Chris Ghione, public services director for the city.

“We’re excited to announce the virtual groundbreaking for the Magical Bridge Playground in Morgan Hill. Especially during this time, we hope this project is a sign of hope for our community for future opportunities we’ll have to celebrate inclusivity and play in Morgan Hill,” he said.

The recent Covid-19 crisis has greatly impacted the city’s finances. The city is going to need the community’s help to continue to maintain the park once it is open. This help is needed in the areas of continued fundraising and future commitment to volunteer. The city is planning to start an endowment fund for future park maintenance and any funds raised for the park as we move forward will go to that fund, Ghione said.

This is another chance for those who have not already donated to get their name on the donor wall or those who have contributed to increase their donation. All funds raised will be used for future park maintenance.

In addition to donating, those who are able to commit their time after the park opens can begin signing up to volunteer now. The community needs its residents’ help to keep the new playground magical for the long term.

“These past few months have underscored our need to connect with one another, and the real power of kindness,” shares Magical Bridge Foundation founder and CEO Olenka Villarreal. “For those living with disabilities, the disconnection from community has been challenging. It’s one of the many reasons our foundation is excited about the announcement to break ground in Morgan Hill’s Community Park, a place where everyone will soon be welcomed to play — all ages and all abilities. This day would never have happened without the strong leadership from the County Board of Supervisors, the Morgan Hill mayor and city councilmembers, and the many generous families who collaborated with us to bring this new kind of play space to life.”

Living in today’s unprecedented times has required new thinking on health and safety practices particularly in public spaces. The city of Morgan Hill and the Magical Bridge Foundation are committed to ensuring that everyone feels safe and welcome when visiting the Magical Bridge Playground in Morgan Hill.

Morgan Hill City Council unanimously approved the Magical Bridge Playground in 2017, committing to obtain $2 million in funding. Community Park rests in the heart of Morgan Hill and welcomes residents and visitors of all ages. Magical Bridge Playgrounds are designed to meet the needs of everyone, including the one-in-four people living with visible or invisible disabilities.

For more information or to make a donation to support the project, visit www.morgan-hill.ca.gov/magicalbridge.