Editorial: Let us celebrate together all that is good in America

As the United States prepared to enter into “The Great War” in Europe, New York State Commissioner of Education Henry Sterling Chapin came up with the idea of creating a national creed to describe the principles and beliefs America is founded upon. He launched a countrywide writing contest with a $1,000 prize to encourage citizens to put into words our national creed to promote patriotism and a sense of civic responsibility.

Of the more than 3,000 submissions, the winning entry came from William Tyler Page, who had worked in the U.S. Capitol Building as a page boy and would go on to become a clerk in the House of Representatives and have a 61-year career there. His creed was described as “brief and simple but remarkably comprehensive of the best in American ideals, history, and tradition, as expressed by the founders of the Republic and its greatest statesmen and writers.” Page recited the “The American’s Creed” on the Capitol steps in 1917: 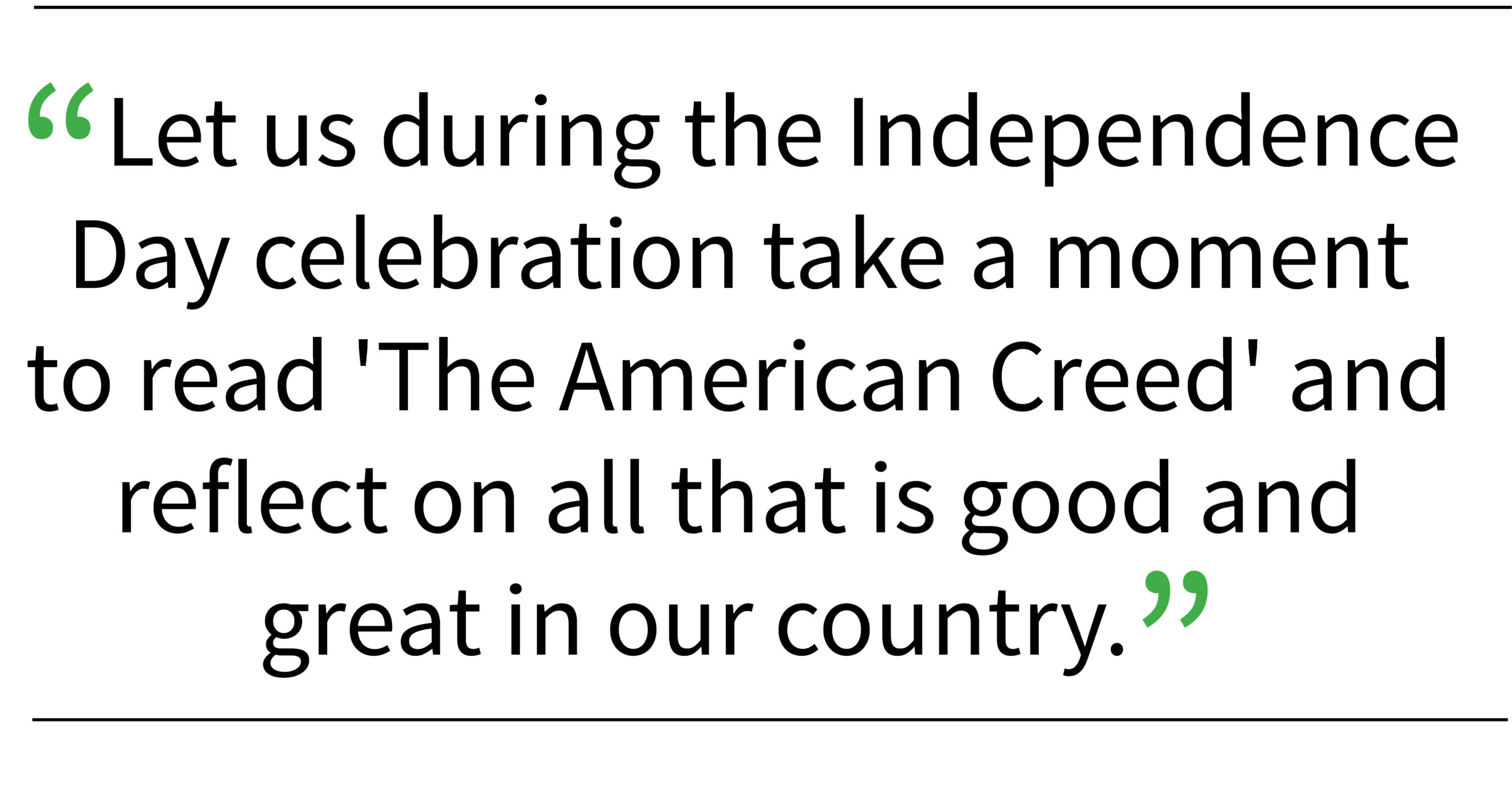 “I believe in the United States of America, as a government of the people, by the people, for the people; whose just powers are derived from the consent of the governed; a democracy in a republic; a sovereign Nation of many sovereign States; a perfect union, one and inseparable; established upon those principles of freedom, equality, justice, and humanity for which American patriots sacrificed their lives and fortunes. I therefore believe it is my duty to my country to love it, to support its Constitution, to obey its laws, to respect its flag, and to defend it against all enemies.”

This Fourth of July, we encourage our readers to take some time to consider the words of “The American’s Creed” and how they might apply it in their words and actions not only on Independence Day but every day. We are in a time of decline in our feelings for patriotism for America, a dangerous trend for democracy. A part of this decline is due to the rising cynicism many Americans have toward the political discord that pervades our government, a cynicism largely fueled by the antagonistic messages that are distributed in news and social media platforms.

Every year, Gallup releases a poll on July 1 that shows a sense of the nation’s patriotism. As we go to print with this issue, it is still too early to know what the 2020 poll shows, but no doubt considering the national angst we have been seeing of late with the COVID-19 crisis and the protests against racism and police brutality, this year’s survey will reflect even more the plunge in patriotism that we have seen of late. Last year’s poll revealed that pride Americans have in the U.S. hit its lowest point since the first measurement in 2001. While 70 percent of U.S. adults overall in 2019 said they are proud to be Americans, fewer than half – 45 percent – stated they are “extremely” proud. That was the second consecutive year below the majority level.

The survey showed that Democrats lag far behind Republicans in expressing extreme pride in their country. In 2019, 22 percent of Democrats reported they felt “extreme pride,” the group’s lowest polling in Gallup. This number was half of that in the poll taken five month before the 2016 election. Some 76 percent of Republicans surveyed last year said they felt extremely proud of their country.

In another survey done last year, this one conducted by the McCourtney Institute for Democracy, we can see a sharp dichotomy about patriotism based on age.  Some 75 percent of Americans age 65 and older believe it is important for citizens to be patriotic. Only about 20 percent of 18- to 29-year-olds feel the same way. This is a sad state for our nation’s future. Part of this feeling could be attributed to the possibility of young people being confused between the differences of “patriotism” and “nationalism.” George Orwell wrote an essay sharing his thoughts on patriotism where he wrote:

“By ‘patriotism’ I mean devotion to a particular place and a particular way of life, which one believes to be the best in the world but has no wish to force upon other people. Patriotism is of its nature defensive, both militarily and culturally. Nationalism, on the other hand, is inseparable from the desire for power. The abiding purpose of every nationalist is to secure more power and more prestige, not for himself but for the nation or other unit in which he has chosen to sink his own individuality.”

Being patriotic and expressing feelings of pride in America is a good thing for all our citizens to do. Let us during the Independence Day celebration take a moment to read “The American’s Creed” and reflect on all that is good and great in our country. When we do we will surely realize, despite the challenges we now face as a nation, we still have much to appreciate as a people.