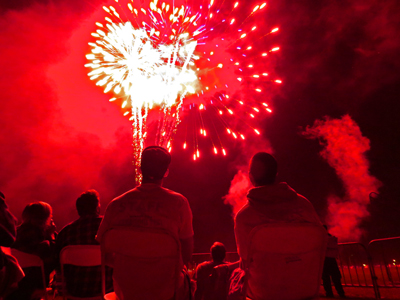 As the blackness of night covered South Valley July 4, the sky over Morgan Hill bloomed and boomed with colorful explosions as hundreds of illegal fireworks were launched. About 11 p.m., a wildfire started on the east side of Anderson Reservoir. Throughout the night, the flames consumed dry grass and brush and spread across more than 345 acres as teams of Cal Fire firefighters worked to contain it.

No Morgan Hill residents or homes were in danger. For safety sake, the people living in 10 homes along Finley Ridge, an area located in the county, evacuated. 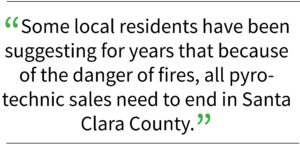 The next day a much bigger wildfire, stirred by afternoon winds, started along Crews Road in the eastern side of Gilroy. As of July 10, it consumed about 5,400 acres of grassland, destroying one home and forcing the evacuation of residents.

As we go to print, the causes of both fires are not known and still under investigation. Given the high number of fireworks shot skyward during the holiday weekend, it’s likely pyrotechnics set them off. On the Independence Day night, dozens of other small fires burned across the Bay Area after thunderous and relentless fireworks displays.

This Independence Day holiday we saw more illegal fireworks shoot off than usual. The MHPD received 113 calls from people reporting their use. Seventeen citations were issued for illegal fireworks. Many community fireworks shows were cancelled due to the COVID-19 crisis. (Gilroy held its annual fireworks show at the Gilroy High School and residents watched from a distance using social-distancing protocols.) With the pent up energy from months of shelter-in-place,  people wanted to let loose with the excitement of explosions in the air.

Some local residents have been suggesting for years that because of the danger of fires, all pyrotechnic sales need to end in Santa Clara County. Gilroy is the only city that allows these sales. Nonprofit organizations and schools use them for fundraising, setting up 15 booths where for the first four days of July they provide the “safe and sane” kind — novelties, fountains and sparklers —  enjoyed by families.

There are several restrictions on the sales. Purchase is only by Gilroy residents and use is only within Gilroy city limits in approved areas. They must not be taken to any other city or unincorporated area of the county where they are illegal. It is also illegal to throw or launch safe and sane fireworks into the air.

If used wisely and according to the guidance of city regulations, safe and sane fireworks pose little threat to lives and homes. The real danger comes from the illegal fireworks. These make very loud explosions and/or fly through the air or across the ground. They include cherry bombs, bottle rockets, Roman candles, M-80s, firecrackers and any aerial pyrotechnic. One danger to people using most illegal fireworks is that they don’t fly as high as the commercial fireworks shot off in community fireworks displays so after they explode the embers can land on flammable material while still hot.

People have to go out of their way to acquire illegal fireworks. That means they understand they are breaking the law. The lawbreakers during the Independence Day celebrations need to know they face prosecution to the full extent of the law and financial liability for the damage they cause. However, catching the perpetrators can be difficult. By the time a police officer reaches the site, the persons responsible have either fled the scene or deny they did it.

Modern technology might help in reigning in illegal fireworks us. Some cities have started using drones. The Elk Grove Police Department this year deployed an unmanned aerial system to patrol city skies during the Fourth of July weekend. A pilot and a spotter for each drone watch with a bird’s-eye view for the flash of fireworks being shot off. This year was the first time the city deployed this technology for fireworks monitoring and the results were mixed because it was difficult to confirm exact addresses. The system, however, narrowed down the specific location to an apartment complex and with that information, the officers were then able to drive into the complex and try to locate the people who were responsible. The presence of the police units coming into the area did stop the illegal fireworks activity quickly, which is the real goal.

Perhaps drone technology can one day advance for police department use so these aerial units can collect the booming noise of illegal fireworks exploding and thus “triangulate” the location of the launch. The public can also get into the act with citizens sending information such as photos and GPS coordinates to the dispatch center through phone apps, another useful tool for stopping illegal fireworks use.

Working together and using technology more effectively, we can prevent the use of illegal fireworks.