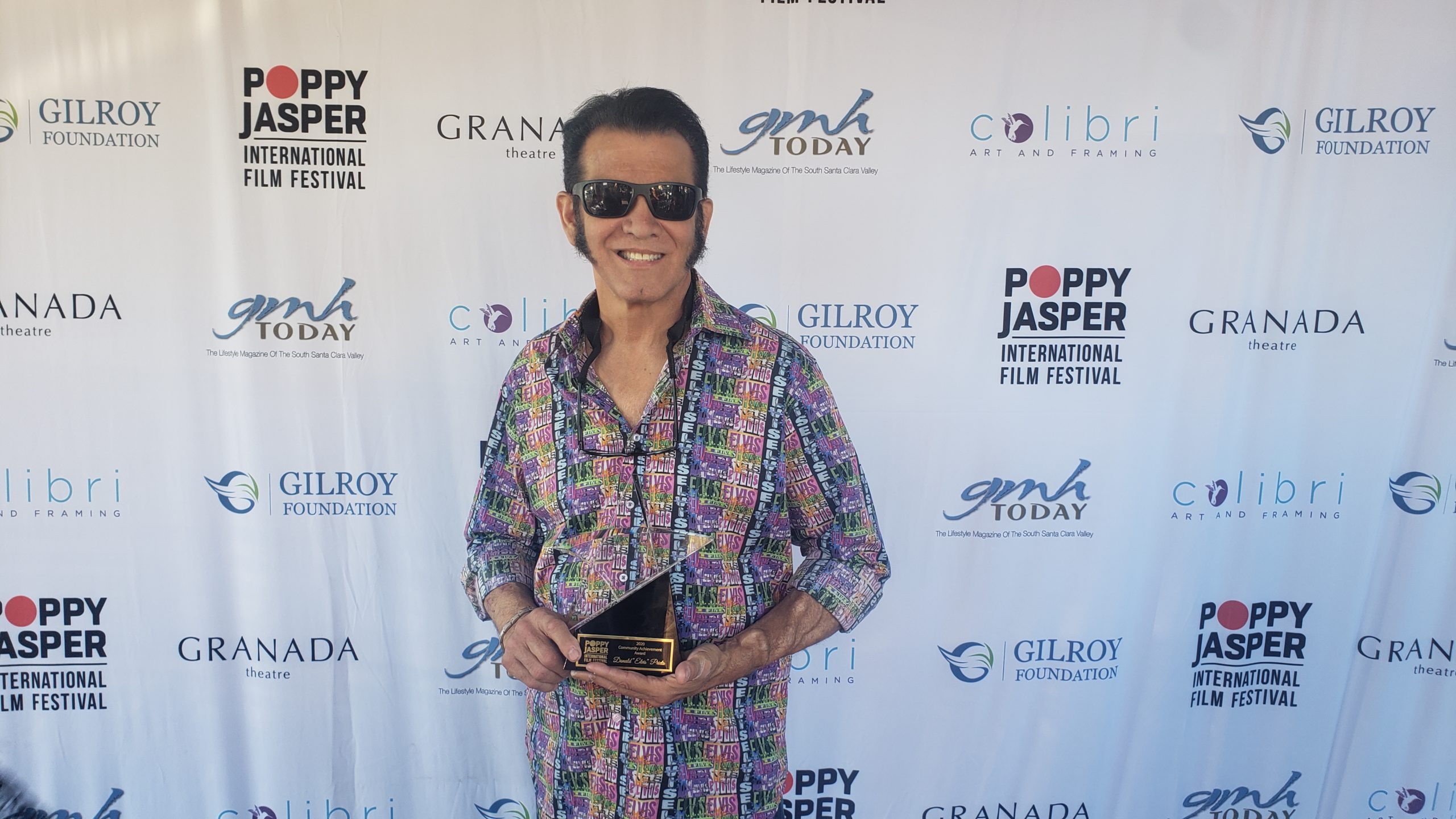 Donald Prieto at the award ceremony where the Elvis tribute artist was given the 2020 Community Achievement Award July 9.
Photo by PJIFF

Raven-maned and tailored in a 1970s-style Elvis sequin jumpsuit, Don Prieto has spent countless hours in the Presley persona. A legend in the South Valley, the tribute artist loves the thrill of giving a curl of the lip and a sly wink of the eye to his fans as he belts out the beloved songs the King of Rock ‘n’ Roll made famous. 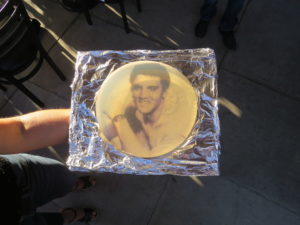 A cake with the King of Rock ‘n’ Roll’s image for the award ceremony.
Photo by Marty Cheek

For his dedication in helping local nonprofits — including some in Morgan Hill — raise funds for the past three decades, the Poppy Jasper International Film Festival presented the longtime Gilroy resident with its 2020 Community Achievement Award July 9. Organizers originally intended to give him the honor at the festival in April, but the COVID-19 pandemic cancelled the event this year. Instead, they showed him their love at a special event in the parking lot outside Victoria’s Mexican Restaurant, which is owned by Prieto’s parents and where he performs as Elvis on Thursday nights.

The Gilroy man got his start as the man from Memphis in 1992. The next year, he competed in a contest of 25 guys to see who might be the best Elvis Presley tribute artist. He came in second.

At one point, he was doing 15 to 20 shows on weekends. Before a show he sat in his car and listened to Elvis music to get in the mood

At the “drive-by” awards ceremony, Gilroy Councilmember Fred Tovar read a few remarks to the attendees, describing Prieto as “a role model and a man of distinction” over the years that he has been impersonating Elvis throughout the Bay Area.

“It’s no secret that taking time out of your busy life to give back to your community is a good idea,” he told Don. “But for some people, giving back is not only second nature but also their life’s work and to me that is how I would describe Gilroy’s very own Donald.

“People will smile when they think of you forever. Kindness, gratitude and warm feelings will return your way. That seems so small to say to someone so largely impactful in many lives. You are a humble person with the world’s biggest heart. You have become not only an inspiration to me, but to many in Gilroy.”

Many years ago, Tovar was introduced to Prieto as “Elvis” and recalls it seemed like meeting one of his idols.

“You stood so tall and so strong, even then. Your smile and performances lit up the room and you instantly could make a room of strangers feel like longtime friends,” he recalled. “You always have had that power to make us all one and form a better world just purely from being you . . .  I’m honored to call you a friend.”

The Poppy Jasper organizers had hoped to present the award to Prieto at a more formal setting during the festival but the coronavirus prevented that from happening, said Maria Cid, the board’s president.

“We really wanted to do this at the film festival where Elvis can shine even more than he does right now. But we’ll do it again when we can put on our festival next year,” she told the crowd. “I just want to say, Donald, it’s a privilege to really know you. We’re really thankful and grateful to have you have a friend, as a community leader and as a role model for our children.”

The world we live in would be a much better place if more people were like Donald Prieto, she said.

“He makes us see the very best in people and in life, the way no one else can,” she said. “I feel the best version of myself when I’m around him.  That’s the kind of effect he has on me and our community.”

Mattie Scariot, the director of the festival, has been friends with Prieto since they first met at Gilroy High School.

Even back then, she saw how Prieto was developing his charisma and outgoing personality that would serve him well as a tribute artist of the music legend. The Poppy Jasper Community Achievement Award came about when the festival organizers decided the event needed to tie itself back to all the cities that host filmmakers and film lovers.

This year, other people who had been scheduled to receive awards include:

“Not only do we create educational programs that bring people in that wouldn’t normally be a part of the festival, but we also recognize the people in our community who are doing amazing things,” Scariot said. “That list is always long.”

Prieto stood out on the list because he has given so much joy as Elvis and it comes so naturally to him.  He makes it look easy, she said.

“When he’s on stage he gives a part of himself at each performance which takes a lot of energy. The incredible thing about Don is, regardless of the size of the audiences, he forms a connection that I really cannot describe. The feeling is incredible when you watch him perform — the room comes alive!  He touches something deep inside of you that you did not know was there. His generosity and thoughtfulness will always be remembered.”

One reason the Poppy Jasper board decided to present the award to Prieto now is because he is seeking a donor to replace a failing kidney. Since transplant surgery can sideline a patient for several weeks, the board wanted to give Donald his award when he’s able to receive it in person.”

As the audience cheered Prieto at the award ceremony at Victoria’s, Scariot expressed her affection for her friend.

“You are a legend here. You formed a legacy here that will continue forever. I just wanted to make sure that I can say to you, ‘I love you, and I think the world of you,’” she said as she emotionally wiped her eyes.