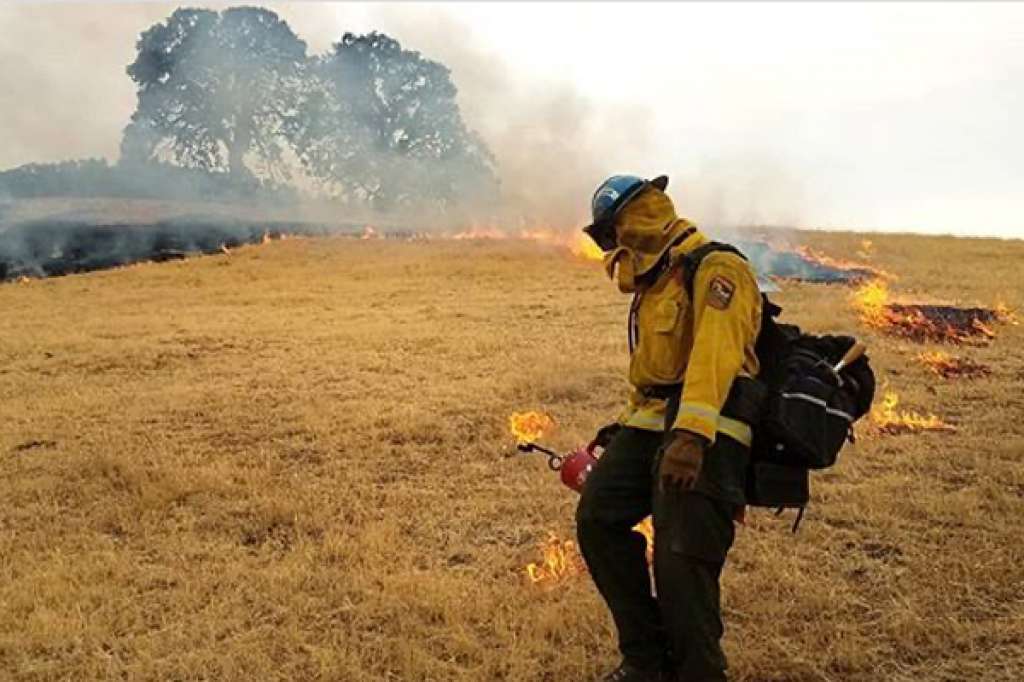 With more than 391,578 acres burned and 78 percent containment as of Sept. 4, the Santa Clara Unit Lightning Complex Fire is now the second largest wildfire in California history. So far, most of the burning has occurred in wilderness areas in the rugged Diablo Range east of the South Valley. About 105 structures were destroyed. There has been no loss of life.

The evacuation orders and warnings in the South Valley region continued until the end of August as the threat to lives and property remained, Cal Fire officials said in a virtual community meeting held the evening of Monday, Aug. 24. It included officials from the cities of Gilroy and Morgan Hill

The SCU fire spread throughout seven Bay Area counties and fighting it has been a collaborative and cooperative effort, said Morgan Hill Fire Chief Jake Hess, who serves as the Cal Fire unit chief for the SCU fire. He is in charge of organizing the combat of what he described as a “mega-fire” because of its unprecedented size.

Multiple dry lightning strikes, as many as 1,800 to 2,200, hit the Bay Area Aug. 16, 17, and 18 igniting the brush and grass dried by the drought and triple-digit temperatures the week before. Another storm system moving north along the coast was predicted to possibly hit the region with more lightning and gusts of winds during a 24-hour period starting Sunday, Aug. 23, causing an evacuation of several neighborhoods in the hills off East Dunne Ave-nue in eastern Morgan Hill. One strike from this storm caused a half-acre fire that was quickly contained. 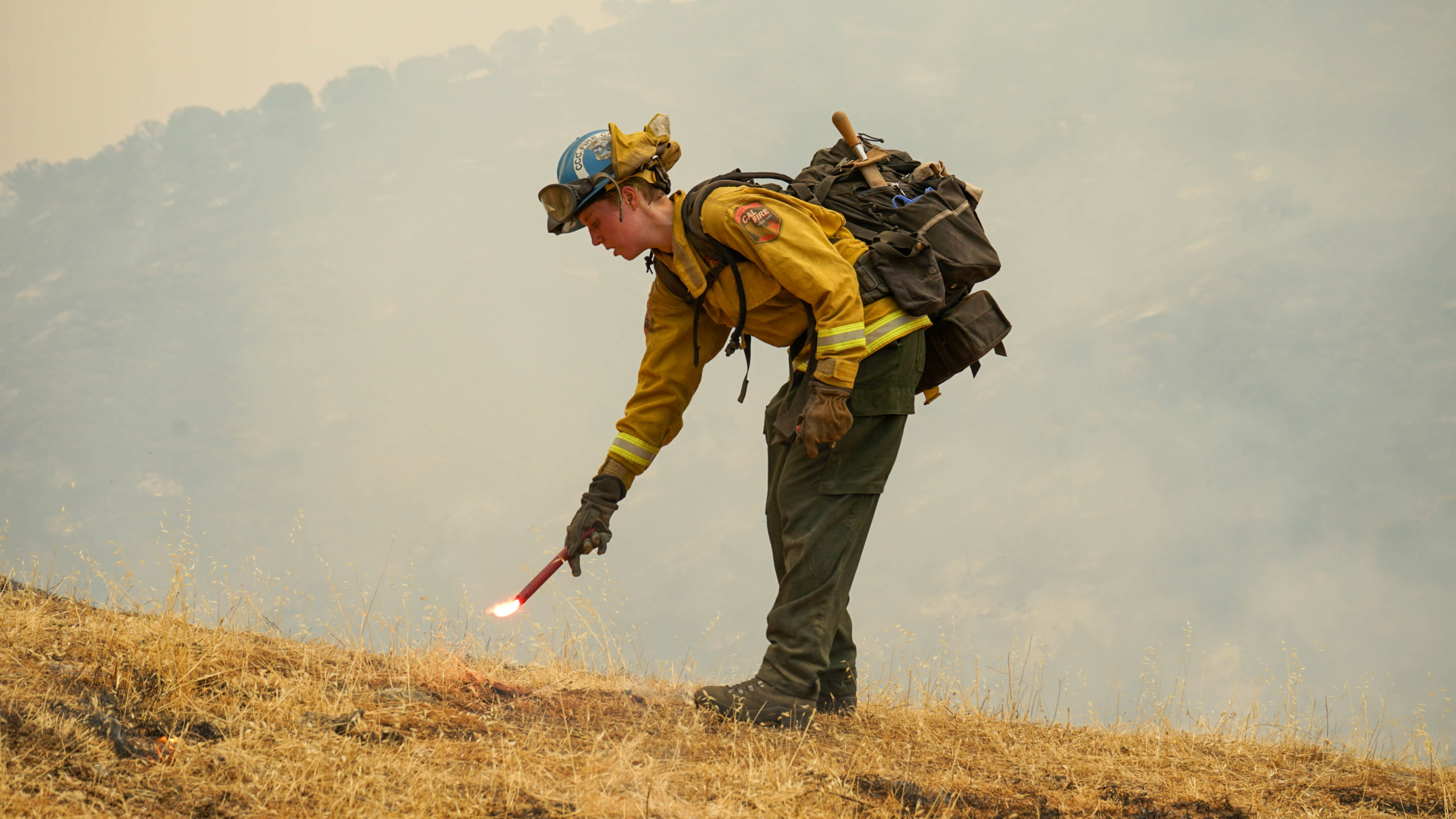 The evacuation orders for the three neighborhoods were lifted 5 p.m. Monday Aug. 24 by Cal Fire.

“Our No. 1 priority is life safety, that’s for the public and the firefighters,” Hess said during the meeting. “Throughout this summer, we are going to be continuing to evacuate people more often and earlier. It is inconven-ient. It is not perfect. We’re working through multiple systems throughout the county. Just know we always err on the side of public safety and we’re going to continue to do that.”

In the month of August, California faced as many as 700 wildfires throughout the state as of Friday Aug. 28. This vast number depleted resources and manpower as Cal Fire forces were stretched thin.

The CZU Lighting Complex Fire in Santa Cruz and San Mateo counties as of Sept. 4 covered 85,746 acres and is 48 percent contained. It has killed one person and destroyed more than 1,490 structures, including several in Big Basin State Park. At 81 percent containment as of Sept. 4, the LNU Lightning Complex Fire in five North Bay counties covered 375.209 acres. It has killed five people and destroyed 1,490 structures.

Cal Fire lacks the use of low-risk inmates to help in fighting these fires because the COVID-19 pandemic resulted in many of them being released a few months ago. Firefighters from other states including Arizona, Idaho, Oregon, Washington, and Texas have arrived to help in the fight. In addition, firefighters from Canada and Australia also helped. Nearly 200 corpsmembers with the California Conservation Corp trained in wildland firefighting dug lines and back-burned to reduce fuel.

Much of the SCU fire burned in Henry W. Coe State Park. Crews working on the west side built a fire line pro-ceeding south from the Alum Rock area in San Jose toward Gilroy.

“This is a marathon and not a sprint,” said Cal Fire Chief Mike Blankenheim of Fire Team Six, which has a crew of about 60 people working on containing the SCU fire along its western perimeter. “This is going to take us a while to get all the way around.”

So far, record-breaking wildfires have torched 1.6 million acres across California. This is twice what the state ex-perienced in 2019. More than a thousand homes and structures have been destroyed. Tens of thousands of Cali-fornians were forced to evacuate their homes and find temporary shelter elsewhere in hotels or friends’ homes. The Ann Sobrato High School campus served as an evacuation gathering point. 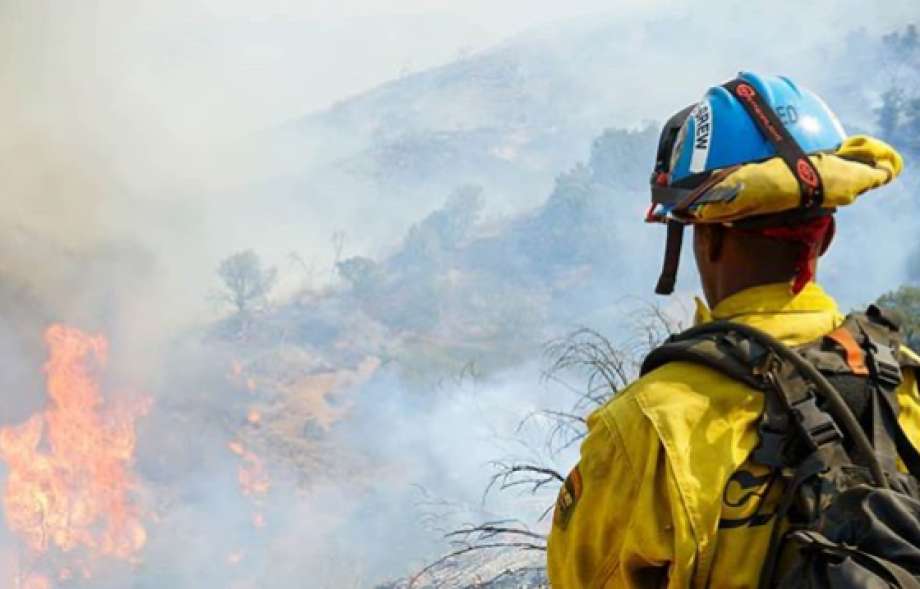 “Make no mistake about it. The fire that you’re dealing with in your county and your community is probably going to be the first or second largest fire in the state of California’s history,” Blankenheim said. “Clearly, it’s a signifi-cant event in California. To top that off, this is not the only incident going on right now. There are several other incidents in the area that are of this magnitude, so resources have been really premium for us.”

He encouraged them to stay informed by keeping up with the current news, keep up with the updates provided by Cal Fire and the city of Gilroy. Residents should also make plans should an evacuation become necessary if they live on the east side of the city. They should also keep a defensible space around homes and property.

“I know that together, we can make our community a little bit safer and support the efforts of firefighters as we continue through this very, very challenging time,” Velasco said. 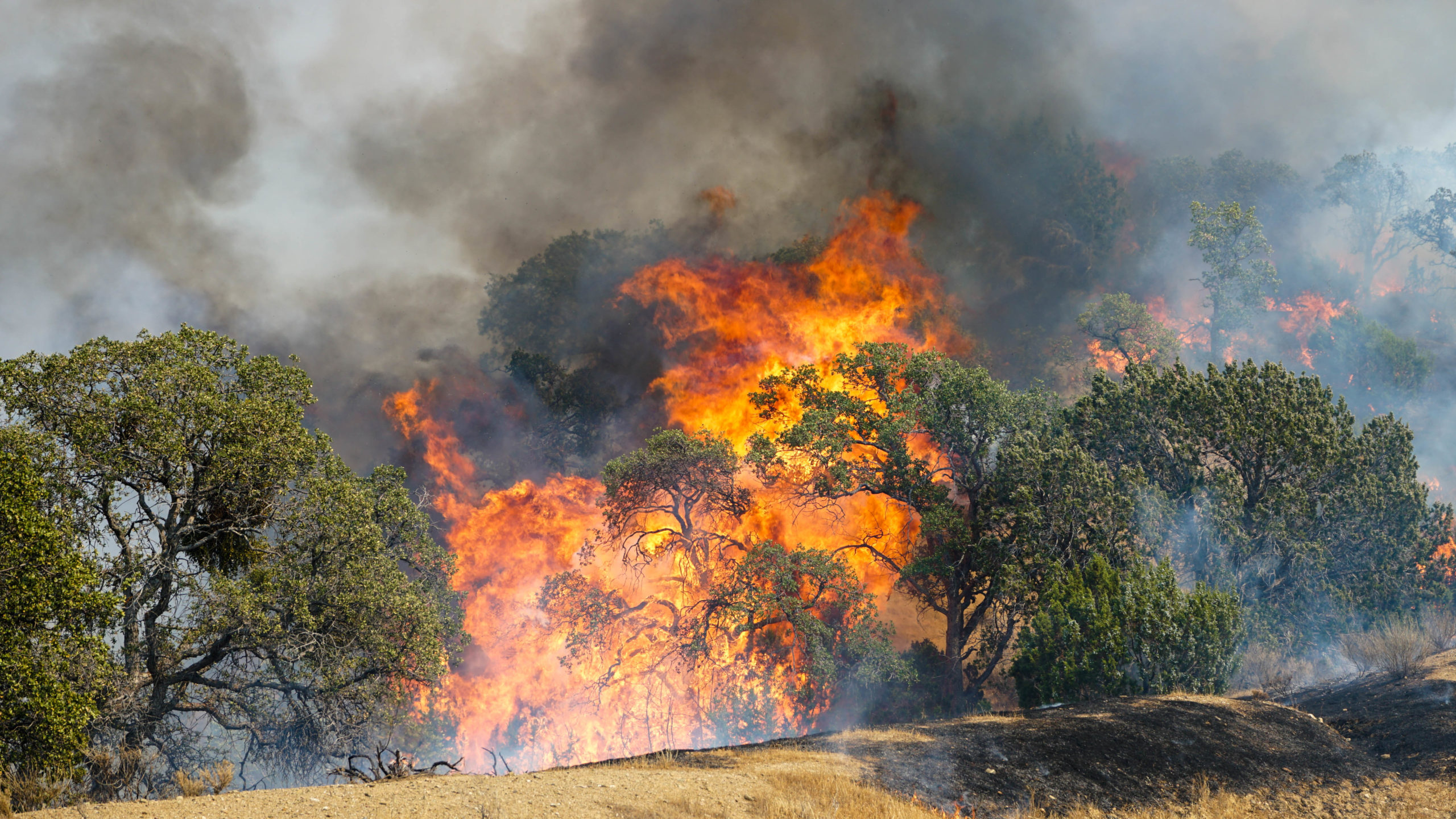 The back burn in San Joaquin County successfully reduces fuel ahead of the fire.
Photo courtesy California Conservation Corps

“It goes without saying that these are some very trying times and the smoothness of how these emergencies are be-ing handled is really a testimony to our teamwork and also to our teammates,” he said during the virtual meeting.

He also praised Morgan Hill police for making sure residents in the neighborhoods off East Dunne were evacuated in as smooth a manner as possible.

The evacuation was a precaution because the two-lane East Dunne Avenue is the only way to enter or exit the Hol-iday Estates, Jackson Oaks and Thomas Grade Road neighborhoods, said Morgan Hill City Manager Christina Turner.

Gilroy City Administrator Jimmy Forbis also emphasized during the virtual call that residents need to learn from Morgan Hill’s experience to take evacuations seriously and prepare to leave home in an orderly manner once the warning has been given. 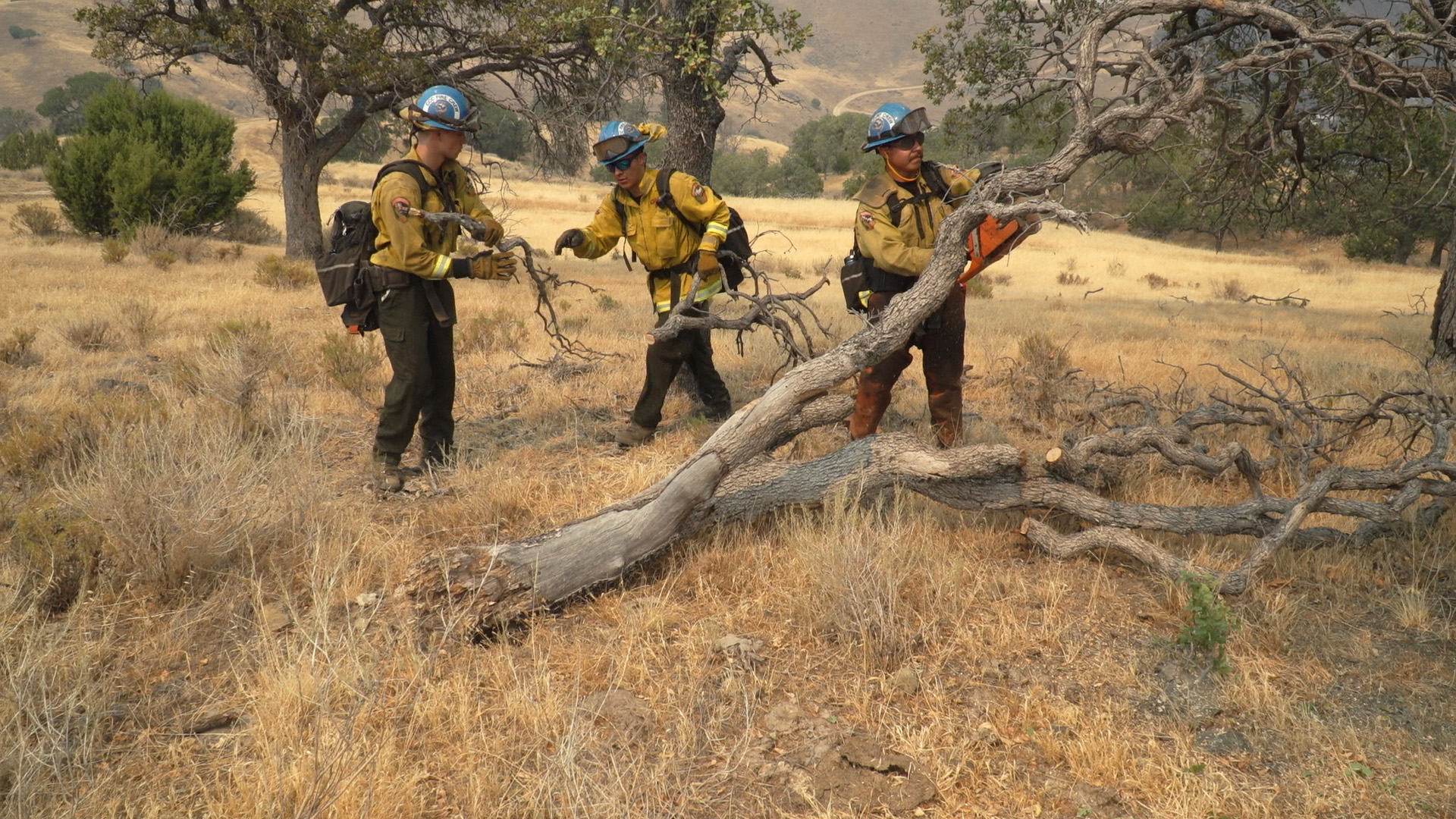 “We can learn a lot by paying attention because that could be us at any given time,” he said. “Although we have not had an evacuation order, things change very quickly where we live. Change of the wind, change of the weath-er, or something happens, so please pay attention to the region in general and never assume that you are complete-ly safe, especially at this time by the nature of what we are dealing with.”

Gilroy and Morgan Hill residents can sign up online for email updates to receive the latest information or follow the news on social media from the city or Cal Fire. They can also sign up for the Santa Clara County Emergency Management Department’s AlertSCC system to receive emergency messages by text, cell phone, landline, or email.

Morgan Hill Police Chief Shane Palsgrove thanked the community for listening to the warnings and evacuation alerts and being prepared to take action once the call was given on Sunday afternoon.

The 36-officer department has increased its number of nighttime patrol officers from five to 18 to make sure indi-viduals do not loot or vandalize empty homes. Checkpoints along East Dunne have been set up to make sure the people who were going there lived there by checking IDs.

Communication with the community was vital to the success of the evacuation to make sure there were no car ac-cidents or anyone left behind, he said.

“I couldn’t be more proud of our officers,” Palsgrove said. “They went out of their way and removed packages that were in plain site from the roadways and hid them in places for the owners to get them when they get back.”