The San Martin Airport played a vital role in helping contain the SCU Complex Lightning Fire that burned nearly 400,000 acres across the Diablo Range for three weeks starting in mid-August. The aviation site provided Cal Fire with a base for its helicopter battalion to refuel and load water or fire retardant chemicals.

Using the South Valley’s only public airport to fight the third largest wildfire in California history proved its worth as an essential resource in managing emergency situations. And members of the nonprofit group CalDART (Disaster Airlift Response Team) hope that the region’s residents understand how vital the 179-acre airport can be if human life is endangered by future emergency events such as earthquakes, floods and more wildfires.

“It’s a huge asset for our community having the airport so close. It’s right here,” said Denean Richards, a member of CalDART.

Among benefits are Angel Flights where private pilots provide free air transportation for passengers in need of medical treatment far from home and perform other missions of community service. Richards’ husband is one Angel Flight volunteer who on occasion flies ill people from the South Valley out of the San Martin Airport. Often these are patients whose immune systems are compromised. Their lives would be at risk if they went to a busy passenger airport to fly for their medical needs.

“These are things that are really of a huge benefit to the quality of life in our communities, not to mention the preservation of our community in an emergency,” Richards said. 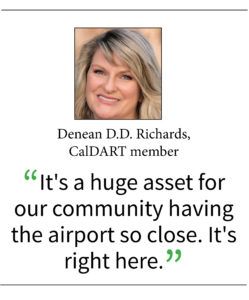 CalDART got its start about 12 years ago when a group of private pilots with airplanes based at San Martin Airport developed an ongoing conversation around the idea of being better organized to deal with emergency situations. The county airport had been used during the Loma Prieta Earthquake aftermath in October 1989. The sudden need to transport food and water to the region had been a bit “disorganized” in the chaos of that crisis. But it also proved the value of the airport during a large-scale emergency, said Paul Marshall, the president of CalDART.

“Out of that conversation, we had the idea that we should have some kind of group to serve the community when we need it,” he said. “It took us about three years after that to develop the DARP (Disaster Airlift Response Plan) and put the local SCAPA (South County Airport Pilots Association) DART team together at the airport.”

With the COVID-19 pandemic, CalDART has also been involved with its pilots flying equipment such as 5,000 face masks and 19,000 face shields to areas that need these personal protective equipment. One mission flew five ventilators to Tijuana, Mexico, to help people with the coronavirus recover.

With San Martin Airport as the original site of the program, a network of CalDART operators has grown based at seven airports throughout the state. The other teams are located at Watsonville, Half Moon Bay, Reid-Hillview in San Jose, North Bay, Torrance, and Santa Monica airports. Four more DART operators are expected to join the network in October.

The CalDART program is a wholly-owned subsidiary of the California Pilot Association. Its mission is to provide logistical options for impacted communities, helping emergency managers, organizations, and citizens who are trying to move people or supplies into or out of a disaster zone. Many of its volunteer pilots find their involvement provides them with a way to engage in their love of flying while they help improve California’s disaster resilience.

“We’re one of the many volunteer organizations around the nation that help out in times of disaster,” Marshall said.

During an emergency event such as a major earthquake, SCAPA DART will work with the Santa Clara County, Morgan Hill, and Gilroy Emergency Operation Centers, which will coordinate its events with other volunteer organizations such as the American Red Cross, the Salvation Army, and local Community Emergency Response Teams members in the South Valley region. If necessary, the Federal Emergency Management Agency will also help out.

FEMA has created scenarios for a huge earthquake hitting the Bay Area during the next several decades on either the San Andreas or Calaveras faults. The Loma Prieta Earthquake was a magnitude 6.9 tremor that killed 63 people, injured 3,757, and caused $6 billion ($12.4 billion today) in devastation throughout the Bay Area when it struck at 5:04 p.m. Oct. 17, 1989. The federal agency projected that if a 7.9 magnitude quake hit near the Golden Gate Bridge, it would cause a far worse devastation and death and injury toll. Freeway overpasses would collapse and roads would be difficult to traverse. Bay Area airports would be essential transportation hubs during the first weeks to save lives.

“The question is, how do we get our first responders in?” Marshall said. “How do we evacuate people who are fragile out of the area, maybe senior citizens who can’t live in their homes?  . . . There are a whole lot of preservation of life transportation issues that the airports can accomplish when the freeways are down.” 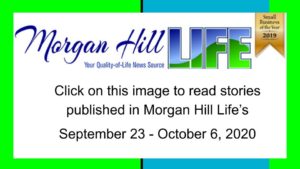 Despite the benefits, there are some in the county who don’t want the airports near their homes. The 180-acre Reid-Hillview Airport was built in the early 1940s in east San Jose when the area was farmland. Over the decades, homes were built around the airport. Today, residents have expressed concerns about having light planes continuously landing and taking off over these neighborhoods. The county’s third general aviation airport is located in Palo Alto and covers 102 acres.

Preliminary discussions by the county’s officials and the South Valley pilot community have considered expanding San Martin Airport’s asphalt runways beyond their current 3,100 feet, per the county’s South County Airport Master Plan Report. This would allow bigger planes to use it, such as the airtankers used to fight wildfires. To battle the recent SCU Lightning Complex Fires, these airtankers carried as much as 1,200 gallons of water or retardant chemicals. They flew out of the Hollister Airport, which has a runway that is 6,350-feet long to provide more length for a safe takeoff with a heavy load.

Some nearby San Martin residents have been resistant to the South Valley’s airport lengthening its runways.

“There have been talks from certain groups that don’t want growth and don’t want anything to change in South County,” Richards said. “It’s not like it’s going to be turned into SFO or anything. But we need this airport, especially if Reid-Hillview closes. This is absolutely essential for South County.”

The SCU fire can show elected officials as well as the South Valley community the need to expand the San Martin Airport’s runways to better serve the public’s safety, Marshall said.

“We’re thinking it’s a good idea to expand the runway, and we’re bringing up the topic now with our county administration and supervisors,” he said. “As an example, with the (SCU) fire, our tankers can take off from Hollister, but they can’t take off from San Martin because it’s too small. If we build a bigger runway, the tankers won’t have as far to fly. But it’s not just firefighting. The expanded airport would be of more use to the community.”