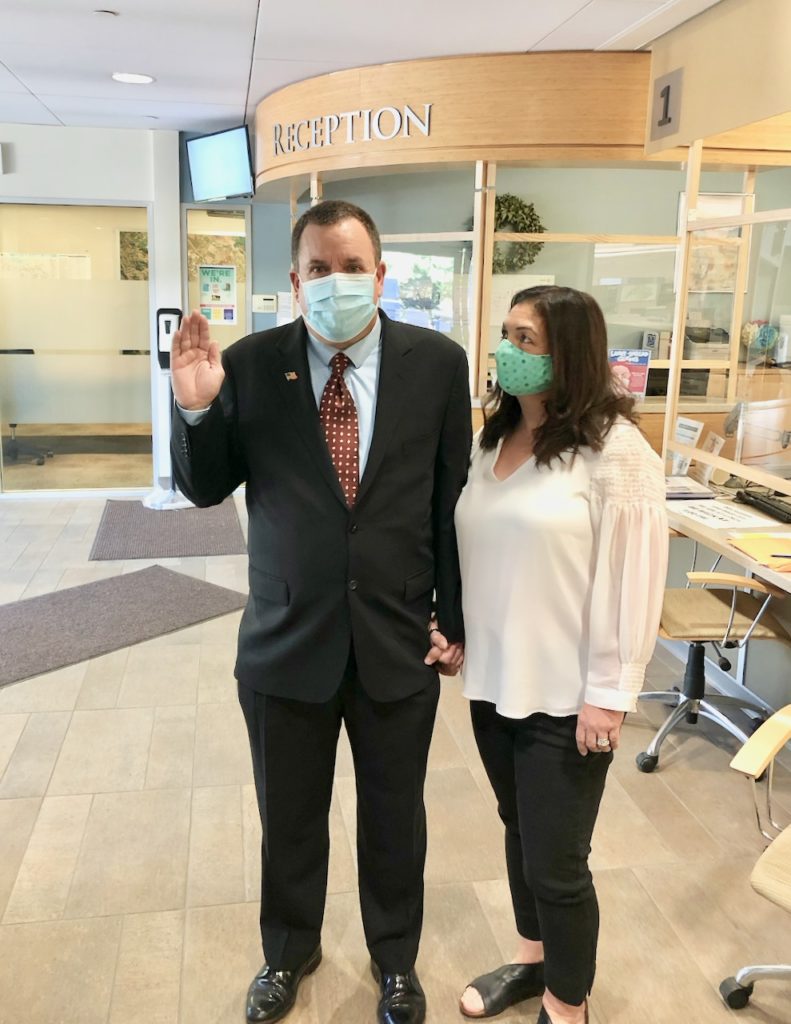 With his wife, Marina, standing beside him, Chappell is sworn in as he presented his nomination to the city clerk.

Morgan Hill has a surprise last-minute competitor for the top spot on the city council in the November 3 election. Longtime resident Steve Chappell, 58, met the qualifications to be a write-in candidate for mayor, going against incumbent Rich Constantine.

The technology consultant has grown a reputation among certain segments of the community for his activities on online social media questioning the city’s governance over the years. He submitted a petition with the signatures of 30 registered voters to the Santa Clara County Registrar of Voters, which notified him Oct. 19 he could campaign as a write-in candidate. Because only Constantine’s name is on the ballot, voters will have to pen Chappell’s name on a blank area in that section of the ballot.

“I’ve had a lot of residents ask me to Run for Mayor, and also a lot of questions about my position,” he wrote in a Facebook post.

He wrote that he has a record as a civically-minded resident, attending council meetings for more than 20 years and speaking as a petitioner for local issues.

“I’ve also worked on Recreational Land Use issues at the County, State and Federal level as an OHV enthusiast,” he said. “I’ve also raised concerns and participated in Open Space within the City and worked with other residents to preserve that.

His Facebook post describes his three reasons he decided to enter the race a candidate for mayor:

If elected to the mayor seat, here are goals Chappell wrote on Facebook that he hopes to  achieve:

Chappell describes himself as a “true conservative thinker” who wants less government in people’s lives.

“I believe in democracy of the people, in that ‘we are the custodians of our own governance’ and not outside influences,” he said in his Facebook post. “And last, I believe we need to reign in out of control government, apply simpler yet smarter methods of managing our city and using best practices always to achieve good sound results in the end. And that means making tough decisions for the betterment of all and to preserve what we love about our City.”