Dolores Gutierrez was born in Westmoreland, California, during the Great Depression to Pilar Cota and Eleuterio Lopez and grew up in Delano, California, with four sisters and five brothers. 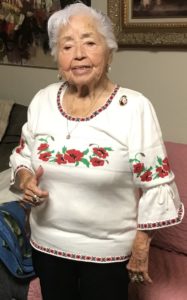 She studied and worked in the fields to help out, but dreamed of being a nurse in the service. Hopeful to make her way, she married Rafael Gutiérrez, and settled in San Jose, California. They had a daughter and five sons, including twins.

Life wasn’t easy but Dolores was a survivor. The war created opportunities, and inspired by Rosie the Riveter she found work in the canneries. She was a loving mother, wife, sister, grandmother, daughter, and friend. Her tiny 4-foot, 9-inch stature was soft like a pillow and packed with the strength of a warrior, making her our rock.

Later she remarried Raul Flores and moved to Morgan Hill. Her favorite things in life were family, children, dancing, singing mariachi songs, joking and “paseando y tomando una vueltecita,” exploring and going for a ride. She is deeply loved and her healing tortillas, chile verde and tamales, beautiful laugh and fun will be forever missed and irreplaceable.

A private Celebration of Life will be held 11 a.m. Nov. 14 at San Juan Bautista Mission.