You promised to unite all Americans. As you step into the job of Commander in Chief Jan 20, you will no doubt find that healing a nation so deeply divided is a daunting task during a dangerous time of uncertainty for our republic’s future. The recent violent storming and looting of the U.S. Capitol serves as one more of many warnings that our experiment in governance of the people, by the people and for the people now lies in peril. We are seeing a steady decline in the state of our democracy.

Our heritage of popular sovereignty might soon end if we allow the insanity and incivility in American politics to grow worse and thus give autocrats the opportunity to come into positions of power. 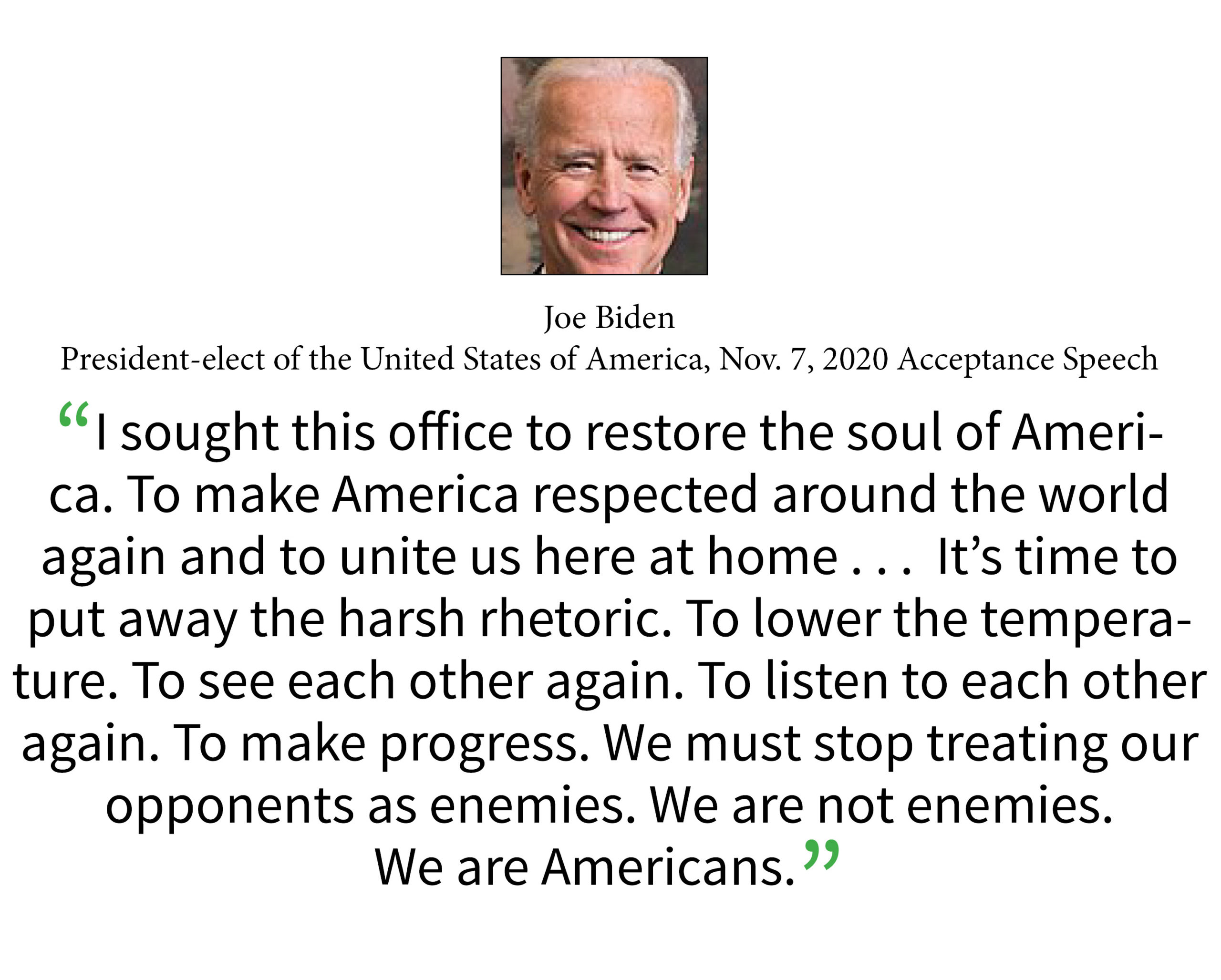 No doubt Americans have daunting challenges. Fortunately, we also have a possible cure to this cancer of divisiveness. My hope, Mr. Biden, is that you will find in your heart the courage to support an endeavor to mend our republic by providing hope for humanity. The Vision-2020 movement can empower Americans to stop fighting and start uniting. What Vision-2020 gives the United States is an audacious project that holds the power to join people of opposing ideologies. We’ve seen this happen before half a century ago during a similar turbulent time. The Apollo 11 lunar landing on July 20, 1969, united humanity for one brief shining moment.

To unite all Americans now requires leadership that invites all people to achieve an even greater goal than the one President John F. Kennedy set us on in an adventure to the Moon. Mr. Biden, in your Inauguration Day speech, I encourage you to ask all Americans and all humanity to join you in supporting the Vision-2020 movement. Encourage your fellow Americans to leave a lasting legacy of a better tomorrow for all. Imagine if we — if all people of every ideology — come together as one people in an ambitious but achievable undertaking. Vision-2020 sets us on the path to give our children and grandchildren the greatest gift of all: a world forever free of wars achieved by Christmas Day 2040.

For thousands of years humans have hoped for an end to the violence and injustice, the death and destruction that arises when nations go to war. With Vision-2020 we now have an opportunity using media technology and other innovations to achieve the dream of world peace in the next 20 years. This audacious goal won’t come easy. It is, however, an absolute necessity if we human beings wish to survive beyond the 21st century. 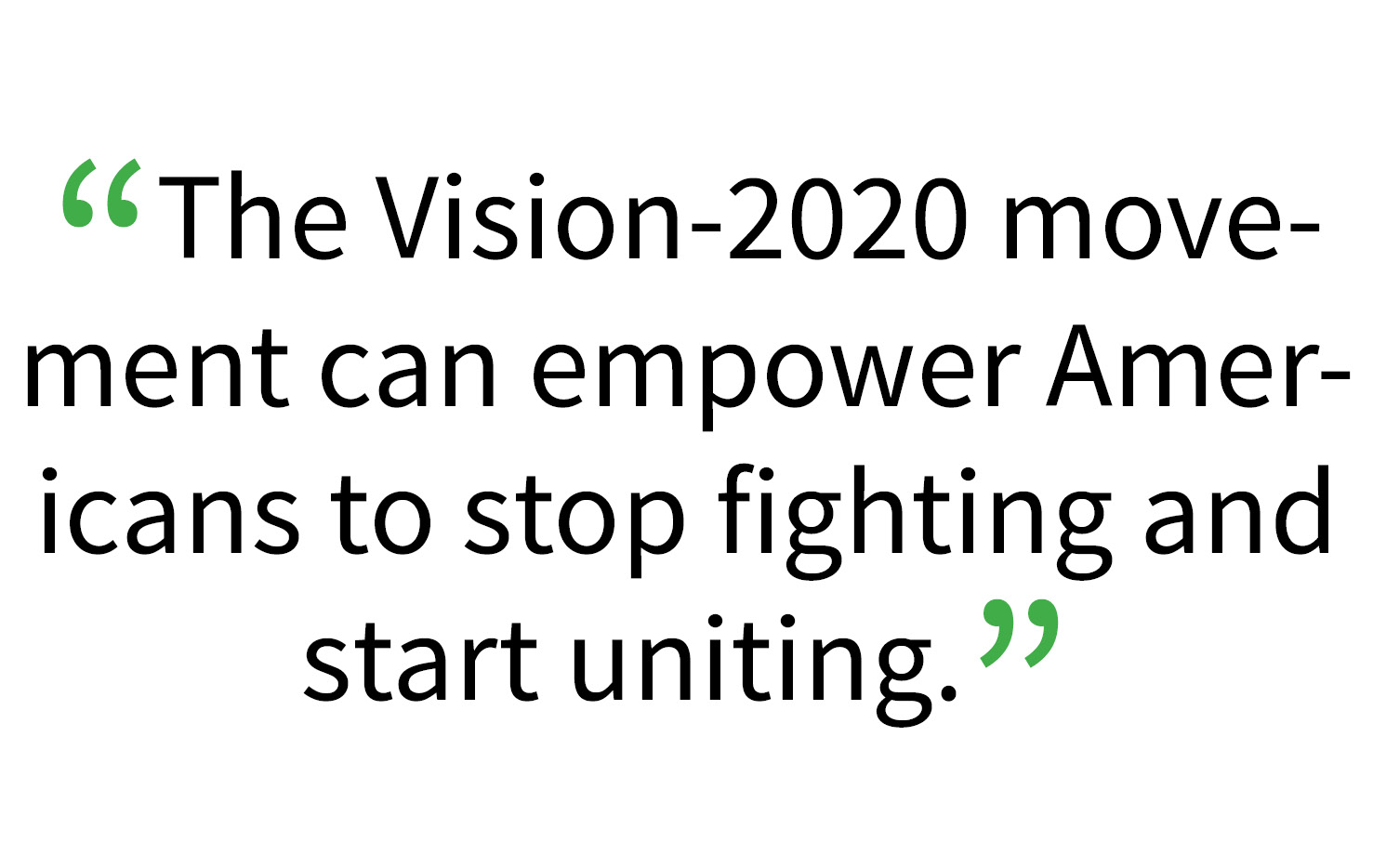 Vision-2020 is a moral movement. The pursuit of global peace is a goal supported by all faiths as a matter of human rights. The Vision-2020 movement is also a matter of national security. We face a significant threat in the next three decades. America and China will, if the political experts are correct, find themselves in a major conflict against each other by the mid-century. If we have lost our democracy, this conflict will most likely explode into a global war. The Chinese-American War will be a war no one can win. If nuclear armaments are used, it could potentially end civilization.

Let’s avoid the Chinese-American War by striving to end all wars. Maybe it might take a miracle. President-elect Biden, you will have the influence as our nation’s prime leader to empower Americans to achieve that miracle. I ask you as well all our other leaders — especially those elected to represent us in Congress — to support the Vision-2020 movement and encourage all people on our planet to join together to travel along a path to peace.

Let us learn from the leadership of President Kennedy who warned, “Mankind must bring an end to war, or war will bring an end to mankind.” The world went to the brink of nuclear Armageddon during the dark days of the Cuban Missile Crisis. We must heed history’s warning and in the process heal our nation by bringing back civility and sanity to our government.

Mr. Biden, do the right thing. Keep your promise. Unite every American. Unite every man, woman and child who loves our country, and encourage them to be a hero for humanity and support the goal of Vision-2020. Encourage all other American leaders — Republicans and Democrats and independents — to strive to create together a lasting legacy for the human race. Let us Americans lead the way to give the greatest gift to our children and generations to follow by Christmas Day in the year 2040: a true and permanent peace among all nations.