Anita worked with her husband in the flower fields until Vincenzo passed in 1972. 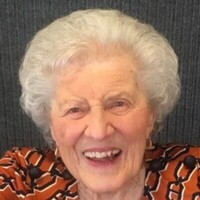 Anita will be deeply missed by her family and friends. She was a loving, strong, funny, and wise woman. She was in constant motion finding multiple activities to keep her occupied and productive.

Anita was born in Sere, a small town near Genoa, Italy, to Victorio and Maria Traverso. At the age of two her parents immigrated to the North Beach area of San Francisco. There she went to school and learned to speak English. She later attended Beauty College and became a beautician. She married at the age of 19 to the late Vincenzo Vanni, a flower grower in Colma. They were the proud parents of three children. In 1948 the family moved to Mountain View and continued growing cut flowers, with Anita now being an integral part of the family enterprise.

Anita worked with her husband in the flower fields until Vincenzo passed in 1972. Later she met and married Andy L. Zanardi, until his passing in 2019. Anita continued to work in the nursery with her two sons until her retirement in 1997 when she moved to Gilroy.

Anita continued to live in her home with the help of a wonderful caregiver, Cynthia Flores. She is survived by her three children:  Alice Bautista (Donald) from Cupertino, David Vanni (Valerie) and Donald Vanni (Sharon) both from Gilroy; also 14 grandchildren, 30 great-grandchildren and two great-great-grandchildren.

She was a proud member of St. Mary’s Parish in Gilroy and the Italian Catholic Federation. Never losing the connection to her homeland, she spent many summers touring Italy. One of the highlights of her life was spending time with family and friends. She attributed her longevity to keeping busy and drinking good wine. Anita will be profoundly missed and forever remembered by her infectious smile and laughter, her good nature, her generosity and the love for her family. Services were private due to COVID-19.

Guest Column
This guest column represents the views of the writer and not necessarily that of Morgan Hill Life. If you're interested in writing a guest column for this newspaper, please email the editor at [email protected]fe.com.
Latest posts by Guest Column (see all)