Latino Leaders . . . by Vanessa Soto: Music is a big part of Gavilan teacher’s life, but flamenco is his passion

While living in Spain, Albert Marqués studied under one of the  world’s best flamenco players 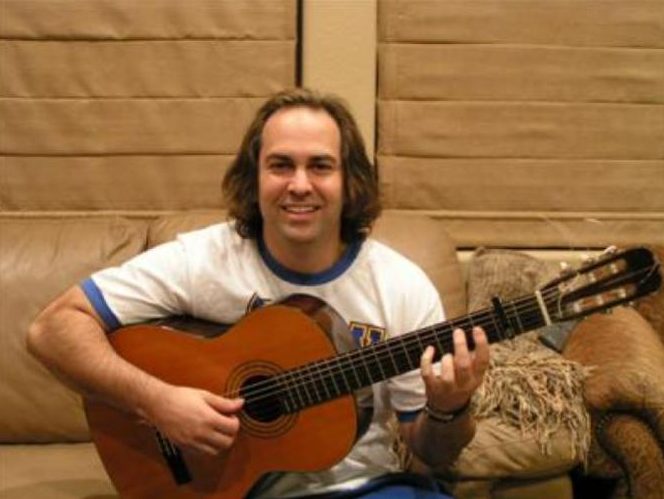 His passion has been passed down from generation to generation. The Gavilan College Spanish instructor carries the heritage in playing this vibrant style of guitar music since childhood.

Marqués performs flamenco throughout California. He also shares his talent in the South Valley at concerts at the Gavilan Theater and other venues.

“I play a flamenco guitar and I also play the electric guitar. But flamenco is kind of like a specialized genre of music,” he said. “People around here, in Gilroy and Morgan Hill, they love it for, like, 10 to 15 minutes — and then they’ve had enough. So, most of the gigs I do are outside (South Valley).”

Last year Marqués played at a prestigious concert at the Center for Performing Arts in San Jose.

“We shared the stage with a bunch of people. It was a sold-out event and that was fun.”

Marqués also performs at fundraisers. For example, he played last year at several concerts to raise money for the victims of the 2019 Gilroy Garlic Festival shooting.

Marqués was born in Mountain View in 1967 to Larry and Martha Marqués. His family moved to the city of Santa Clara and lived there until he was about seven, the age when he received his first guitar. His grandparents had moved to Gilroy and his parents followed. He attended El Roble Elementary School, then Saint Mary School from sixth through eighth grade. Following that, he studied at Palma High School, a Catholic private school in Salinas. After graduation, he spent two years as a Gavilan student.

“I played in bands the whole time,” Marqués said of his formative years. “I met Sam Sotelo who teaches music at Gavilan. We started a band, a really cool band.”

In 1988, Marqués and his family moved to Spain. He began his studies of the Spanish language for foreigners program at the University of Barcelona. Experiencing the culture inspired him to appreciate the land of his father’s heritage.

“Although my dad is Spanish and my mom is from Mexico, my Spanish was really bad,” Marqués admitted.

While in Barcelona he studied with Juan Gorjón, one of Spain’s best flamenco players. Marqués’s passion for the guitar inspired him to practice eight to 12 hours a day.

As an aspiring player, he was also inspired by his father who had enjoyed a career as a flamenco musician who had performed on the “American Bandstand” TV show and also had signed contracts with major record companies.

“He always told me if music does not work out you should have a backup plan,” Marqués said.

When he returned to the U.S., he decided to become a Spanish language teacher. He enrolled at California State University, Fresno for his master’s degree in linguistics and continued playing, winning several major guitar competitions. One day he noticed his pinkie finger on his left hand felt numb. A doctor told him he had nerve damage. The news devastated him.

For about six to eight years Marqués did not play the guitar. One day, Chris Herrera, a former Gavilan student, asked him to teach him how to play. Marques realized his hand did not hurt and he started playing guitar again.

Marqués helps organize and performs in the annual Bach to Blues music concert featuring Gavilan faculty. It serves as a fundraiser for the music department. This year will be a May 7 streaming event because of COVID-19.

“It’s a very unique event where he showcases various forms of music from blues to jazz,” said Eddie Diaz, the artistic director for the Flamenco Society in San Jose. “He usually covers the flamenco part. He performs solo, sometimes performing with his father or other flamenco guitarists or artists.”

A fellow Spanish instructor at Gavilan, David Perez said he and Marques are co-partners in everything they do. In 2010 Gavilan cancelled the Fenix Language Institute program Perez ran to take students to study abroad in Mexico. A new program started by the two men took students to Seville, Spain. Marqués and Perez encourage students to study abroad to develop their appreciation for the Spanish and Mexican cultures.

During the COVID-19 crisis, Marqués continues studying to improve. He has been taking lessons from a master guitarist in Spain online for the past six months.

“I have a lot of new material. My goals are to get out there and share it,” he said. “I have a lot of concerts lined up as soon as we can get through COVID.”  He also sees a music album in his near future.

“I’ve been saying that for 20 years, but I think it is finally time,” he said.