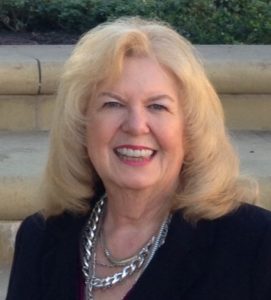 This month, the Morgan Hill Downtown Association  is proud to feature Marilyn Librers, our newest board member. Already a blazing beacon in our town, having lived here for 45 years, Librers has a long history of outstanding service to the community. She served as a city councilwoman for eight years, and six years as a parks and recreation commissioner. After retiring from politics, she took a year off to see where her interests lay, and luckily for MHDA, concluded that it was the perfect fit for her.

“Back then, downtown was the only place to shop. There was no freeway then, and both San Jose and Gilroy were a long drive away,” she said.

She represented the city council and the chamber of commerce during the early 2000s, and the Morgan Hill Property Based Improvement District effort, comprised of downtown merchants who contributed regularly for the beautification and improvement of downtown.

Librers says that people need to be aware of every aspect of our wonderful downtown.

“Everyone knows our restaurants, and now it’s time for them to know our retail too.”

While serving, she would like to promote more of the retail shops downtown and even “entice people to open shops downtown, now that the pandemic is nearing its end, hopefully, and people are more comfortable getting out in public” she added.

Librers has always worked for nonprofits, and is passionate about working hard and giving back, simultaneously. She is a retired Mt. Madonna YMCA employee, which she opened in 1989 as their first employee, and helped design the Centennial Recreation Center. She is the erstwhile Executive Director of the Pauchon Research Foundation — an organization that grants money globally for scientific research for the betterment of mankind.

Currently, Librers is the president of China-Silicon Valley Association, a nonprofit organization based in Palo Alto.

Additionally, she is part of a lecture tour (on hold for a year) and traveled to China 37 times, giving lectures all across the country in the past five years. She speaks a little Mandarin, has friends all over China, with whom she stays connected.

MHDA and CLEF are the two boards she is on and she is passionate about both.

Librers has two grown children and one grandchild. Both kids are Live Oak graduates. Morgan Hill is her hometown, and she has many relatives here. She has no plans to leave or move and would like to spend the rest of her life here and help Morgan Hill become a great town.

“It is already great but we shouldn’t forget what needs to be done still, and that is important to me,” she concluded.