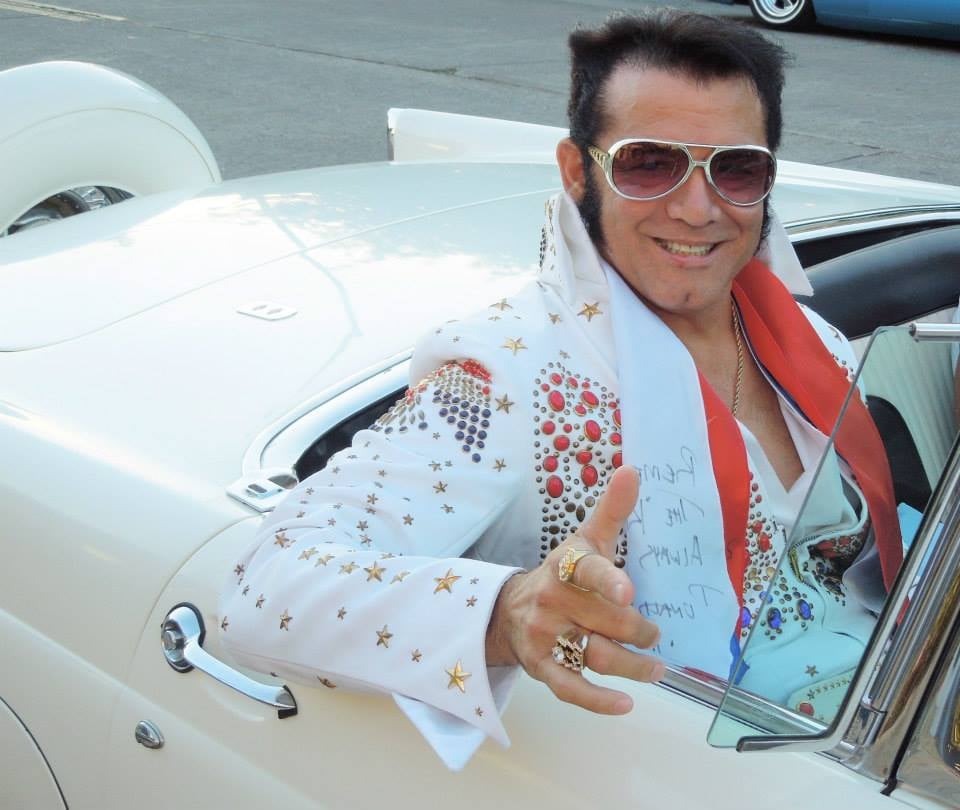 Donald Prieto died May 1. He was well-known in the community as an Elvis impersonator.

Donald Prieto had a passion for Presley. He spent countless concert hours entertaining audiences as Elvis. The tribute artist loved the thrill of giving a curl of the lip and a sly wink of the eye as he belted out many of the beloved songs the King of Rock ‘n’ Roll was famous for. 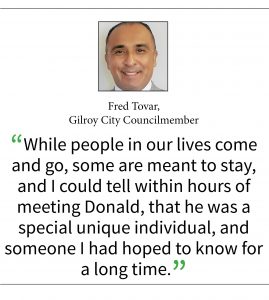 Raven-maned and tailored in a 1970s-style Elvis sequin jumpsuit, the Gilroyan was well known in the South Valley for helping local nonprofits raise funds through concerts and other events during the past three decades. He was born Feb. 16, 1967 and died May 1, age 54.

Prieto got his start as the man from Memphis in 1992. The next year, he competed in a contest to see who might be the best Elvis Presley tribute artist. He came in second. At one point, as his music career bloomed he was doing 15 to 20 shows on weekends. Before a show he sat in his car and listened to Elvis music to get in the mood

“I do it because I love what I do. I put that suit on and it changes my persona,” he said in a Gilroy Life story published last year. “I’ve had my best friends tell me that when I put that suit on I become Elvis. I really don’t notice it.”

The Poppy Jasper International Film Festival presented the longtime Gilroy resident with its 2020 Community Achievement Award July 9. Organizers originally intended to give him the honor at the festival in April in 2020, but the COVID-19 pandemic cancelled the event.

Instead, they showed him their love at a special gathering of family and friends in the parking lot outside Victoria’s Mexican Restaurant, which is owned by the Prieto family and where he frequently performed as Elvis on Thursday nights to entertain customers.

Gilroy Mayor Marie Blankley said Prieto was a friend who brought a lot of joy to everyone he knew.

“Their family restaurant, Victoria’s, has been a staple in Gilroy for decades,” she said. “Donald found in Elvis a role with which he brought magic everywhere he went, a break from the present and life’s struggles, and a genuine love for living. He was a man of great faith, and he will be dearly missed.”

Gilroy City Councilmember Fred Tovar was also a close friend of Prieto. Tovar was new to Gilroy when they first met. Prieto instantly made him feel comfortable, almost as if they had known each other forever.

“While people in our lives come and go, some are meant to stay, and I could tell this within hours of meeting Donald, that he was a special unique individual, and someone I had hoped to know for a long time,” he said. “Not only was he a good man, he made me want to be a better person, as he brought so much joy, laughter, love, support, and peace to all our  lives.”

Mattie Scariot, the director of the Poppy Jasper International Film festival, has been friends with Prieto since they first met at Gilroy High School as young students. Even back then, she saw how Prieto was developing his charisma and outgoing personality.

A diabetic since childhood, Prieto had health issues for many years and had a kidney replacement about 12 years ago. In 2020, he needed a new kidney and was on a waiting list. The doctors recently told him he was not well enough to go through surgery for another kidney. He faced the remaining days of his life bravely, Scariot said.

“Donald was this bright light. You just never caught him having a bad day,” she said. “He was always happy, always had a kind word. I think that’s why when he was on stage, he just glowed. To be able to capture an audience like he did is a gift. And that came from something inside of him.”

In his tribute concerts to “the King,” Prieto would engage with the audience, flirting with the women and joking with the men.

“He had this love for Elvis, but he also had this love for people, and he used Elvis to connect everyone together,” Scariot said. “He gave so much of himself on stage. You could see the audience react to that. I always loved watching him perform.”

Prieto’s last eight months were spent in the company of his girlfriend, Diane Todd. They met through social media.

He sent a message on Facebook  asking her in a joking way: “Why are you single? Do you not take showers? Are your kids crazy?” His gentle teasing sense of humor interested her in him and they started dating.

Because he couldn’t do concerts because of the pandemic, Prieto sang to Todd personally in his home — songs such as “Feels So Right” by Alabama and “Cross My Heart” by George Strait.

“He had a gorgeous voice and a gorgeous heart. Those are memories I will take with me forever.”

Prieto even became friends with her grandchildren, including 5-year-old Blaise who first met him at Victoria’s and was impressed with the restaurant’s tortilla chips enough to make him a special plaque proclaiming how delicious they tasted.

“Donald will be in my heart forever and I’m so proud to be in his heart when he left us,” Todd said. “I’m so happy that I was able to give him love and received his love before he passed away.”

Prieto leaves behind his daughter Presley, his sister Vikki, his mother Linda and many other family members.

A memorial service for Donald Prieto was held May 15 at Gilroy’s New Hope Church.