For nearly two decades, local children have enjoyed the spirit of the game 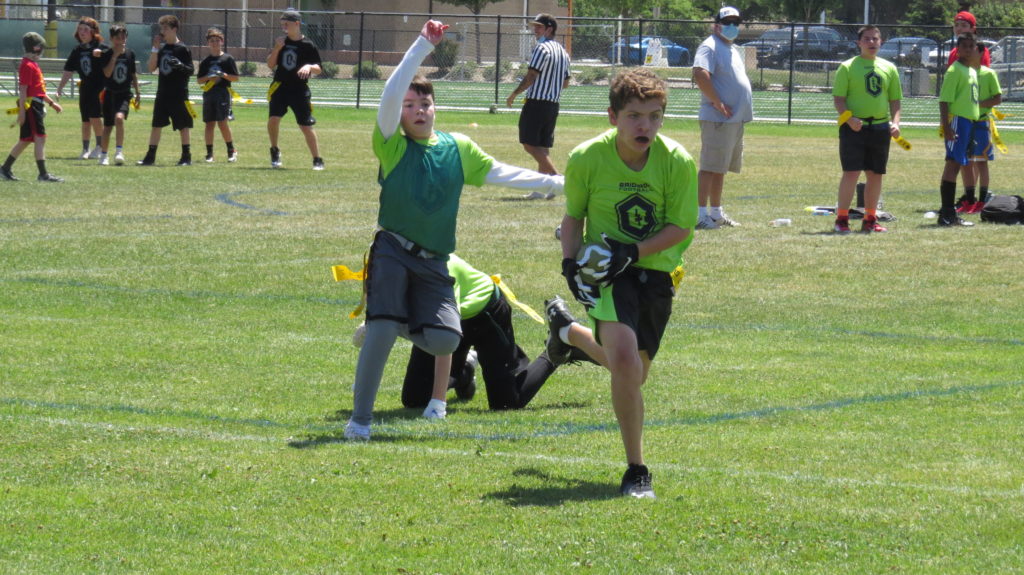 Photo by Marty Cheek
Youngsters play a game at the Outdoor Sports Center as part of the South Valley Flag Football League.

As the mid-day sun blazed down on the green turf of the Morgan Hill Outdoor Sports Center, young boys and girls and teens put in their mouth guards, attached their flags to waists and engaged in competitive games of the South Valley Flag Football League. Families and friends cheered out encouragement as the ball soared through the air during one game. A referee’s whistle shrieked to stop a play.

For many families, flag football games in the South Valley are a weekend tradition. Young people who competed nearly two decades ago have grown up to see their own children in the uniform of various teams including the 49ers, Cowboys, Packers and Raiders. On many afternoons, the fields are busy with young people competing in the league’s summer season.

A euphoric man of 63 with a neatly trimmed beard, Jeff Dixon sat in a reclining chair under a pop-up canopy by the entrance gate. The founder of the league watched the activity on the fields and greeted parents and players with a jovial persona. He strolled along the fields talking to the families and friends of the fierce competitors who were dueling it out for the glory of taking home a first-place medal.

For 17 years Dixon has run flag football in South County. The joy he and all the participants get out of the games is what drives him to continue doing it over all the years.

“That’s fun every year!” the jubilant Morgan Hill man said about his passion for the league.

The pace of the game and the military-like strategy behind every decision made by the coaches and players are just two reasons he loves the game of football so much. While the league is filled with fun for the children and the families, a healthy balance in the competition remains a core principle the league holds in spirit, he said.

Although it’s important for the youth players to compete against one another as hard as they can, for Dixon it’s even more vital that they learn how to win and lose respectfully.

“You don’t need to beat him and then talk bad to him. And if you get beat, don’t let him do it again,” he encourages players. “Win like you’ve been there before. Win with courtesy.”

The South Valley Flag Football League teamed up with a nationwide company called Gridiron Football in January to help in operations of the flag football tournaments. Gridiron Football offers various formats of game play for boys and girls ages five to 17. They teach kids the game of football, help them get active in the tournaments, and create friendships.

While this league helps teach the fundamentals, there’s so much more Dixon hopes kids and families take away from their experience. The benefits are different for every child, he said. And it’s up to the coaches and volunteers to help the children figure out how they can become better as people and players.

One thing that is universal, however, is how children must deal with adversity, cope with defeat, and figure out how to beat their opponent the next time they play, Dixon said.

Ella Pearson, an elementary school-age Gilroy resident who has three brothers, loves to compete against all the guys she plays against.

“They think boys are tougher, but they’re not,” she said.

When her teammates are not doing what they’re supposed to do during a game, she makes sure they get to the right place. She loves playing because she gets a lot of pleasure from the intense exercise that comes from the game.

One of the reasons that Ella is playing is because of the fun but also semi-competitive nature of the league, said her mother, Katie Pearson.

Girls have always been encouraged to play in the league, Dixon said. He always makes sure the two genders are treated equally and fairly and receive an opportunity to play in games. He recalled that at an award ceremony in one of the league’s first seasons, a young girl asked him if there was a cheerleading program to join.

“I told her, ‘I don’t want you to cheer the boys on, I want you to go out on the field and beat them,’” Dixon said.

An all-girls league is a goal Dixon intends to achieve with Gridiron Football in the coming years. He hopes 2022 is the year this new league can be launched. While the specifics are not yet decided, it could include teams traveling around the Bay Area to play one another, he suggested. Getting this league from an idea to a reality continues to remain an important aim for Dixon.

The Morgan Hill area has grown into a successful sports tourism area. This is partly due to the work Dixon did as the former president of the Morgan Hill Youth Sports Alliance. He attended conventions across the country to help bring more sporting events to the center and grow awareness of South Valley as an athletics region. That work has paid off as there are soccer tournaments and flag football games held nearly every weekend and the sports center is now home to some of the biggest events such as the Fourth of July fireworks celebration and concerts like the Boots & Brews country music festival.

Ultimately, the one thing that leaves Dixon feeling the most joyful is seeing all the families leaving with smiles on their faces whether they won or not.

Serving the greater community is vital to Dixon’s philosophy of life. Everyone will find a way to make their mark on society, he said. For some that may be food banks, health services, or tutoring homeless kids, which he did in the ‘90s. Today, one of the ways he serves is by providing a place for kids to play the game that he loves so much.

“It’s all about the kids,” Dixon said. “If you can help them see their way and find their path and realize their potential, you’re actually building the future.”

In a year that has been so hard for everyone, the football league offers a chance for kids and families to move forward and do something familiar again, he said. This enables parents to go out and cheer their sons and daughters on again and enjoy the normalcy the games provide.

During a championship game June 6, one player jumped like a rocket and snagged the ball out of the air for a touchdown while his team was down by four points. The crowd erupted and the 10-year-old boy got a standing ovation. Moments like that, Dixon said, offers everyone a sense of normalcy.

The league can function because of the many volunteers who take time out of their schedules to officiate, coach, and assist behind the scenes, he said.

“I couldn’t do it without them,” he said, expressing his gratitude that they listen to him and follow his requests.

As of now, Dixon said he’d love to see the league’s organizing team increase in number as it is mainly only him doing jobs such as getting uniforms and flags for all the players. That growth is even more important now with the hopes of establishing eight locations in San Jose plus the Morgan Hill location, which is dear to Dixon’s heart.

“Look, I’m not going to be here forever,” he said. “I would love to see that, no matter what it’s called, this league and this activity is available to the children of South Valley for decades.”