The Santa Clara County Board of Supervisors voted unanimously Aug. 31 on a resolution declaring they have lost confidence in Sheriff Laurie Smith for her management of the Sheriff Department. They cited a number of reasons including mistreatment of prisoners by deputies and various ethical violations associated with her 2018 political campaign. 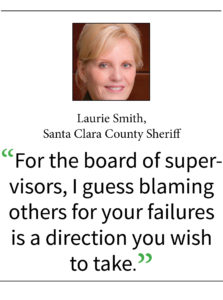 A long list of leaders throughout the county have criticized Smith, among them San Jose Mayor Sam Liccardo who called for the sheriff’s resignation at a Aug. 16 press briefing. He based this on allegations of poor jail management, a lack of transparency and accountability in the department, as well as several bribery and corruption scandals.

Supervisors Joe Simitian and Susan Ellenberg wrote the resolution and made it public Aug. 17. It noted the jail abuse and millions of dollars the county has had to pay in neglect settlements as well as a series of criminal indictments that have ensnared several of the sheriff’s associates and her political supporters.

“We find ourselves left with one regrettable conclusion. We no longer have confidence that Sheriff Laurie Smith is able to faithfully, effectively and ethically perform the duties of sheriff,” read a memo by Simitian and Ellenberg to introduce the seven-page resolution. 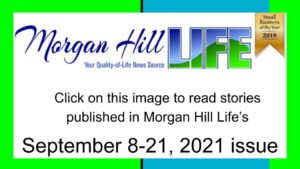 At the online Aug. 31 board meeting, Smith accused the board of not supporting her in the management of the department. In two 10-minute sessions where she provided her defense, she repeatedly emphasized the board’s inability to build a psychiatric hospital, instead of a new jail, to give mentally ill people treatment instead of forcing their “criminalization” in jail.

“For the board of supervisors, I guess blaming others for your failures is a direction you wish to take. It must be tough to find a person to blame instead of looking in the mirror at yourself,” Smith said. “You are ignoring the systematic issues of the best places and treatment for those in crisis. You are the only entity that can make a difference.”

In his comments at the meeting, Simitian criticized Smith for focusing almost exclusively on the issue of mental illness and ignoring many other ethical violations listed in the resolution. Among them was the August 2020 indictment of then-Capt. James Jensen by a criminal grand jury on felony bribery and conspiracy charges related to an alleged conspiracy to offer  $90,000 in donations supporting Sheriff Smith’s reelection in exchange for licenses to carry a concealed weapon.

“I’m disappointed and frankly offended by the fact that folks with such great need would be used in this way in an effort to conflate and confuse the issue, in an effort to divert and deflect and deny responsibility,” Simitian said.

The board at the Aug. 17 meeting voted unanimously to ask the U.S. Justice Department, California Attorney General Rob Bonta, the county’s civil grand jury and its own county counsel to investigate Smith, the Sheriff Department and the county jail for possible violations.

Smith said she welcomes the investigation, which is expected to take three to four years.

“We have no word yet on when those investigations will be initiated or how they will proceed,” said Supervisor Mike Wasserman who represents the South Valley.