MH churches feed hungry during holidays and throughout the year 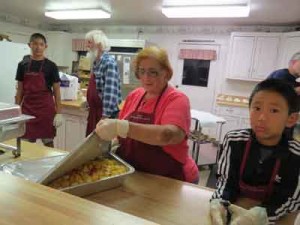 The clock ticks toward six at the United Methodist Church, the white clapboard house of worship in downtown Morgan Hill. The side door opens and from the dark and cold of the Wednesday evening streams a continuous trickle of guests — men, women and children — coming into the warmth of the meeting hall.

They come as welcomed guests for a weekly hot meal and socializing.

As a man plays a lively version of “The Tennessee Waltz” on the upright piano in the meeting hall lined with tables and chairs, a few of the guests get up and dance. Others nibble bowls of popcorn appetizers. In the kitchen, a team of volunteers prepare the chicken enchilada casserole, bread rolls, cauliflower and fruit salad. A teenage boy pours lemonade and passes Styrofoam cups to eager hands.

The church’s Sharing the Bounty program started three years ago when a man named Brad Grembam was looking for a way to give back to the Morgan Hill community that had reached out to him in his time of need, said Emma Harris. The Methodist Church member serves as the coordinator for the weekly meal. Not only is free food served but people make new friends and get ideas on how they can receive the necessary services they need to survive, she said. They also receive donated clothing as well as bags of bread they can take home. No one is ever turned away.

“We serve on an average about 60 people a week,” Harris said. “We have served so far this year 2,489 people and 4,737 meals. Being head of the program, I have been able to not only give back but to help those that we serve to know that if I can make it they can also. I share my story with those that I serve.”

After she started organizing the meals in January, for the first two months Harris wanted to quit because of the challenges of ensuring there was enough food every week for guests. Many church members stood beside her and prayed for her on a daily bases, helping her overcome her doubt that she could do it, she said.

“There have been many challenges and a lot of rewards both personally and spiritually,” she said. “Last year we raised $3,200 from our silent auction at the Taste of Morgan Hill. That gave us a good start for this year. But with our numbers increasing every week there is always a need.” 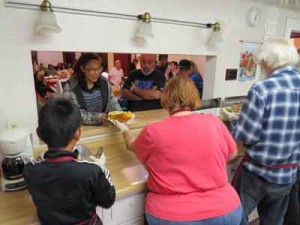 Martha’s Kitchen helps provide the hot meals for Share the Bounty and other programs in Morgan Hill, she said. The San Jose-based nonprofit also helps recipients get in touch with social services. The first house of worship to start the free meal program was Advent Lutheran Church nearly a decade ago, said Advent’s Pastor Anita Warner. In late 2005, church member Brian Cunningham did a study on how many people in Morgan Hill were hungry on any given day. Hundreds if not more might be hungry in our community each day he found.

“Advent Lutheran has long supported the Reach Out food pantry, and we were also keenly aware that there was nowhere in our city that a person could go for a free hot meal,” Warner said.

The Lutheran congregation decided to start the Community Table program, with member Ellie Quayle providing leadership. She took a food safety course, put together weekly teams and served the first meal the Tuesday after Easter in 2006.

“Beginning this right after Easter was significant for us — the renewal of sharing the joy of the gospel in tangible ways with our neighbors,” Warner said. “One hot meal a week was something, but we were eager to encourage more faith communities to offer their own versions of this hot meal ministry to cover more days of the week.”

For five years Advent Lutheran was the only church in town offering the hot meals. During the past five years, other Morgan Hill churches also became involved in offering meals on other days through Martha’s Kitchen.

“We probably couldn’t sustain this without having the prepared food provided for us, so it is a perfect partnership in that way,” Warner said.
Advent Lutheran member Marianne Glover coordinates the meals. Beyond nutrition needs, people who come to Community Table find the warmth of friends to share a meal with, she said.

“The social aspect is really important so they have someone who may be on the same page as them and understands and doesn’t judge them,” she said. “Some of these people don’t know where they will get their next meal and knowing that we can help is a great feeling.”

“We were looking for a way our teens could put into practice what Jesus taught about a leader being someone who serves,” he said. “We found out three other churches in town already served meals every week. We asked the hosts of the dinners at those churches if we could help them, but they all said they had enough volunteers. So we decided to try doing it ourselves.”

At first, groups of teens hosted the dinners once a month. The program evolved as the word got out for volunteers to help. More than 100 people signed up, forming seven teams of 11 people each. The church’s meal program gets drop-in helpers too.

“I can tell you that I myself enjoy the camaraderie at the dinners,” Lillig said. “I cannot stay home on Monday nights. I have to go to the dinner because I cannot sit at home knowing my friends are enjoying dinner and each other’s company over at church. The food is obviously very important. But we all need friends and other people to hang out with — and we all seem to seek that out more during the holidays.”