First two programs in the series have been well attended 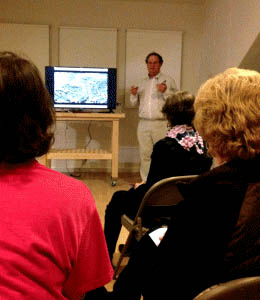 Photo by Kathy Sullivan/Special to MH Life
Ed Brown discusses why residents should conduct a personal history of their family during a Thursday night talk at the museum.

The Morgan Hill Historical Society has a mission to preserve the past for the future good of our community. And this year it started a special “History at the House” series of guest speakers who talk about the region’s history.

These conversations are held at 10 a.m. the third Saturday of the month. They are viderecorded to ensure they are preserved for generations to come. In the past two months Ed Brown, owner of the Forget It Not in Morgan Hill, has been involved in using his video-audio expertise to preserve the stories and comments by speakers such as former Morgan Hill Mayor Beth Wyman as well as Kim Moreno, an expert on nationally-known naturalist Charles Kellogg who lived in Morgan Hill about a century ago.

Historical society board member Mike Monroe, a local businessman, came up with the idea for the series, which he describes as “good conversations about local history.” The first speaker chosen for the series was Wyman because she is a longtime historian for Morgan Hill, he said.

“The inspiration for the conversation comes from the fact that we do have a lot of people in our area who have long histories,” he said. “So we decided that instead of doing one presentation at the Founders’ Day Dinner, which is an annual event for the historical society, we decided it would be smart to make sure we have the opportunity to interview other people, especially those who are up in years, and record their stories. So that’s the reason we decided to put the video part together.”

Wyman talked about the Save the El Toro movement and controlled growth of the 1970s, he said. “That’s a hot topic for us right now, and Beth was in the forefront trying to put some sort of smart growth plan into place at the city level,” he said.

Moreno shared his enthusiasm for Charles Kellogg who was a vaudeville entertainer who educated people about wildlife and started a movement to save the redwood trees of California. He lived in a home at the east end of Tennant Avenue on the Fountain Oaks estate of Kodak film heiress Gertrude Achilles, now owned by the Chiala family.

“Kim really focused on the commonality that (he and Gertrude) shared,” he said. “One of the things they had in common was they belonged to the Christian Science religion so there was a connection there. Where the Community Playhouse is now, that building was a Christian Science church.”

The next series conversation will be held 10 a.m. Saturday March 26 and feature Connie Rogers, the president of the Gilroy Historical Society.
Brown has done a good job videorecording and editing the History at the House talks despite the limitations of the venue, Monroe said.

“The Morgan Hill House is always a challenge for sound and for lighting, and also, if the speaker moves around a lot, it’s hard,” he said. “But we thought it was important to record them. They have long histories that we want to keep as a public record.”

Brown plans to put the talks on YouTube to serve as a historical society account that can be accessed by anyone in the world or in the coming decades.

“The technology is so amazing that someone 10 or 15 years from now might ask, ‘Who is Beth Wyman?’ And they get a flavor from the video of who she was and how she impacted the city,” Monroe said. “People who have a long history can relate only so much in an hour or an hour an a half.”

At the March 19 conversation, Rogers will provide a unique perspective of how Morgan Hill and Gilroy’s histories are linked in many aspects both socially and politically, Monroe said.

“She is a former council person for the city of Gilroy. We do share some common concerns about development projects and land use issue of the day,” he said. “It’s kind of a fun thing to see what Morgan Hill and Gilroy have in common. There’s always that friendly rivalry.”

The first two programs in the series have been well attended, Monroe said. With Beth Wyman, the historical society had a completely full house and Moreno also brought many people who wanted to hear him talk about Kellogg.

The History at the House series are not the only public presentations of local history given by the historical society. On March 12, the historical society will also welcome the Amah Mutsun tribal band to Villa Mira Monte for a special film presentation about some of their work with traditional tribal land. Tribal leaders Val Lopez and Ed Ketchem, as well as people from the Santa Clara Valley Open Space Authority, will answer questions after the 20-minute film on the land areas that are significant to their history.

“The historical society is building bridges to get people to visit and learn more about their local history,” Monroe said. “My personal interest is that we think there is a great community value to preserving the local history and passing on the local history. So if there are opportunities for either guest speakers or in the case of Native Americans to bring different perspectives to the community, it’s something really important that the community treasures in all aspects. I’m really convinced we’re providing a valuable service that we hope other people will find enjoyable but also treasure down the road with the videos.”

Kathy Sullivan, president of the historical society, agrees that the new History at the House series is helping build the nonprofit organization’s brand in telling the story of Morgan Hill and its people.

“It’s important for us to provide more of a background on our city and our community,” she said. “These History at the House conversations allow us to do that with people who have expertise on certain areas. Those people are interested in sharing their knowledge and want to be interviewed. And we are recording them so that we have access to them in the future and that way people can add to the conversations as we collect them to preserve the stories.”

If someone has a suggestion for a History at the House speaker, they can email Monroe at [email protected]

What: History at the House
When: 10 a.m. the third Saturday of each month
Where: Villa Mira Monte House, 17860 Monterey Road