Years in the making, OSA’s Coyote Ridge will be permanently preserved 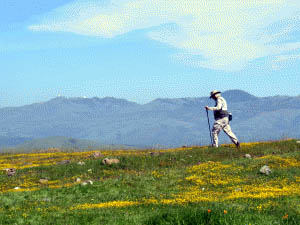 Photo by Marty Cheek
A lone hiker enjoys the tranquil area known as Coyote Ridge in the eastern foothills of Coyote Valley.

Checker-spot butterflies darted over carpets of yellow and purple wildflowers spread across the serpentine grasslands as more than 100 people met at a special ceremony for the acquisition of the Coyote Ridge Preserve property by the Santa Clara Valley Open Space Authority.

“Today we celebrate the transition from Cold War to conservation,” said Andrea Mackenzie, general manager of the OSA to the audience gathered at the Friday March 18 event. “In another time and era, around the time I was born about 55 years ago, this beautiful ridge was acquired by the United Technologies Corporation as a buffer zone for the testing of Tomahawk and Minute Man missiles and NASA spacecraft in the valley just below us. Many of you grew up in the Santa Clara Valley and you remember hearing those booming noises. UTC, part of Pratt & Whitney, started operations here starting in 1959 and going to 2004.”

The 1,831 acres of ridge land on the east foothills of Coyote Valley was permanently protected from development through a partnership of funders, local leaders and supporters, she said. The property will be made accessible to the public as an OSA preserve in the summer of 2018 after a staging site area is developed on Malech Road, near the Bailey Road and U.S. 101 interchange, about five miles north of Morgan Hill. Measure Q bond money will be used for its construction.

The property reaches an elevation of about 1,400 feet, providing vistas of the Diablo and Santa Cruz mountain ranges. In the furrows and folds of the hillsides, small streams and seeps support riparian plants and animals. Pristine rolling hills, heritage oaks and rock outcroppings accent the wilderness terrain. The Coyote Ridge property is home to Tule elk, bobcats, golden eagles, burrowing owls, and the endangered Bay checker-spot butterfly. The serpentine grasslands come to vibrant-colored life with spring wildflowers. 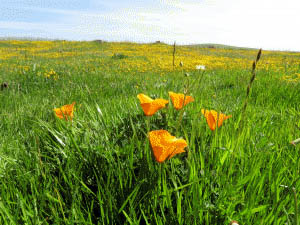 “It is one of the most significant wildlife habitat areas in the San Francisco Bay region and its preservation has been decades in the making,” Mackenzie told the crowd. “Many of you know that our Santa Clara Valley Greenprint identifies Coyote Ridge as one of the 10 most critical landscapes that was worthy of conservation in Santa Clara Valley. The Santa Clara Valley Habitat Plan ranked this as the top priority in that habitat plan because of the remaining serpentine grasslands and its role in spawning Bay checkered -spot butterflies.”

The land acquisition is the largest for the OSA date. The authority received a total of $8.6 million in funding for the acquisition from a broad public and private partnership that included the Wildlife Conservation Board, the U.S. Fish and Wildlife Service Section 6 land acquisition program to further Habitat Conservation Plans under the Endangered Species Act, the Gordon and Betty Moore Foundation, the State Coastal Conservancy, the Bureau of Reclamation Central Valley Project, and the State Parks Recreational Trails Program. The property’s fair market value is $15.6 million and UTC received a tax credit from its part in donating the land.

The newly acquired land is part of a larger complex of 130,000 acres of publicly and privately conserved land in the Diablo Range. Partners for preserving the land include the Santa Clara Valley Transportation Authority, which offset the impacts of highway projects in the area by purchasing 548 acres of critical Bay checker-spot butterfly habitat on Coyote Ridge. The Santa Clara Valley Water District and the Nature Conservancy were other partners involved in Coyote Ridge land acquisition.

“Essentially, we have over 3,000 acres of protected land up here that the public can enjoy,” Mackenzie said.

The OSA encourages Coyote Ridge as a place for education of the Bay Area youth to visit and learn how to be good stewards of the environment, she said.

“The legacy of this place will be about outdoor science and recreation,” she said. “This will be an outdoor laboratory where school groups can come and learn about the many, many plant species and animal species here. They can learn about climate change, what’s going to happen over time.”

Congresswoman Zoe Lofgren told the audience that she arrived in the Bay Area from Washington, D.C., late the night before.

“I can’t tell you how good it is to be here. Being here in this beautiful space reminds you about what really matters in the world,” she said. “It wasn’t always a given that we would have open space in this (Silicon) Valley.”

She reminded the audience that about 40 years ago it was an open question whether the Silicon Valley would have development in these hills. In the early 1980s she spoke to a housing developer who told her it would be “a piece of cake” to subdivide these hills, just like in Los Angeles where hills and valleys are covered with housing.

“Santa Clara County decided to take a different approach, that we… were not going to pave everything in sight,” she said. “We were going to have a valley where there would be some breathing space. And today, this afternoon, this is part of that breathing space to make sure we have nature preserved. This is worth preserving itself, but it’s also worth making sure every element of our community has an opportunity to come here and appreciate and breathe deep the solitude and the healthiness that is embodied by this protected area.”

She praised the voters and taxpayers of the Silicon Valley region for standing up for the preservation of natural lands by supporting the Open Space Authority.