By Nicholas Preciado and Marty Cheek 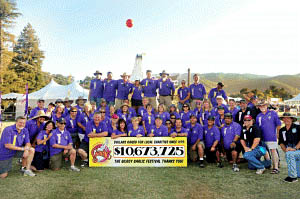 As this year’s board president of the Gilroy Garlic Festival Association, the nonprofit which puts on the world’s most famous culinary gathering, Dave Reynolds sees the annual event as key to bringing people together from throughout the South Valley. For him personally, volunteering time and energy to put on the festival is a family affair.

Reynolds, a wealth manager at JPMorgan Chase Bank, moved to California from Boston 20 years ago and found himself helping out with the garlic festival due to his family’s involvement.

“My wife (Paula) and her family were involved in different committees,” he said. “I just naturally started volunteering as a member of the community.”

Reynolds’ three daughters, Isabelle,Abby, and Bridget, volunteer at the festival as well.

“That’s the way it operates,” he said. “Helping and working at the festival gets in your blood.”

This year marks the 38th annual Gilroy Garlic Festival, which takes place at Christmas Hill Park July 29-31. The event brings about 95,000 people to the South Valley. The members of the festival association works year-round to put on the event. The group is made up mostly of volunteers. 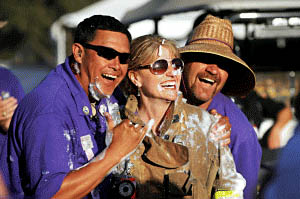 The festival and its association got its start in what might seem a banal manner in 1978 when Dr. Rudy Melone, then the president of Gavilan Community College, read in a newspaper story about a small town in France which annually hosted 80,000 people at its garlic soup festival. The town of Arleux even claimed the “Garlic Capital of the World” title. Melone sensed that Gilroy needed a similar event to build up community pride in its garlic industry and also raise money for charity causes. He approached a few friends at the Gilroy Rotary Club who told him it was a “crazy idea.”

“There would be no Gilroy Garlic Festival without Rudy” said festival co-founder Don Christopher, president of Christopher Ranch Garlic, in a press release. “Rudy was a wonderful, tenacious man. The event was his idea and he was the spark that made everything go. He loved Gilroy and because of his Italian heritage, he loved garlic. Putting the two together, he increased the popularity of Gilroy — and, likewise, garlic.”

Melone approached Christopher as well as his friend Val Filice to chat about putting on the Gilroy Garlic Festival. The trio decided to make it happen and in the summer of 1979 on farm land near Bloomfield Road, the first festival was launched. Organizers projected a first-year attendance of 5,000. They were shocked when 15,000 garlic lovers showed up. Admissions volunteers were forced to reuse tickets to accommodate the unexpected masses. Soon after that first year’s overwhelming success, organizers realized that there was a need to create the Gilroy Garlic Festival Association to put on the event every year. 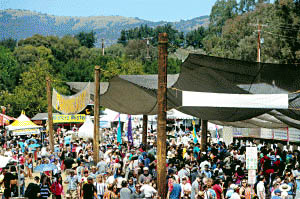 Nearly four decades later, the Gilroy Garlic Festival is regarded as “the preeminent food festival in America” and even has international fame, with more than 3 million people attending over the years. Each year, about 4,000 volunteers from about 125 nonprofits in Gilroy, San Martin, Morgan Hill and Hollister participate in putting it on. More than $10.6 million for worthy causes has been raised throughout the festival’s history.

“We raise the money, cover expenses, and then that pot of money goes to charity,” Reynolds said.

Over the years as it has grown, the festival association has made changes to serve its mission of raising money for charities. A somewhat controversial decision to charge for parking this year was made to help offset transportation costs for busing attendees because many acres of parking space was lost due to home development near Christmas Hill Park in recent years, Reynolds said. The association is expecting to spend $200,000 to $300,000 in shuttle expenses this year. 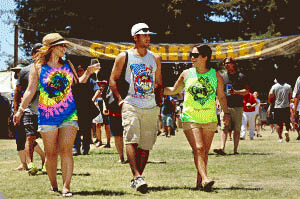 Participating nonprofits need to be local because of the demand for volunteers, with people coming from throughout the South Valley and San Benito County region.

“The marching band at Live Oak High School in Morgan Hill has contributed for many years,” Reynolds said, giving an example. “They do the whole process for mushrooms, and that’s staffed by hundreds of the marching band kids and their parents…. The labor is what makes it work. There’s this unique equity-share program with labor, so every volunteer hour worked is a wage per hour earned for that nonprofit’s charity.” 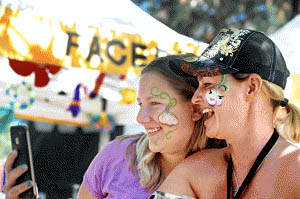 In addition to giving money to nonprofit groups, the association also gives money back to the community through sponsorships with local businesses.

“Historically, we’ve put aside that money to try to give back to the community, whether it’s planting trees or redoing the electrical, gas and plumbing at Christmas Hill Park,” Reynolds said. “We benefit, of course, because it makes putting on the festival easier, but the community uses that space as well.”

The festival association also gets substantial financial and in-kind support from the local community’s businesses and individuals to put the festival each year, Reynolds said.

“We have donations from local farms, from all over the place,” he said. “Not only do the individuals working help out, but the business community gives us a significant amount of help.”

“When you’re down at the festival, you’re pouring beer or you’re selling tickets, you see your family and friends coming through,” Turner said. “People who work these four-hour shifts, they have a great time, and they’re contributing not only to the mission of the chamber, but to the community at large. There’s a strong sense of pride in the agricultural community here, supplying so much of the county’s food and other locations.”