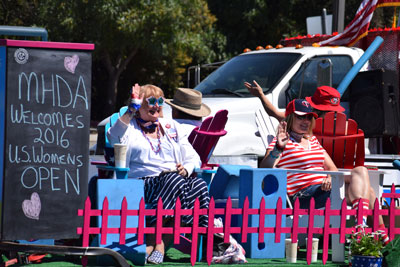 When it comes to celebrating America’s birthday, the South Valley truly knows how to show off its red, white and blue spirit.

July 3 and July 4, people come together in Morgan Hill to salute our nation’s heritage by enjoying live music, a fun 5K walk/run, a car show and a downtown parade that organizers say is in its 141st consecutive year.

The annual Freedom Fest celebration consists of six events culminating Independence Day in a spectacular fireworks display lighting up the night sky. According to Jeff Dixon, president of Independence Day Celebrations, Inc., the nonprofit that organizes the celebration, the events this year are expected to draw 80,000 to 100,000 people.

“The Freedom Fest is truly a community event despite the fact that many attendees are from other communities,” he said. “Members of our community come to celebrate America’s precious freedoms, to spend time with family and friends or just to attend one of the many events.”

The festivities kick off with the Patriotic Sing at 6 p.m. Tuesday, July 3, at the Community Cultural Center amphitheater. Celebrating its 29th year, the free outdoor concert at the Downtown Amphitheater brings together local children to perform songs in honor of America.

“It’s (important) to teach our children the meaning of July 4,” he said. “We sit down that day and tell them why we are a free nation. We celebrate the men and women who fight to keep this country free, those who paid the ultimate sacrifice and their families.”

Aside from the appreciation shared by attendees of the annual event, there’s plenty of fun to be had as well, including new performances at the Family Music Fest. Dal Poggetto revealed that a special guest singer is scheduled to open the show.

This past spring, Morgan Hill local Angeline Madriaga won an international contest presented by website and YouTube channel Working With Lemons, which sought a singer to perform “How Far I’ll Go” from Disney’s animated film “Moana.”

The YouTube video — which has been viewed more than 5.6 million times —– was filmed on location at the Polynesian Cultural Center on the island of Oahu.

Madriaga will open the Family Music Fest program at 7:20 p.m. at the main stage on Third Street, followed by the Recurrents — a Bay Area band known for classic, Latin and Southern rock, and Motown sounds.

As the evening and the music fade out, prepare for another full day of Freedom Fest celebrations beginning bright and early Wednesday, July 4.

Trophies await the fastest participants in the Freedom Run 5K and the kids one mile, which kick off the day’s events with registration beginning at 6:30 a.m. Runners and walkers will be cheered on along the Freedom Fest parade route, which will be lined with spectators awaiting the parade later in the day.

Following the Freedom Run, more than 100 vintage, collector and custom cars will cruise the parade route. The “America’s National Parks”-themed Cruise & Car Show will bring out vehicles that are rarely seen on the road today, including Packards, Studebakers, Edsels, Sunbeams and more. These classics will be on display at the Centennial Community Center until 2 p.m., when awards will be handed out.

Members of the host club, Valle Del Sur Antique Automobile Club of America, will also be on-hand to answer questions and talk about the classics.

The cornerstone of the events, the 141st annual Freedom Fest Parade, commences at 10 a.m.. Participants decorate entries and design costumes based on this year’s theme, “The Great American Road Trip,” or the annual Heritage theme, “Celebrating Our Country’s Independence and Freedoms.”

This year’s highly anticipated downtown parade is a tribute not only to Morgan Hill’s firefighters, but also to firefighters around the country. Parade chair Maureen Hunt said firefighters are always at the ready – whether dealing with last year’s fire in the Santa Cruz Mountains or recent winter flooding.

“It’s not just Morgan Hill firefighters, but (those) all across the U.S. firefighters who ensure our national parks, our homes and towns are protected from the devastation caused by fires, floods and other natural disasters,” Hunt said.
The ever-popular Fireworks on the Green rounds out the Independence Day festivities beginning at 6 p.m. at the Outdoor Sports Center.

The featured band scheduled to kick-start the event is a new addition this year. One Country, comprised of Bay Area locals, covers iconic country singers like George Straight, Chris Stapleton, Johnny Cash and others — with a touch of their own flavor.

An encore performance of the Patriotic Sing will follow at 7:30 p.m., then the Hackjammers hit the stage about 8:30 p.m. A Freedom Fest favorite, the quartet known for its mix of ’80 and ’90s dance music will entertain the crowd until the sun goes down.

Depending on the winds, the grand finale of the two-day Freedom Fest will begin around 9:30 p.m. when it’s dark enough for fireworks to light up the skies over Morgan Hill for all to see.

Volunteerism at its Finest

With an event as large as the Freedom Fest, people might forget that it’s run completely by volunteers — a proud fact for longtime volunteers like Dal Poggetto.

“Some 22 years ago I was asked to help out and fell in love with the camaraderie and never left,” he said. “It gives me great pleasure to give back and lead by example for the ones that will continue this wonderful tradition.”
President Dixon said although it’s difficult to get exact figures, he estimates this year’s festival will bring out between 500 and 600 volunteers during the two days of events.

“The parade probably has almost 400 volunteers when you think of registration and check-in, staging, announcers, drivers, cleanup crew, banner carriers, safety marshals along with … entry coordinators and parade chair,” he said. “And that’s just the parade!”

Tack on the additional volunteers involved in the Patriotic Sing, Family Music Fest, Freedom Run, Car Cruise and Fireworks on the Green, and the numbers continue to grow.

“It’s amazing that this organization is wholly dependent on the community businesses, residents and leadership to keep the tradition alive,” Dixon said. “With costs of more than $200,000 annually, the monetary and in-kind support is truly amazing.”

Dixon added that IDC is already searching for locals to help in the coming years.

“Many of our volunteers have tenures of 10 to 30 years,” he said. “This fine organization needs the next wave of volunteers. It’s not easy to keep this tradition going, but the great Freedom Fest team with support from the community keeps this incredible tradition alive.”