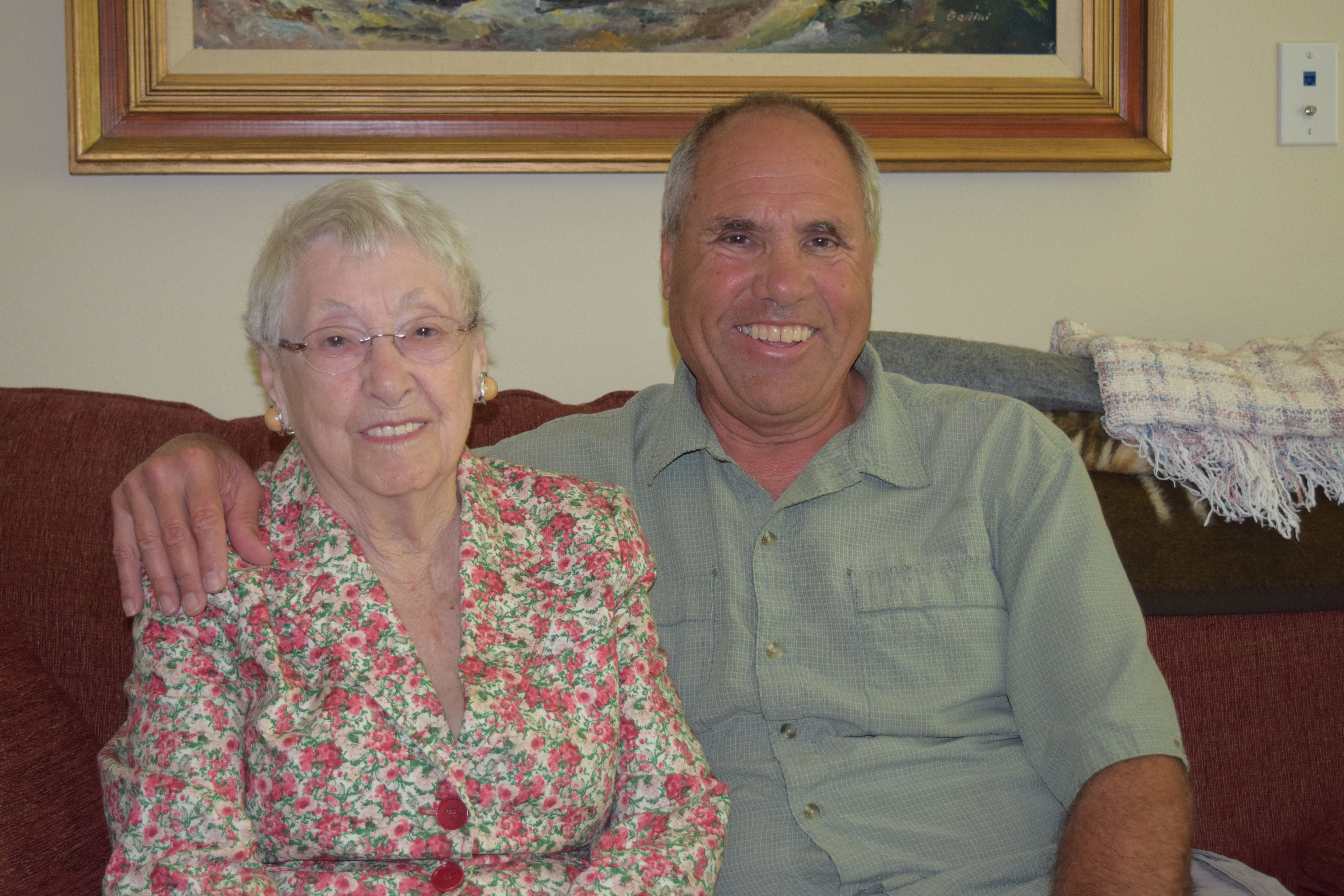 Photo by Robert Airoldi
Dolly Crandall, 98, and her son, Dan, relax on the couch of Dolly’s apartment at Westmont Living in Morgan Hill.

The slight, petite woman with an engaging smile is 98 and uses a walker to get around. She has a hard time hearing, but is otherwise healthy. She loves roller coasters, local festivals and the weekly glass of wine and a meal at Ladera Grill for happy hour Sunday afternoons with her son, Dan.

“It’s a friendly place and I like the food,” she said.

“She loves sitting at the bar,” Dan said. “Even though she has a hard time hearing she enjoys socializing.”

Born in 1919 to recently-immigrated parents from Sicily, she graduated from San Jose High School.

Her father was a shoemaker and worked at a packing company where the local women including Dolly’s mother would pack the fruit picked from Santa Clara County orchards.

Growing up in San Jose during the Depression, she never knew struggles. “As far as I knew, it was nice,” she said.
After graduating from high school, she worked as a secretary before marrying Edward Crandall in 1941. Her strict Sicilian parents weren’t too pleased with her choice, but eventually warmed up, she said with a smile.

Dolly stayed home, worked and raised the four children with the help of the couple’s parents.

She and Edward lived in the Willow Glen area of San Jose where Edward was a member of the Elks Club in San Jose and they socialized there a lot.

After the children all left, they sold their big house in which they raised their the children and moved into a nearby mobile home. But Dolly grew tired of the lack of space and they decided to move to west Morgan Hill.

Once here, she joined the Fabulous Flappers and Women in Touch. It was the dancing she really enjoyed.

“We were all friends and we danced in the Fourth of July parade,” she said. “It was a lot of fun.”

Edward died in 1998 at the age of 82. Dolly lived on her own for the next decade or so until her early 90s when one of her daughters came to live with her. Three years ago, she surrendered her driver’s license and moved into the Westmont Living facility in northeast Morgan Hill. While most of her needs are attended to, she likes the independence she has there.

“Everybody here is nice,” she said.

She has a small one-bedroom apartment with a kitchen she’s never used because residents can get a meal anytime. She also has a black cat named Cleo. “She keeps me company,” she said.

Dan, 63, a retired owner of an electronic/computer repair company he owned, visits regularly and takes her out on excursions. Dolly’s two daughters alternate visiting monthly. They visited Gilroy Gardens recently where Dolly rode the roller coaster.

Dolly enjoys the small town feel of Morgan Hill, the relative ease of getting around and the fun things to do in the area. She enjoys attending the Mushroom Mardi Gras and the Taste of Morgan Hill, two local annual festivals, and just being around people.

“Anytime she can get out she wants to get out,” Dan said. “It keeps her young.”