Those attending the free event discovered the gracious charm of the finely-crafted Queen Anne/East Lake Stick-style home built in 1884 by wealthy San Francisco socialites Diana and Hiram Morgan Hill, the man for whom the city is named. They also got a glimpse of how people lived locally a century and more ago at the Morgan Hill History Museum as well as strolling the Centennial Trail surrounded by a colorful aromatic rose garden.

Among the children who enjoyed the event was Morgan Hill resident Scarlett Lilleland, a four-year-old, who spent time learning from kids art teacher David Krase how to paint a picture of flowers and rainbows at a booth sponsored by GVA Cafe. Her mother, Amanda Yeam, beamed with pride watching as the girl printed her name on the bottom corner of the masterpiece. 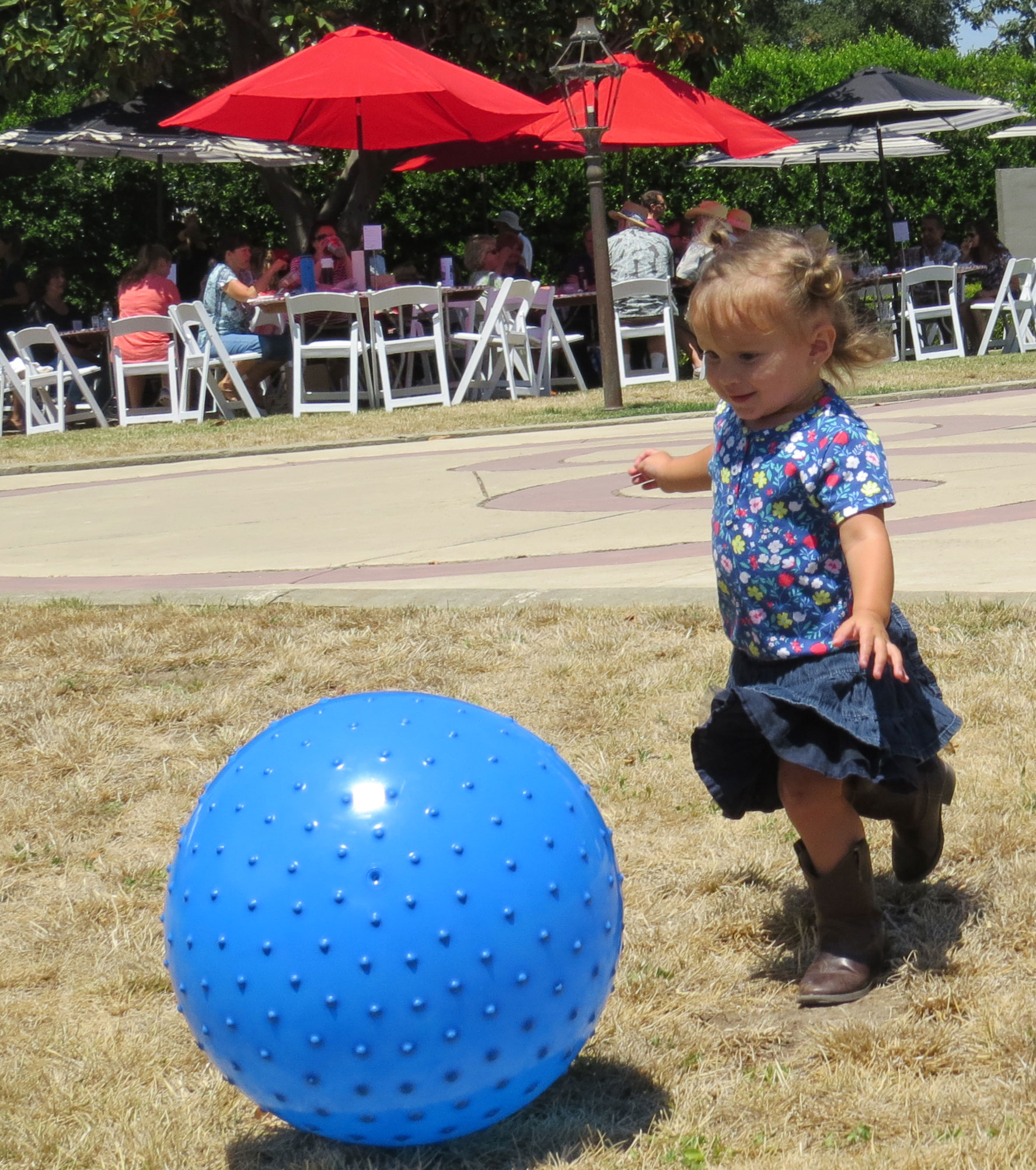 “We came to have a picnic,” Lilleland said.

Her mom was impressed by the friendly spirit of the fourth annual summertime event hosted by the Morgan Hill Historical Society.

“It’s really nice. It was right here,” she said. “We were just driving through downtown and saw the sign and thought why not come and check it out.”

Brian Bueno, 7, came to the community picnic with his parents, Ann and Alan, as well as his aunt Sharron Daniel. They enjoyed a lunch of sandwiches, fruit and veggies under a shady canopy.

“It’s fun, entertaining, good for kids,” he said. “There’s face painting, balloons, the petting zoo and all that.”

Villa Mira Monte has a lot of local history and the docents who give tours help visitors understand that life in the past was very different than it is now, he said.

“It could be fun for kids to discover the history of Morgan Hill,” he said. “They could say, oh, this is something-years old, like 20 years old — or maybe even 100 years old… There were no devices and all that stuff like phones, iPads.” 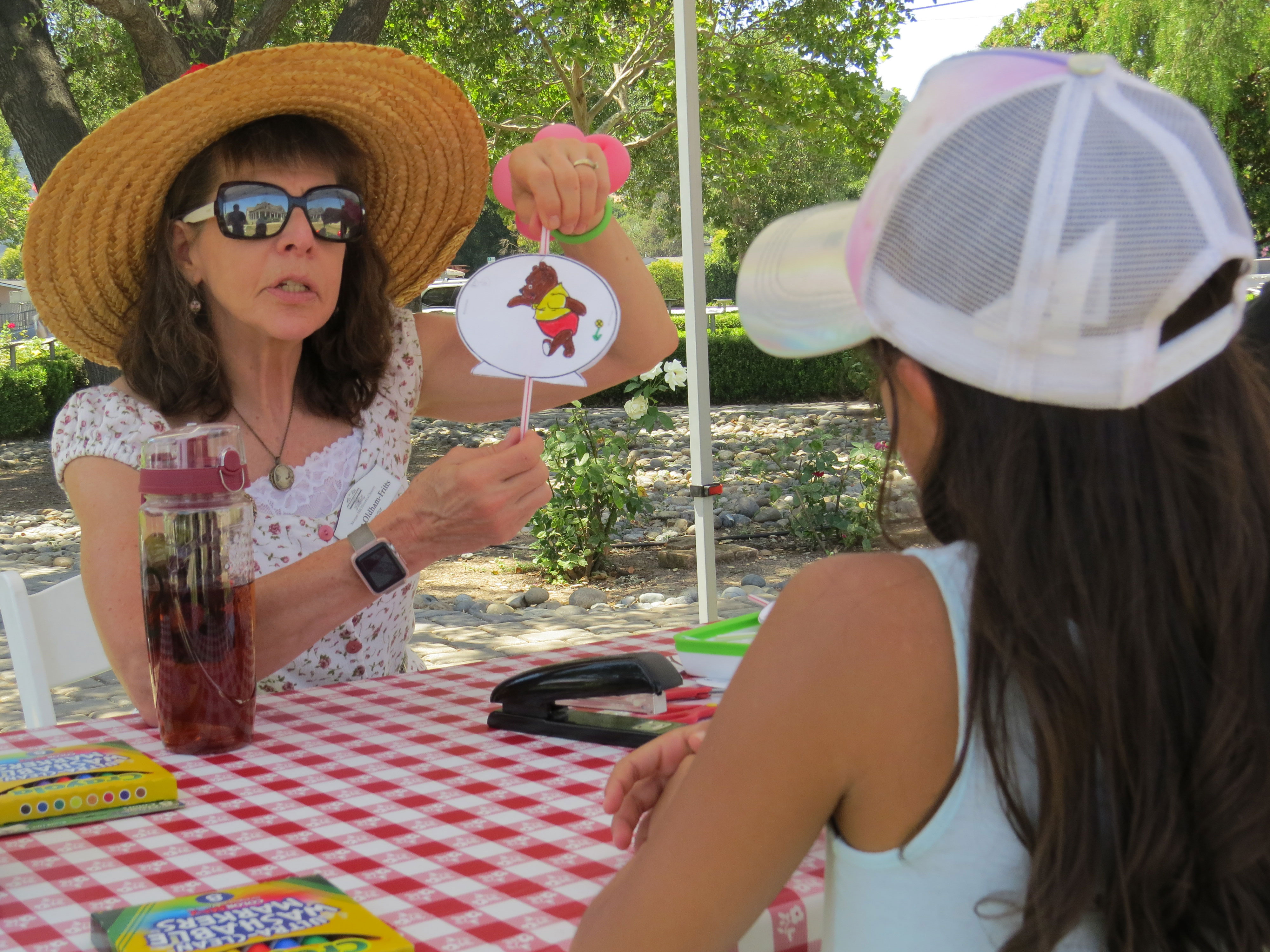 The 2-½ acre Villa Mira Monte estate is located at 17860 Monterey Road two blocks north of downtown Morgan Hill. The complex is on the Registry of National Historic Landmarks. Considered Morgan Hill’s “Central Park,” the site has been transformed into a place where residents of not only Morgan Hill but also the communities of San Martin and Gilroy can celebrate the South Valley region’s colorful agricultural past, said Nancy Reynolds, a volunteer with the MHHS who helped develop the event.

“We try to provide activities for all ages, but it’s definitely focused on the kids,” she said. “We use it as a tool to get people to come here. Maybe when they’re driving by, they might want to stop and see what’s happening. It’s really good exposure. It gives people an opportunity to come together as a community and discover Villa Mira Monte.”

Visitors to the Villa Mira Monte Community Picnic either brought their own picnic lunches or purchased a hot dog meal cooked by GVA Cafe’s Rene Carrillo. They also had many options for entertainment including listening to live bluegrass music by the Foggy Memory Band, petting and feeding farm animals from Teresa McPartland and miniature horses from DreamPower Horsemanship, and taking a selfie next to a bright red restored antique fire engine from Jim Xaviar. Dance caller Mavis McGaugh gave parents and children instructions in how to step fancy and free with Victorian reels and circle dances. A children’s craft and fun fair area provided youngsters with a place to make their own 19th-century era toys and games as well as get their faces painted or receive a balloon animal. 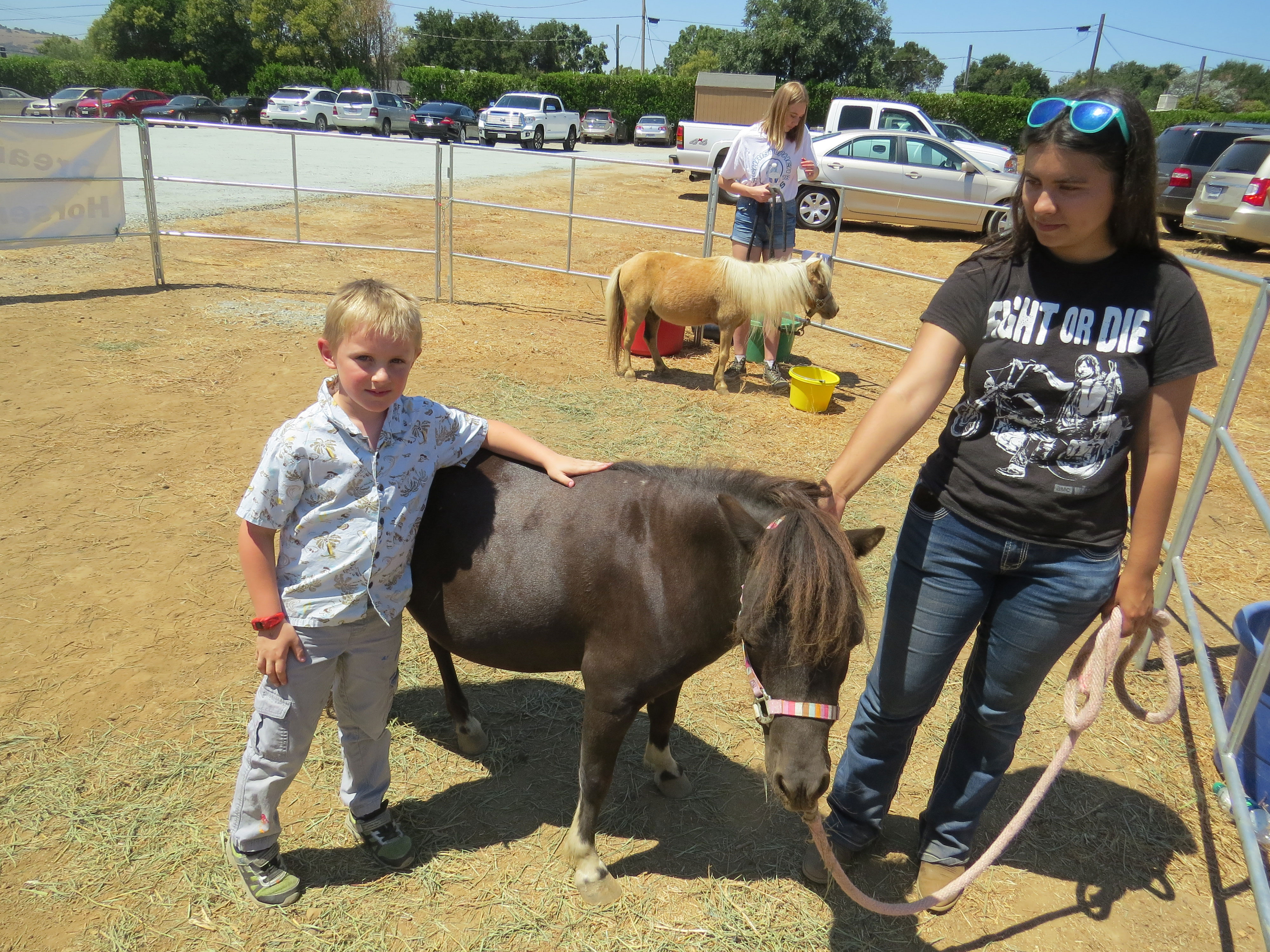 Other activities included wine tasting in the Hiram Morgan Hill House from Mann Cellars and Paradise Valley Vineyards and a “vintage sale” where people could purchase antique objects as keepsakes.

MHHS volunteer Ellie Weston said the annual picnic gets more popular every summer as word-of-mouth and social media builds the number of families who attend.

“It’s an important event for the Morgan Hill Historical Society,” she said. “Every year it gets a little bit bigger. People really support it.”

MHHS Board President Kathy Sullivan said the picnic has grown into a fun community outreach program to encourage residents from Morgan Hill, San Martin and Gilroy to explore the rich history of the South Valley and discover the pioneering and agricultural heritage in a place about 100,000 people call home.

“We started it because we thought it would be a good way to open it up for a fun and family-friendly picnic where people get to come and see the place and discover the region’s history,” she said. “We created a lot of things to engage kids so that we have community involvement. It’s not a fundraiser. It’s for exposure. The objective is to encourage people to visit who maybe have never been here.”

Villa Mira Monte gets its name from the location of the home built as a country estate by Diana Hill and Hiram Morgan Hill with a special view from the front porch of the El Toro Mountain located a mile or so to the west, Sullivan said.

“Typically, wealthy people had a home away from the inclement weather of San Francisco — the cold and the damp,” she said. “Diana inherited 5,000 acres of land from her father, Daniel Murphy, and the Hill couple decided to build this house conveniently located between the railroad tracks and El Camino Real (Monterey Road). So there are two approaches.”

The Hills would have been pleased to see 21st-century residents of the South Valley using their Victorian-era home as a fun social outing on a relaxing summer Sunday afternoon, she said.

“We have to assume that they brought people down with them and people came to visit them,” she said. “We don’t know much about the Hills and their lives here. They lived in this house and then disappeared primarily because of the scandal in San Francisco caused by Morgan Hill’s sister.”

A socialite in San Francisco in the 1880s, Sarah Althea Hill became a national celebrity when she sued silver barron millionaire U.S. Sen. William Sharon for divorce in 1883, claiming the two secretly married three years earlier by private contract. The case created front page headlines in newspapers across the United States and set legal precedent. The Hill’s marriage became strained because of the social embarrassment the courtroom drama brought to the family. Villa Mira Monte became a favorite country getaway for the family.

“About that time she and Morgan Hill kind of became estranged and he went to the Nevada ranch in Elko, and Diana and their daughter went to the East Coast and spent a lot of time there,” Sullivan said. “We don’t have pictures of them when they lived here. We don’t have many stories about their lives here.”

One story that has passed down through history is that the Hills would send their coachman in a horse-drawn carriage to pick up the two girls of the Pinard family in Madrone to come and play with their daughter, Diane, at Villa Mira Monte.

The summer picnic helps make a new generation of Morgan Hill residents aware of Villa Mira Monte and appreciate the South Valley’s history, said MHHS volunteer Jan Dommer, who served as the co-chair of the community picnic with Sue Ort, another volunteer.

“I heard several people who came here today say, ‘You know, I’ve lived here for 10 years, 20 years and Gilroy for 15 years and never knew this place was here and there was a history museum here,” she said. “So there are a lot of families here today and they’re becoming aware that there are educational activities. We have the schools come in on field trips on a regular basis. The idea is to create an appreciation for the past for a new generation in the area. There are a lot of kids today, and they’re enjoying the animals — and, of course, it’s got a historic context for the South Valley’s agricultural history.”

The Hills would be happy to see the summertime picnic and the many children who come to visit and learn about the local past, Kathy Sullivan speculated.

“They would probably have welcomed visitors here,” she said. “And I hope today if they’re looking down on us Diana and Morgan Hill would appreciate that it’s being used and taken care of and people are enjoying it.”