Mount Madonna High School students pushed the envelope of environmental theatrical story-telling and made a splash with three recent performances of the Broadway hit “Urinetown: the Musical.”

The satirical comedy is set in a dystopian “near future” America where private toilets are outlawed. The evil mega-corporation Urine Good Company has taken control and charges people big fees to use public latrines. Those who can’t pay up must pay dearly.

The musical opened on Broadway Sept. 20, 2001 for a run of 965 performances and was nominated for 10 Tony Awards, winning three.

Fresh, relevant and provocative, “Urinetown” is a story with a controversial, edgy message couched in humor. About 60 Mount Madonna students performed the show Jan. 26 – 28 at the school’s Hawks’ Nest Theater. Playwright Greg Kotis got the idea for the musical when, on an ill-budgeted visit to Paris in 1995, his low funds forced him restrict the number of his visits to the pay public restrooms ubiquitous in that French city. The story satirizes the American legal system, capitalism, social irresponsibility, bureaucracy, corporate mismanagement, and municipal politics.

Photo by Ross Bryan
The Mount Madonna High School cast of “Urinetown: The Musical” takes a bow at the conclusion of a recent show.

“From a production level, the chorus is active, the music intriguing, and the dancing selective and dynamic,” said director Sampad Kachuck. “While the subject matter engenders healthy discussion, the style asks performers to inhabit their characters boldly but to play the comedy seriously. As our country debates nationalized health care versus privatization, struggles with the economy, confronts the reality of our decreasing resources, as well as evaluating ethically whether the end justifies the means, this play’s subject material is timely.”

“Urinetown” follows the model of German playwright Bertolt Brecht who provided social commentary through his epic theater, he said.

“We are continually reminded we are in a play and the message is paramount: how are basic human rights balanced against constricting resources?” he said.

High school senior Will Murphy plays the part of “Officer Lockstock” in the show, narrating the background details of the strange world of “Urinetown” to the audience.

“The plot is that all of the restrooms are now controlled by a private business to regulate water consumption because there’s been a drought for a number of years,” he said. “It’s sort of an abstract commentary on commercialism and resource management.”

The environmental social theme draws on the philosophical works of 19th century author Thomas Malthus’s teaching who described how the human population rise can hit a ceiling if food, water and other life-giving resources become limited.
“We’re basing it off his whole mentality that there is a finite amount of resources and we will reach that limit eventually,” Murphy said. “This show is sort of a scenario of what happens before we reach that limit.” 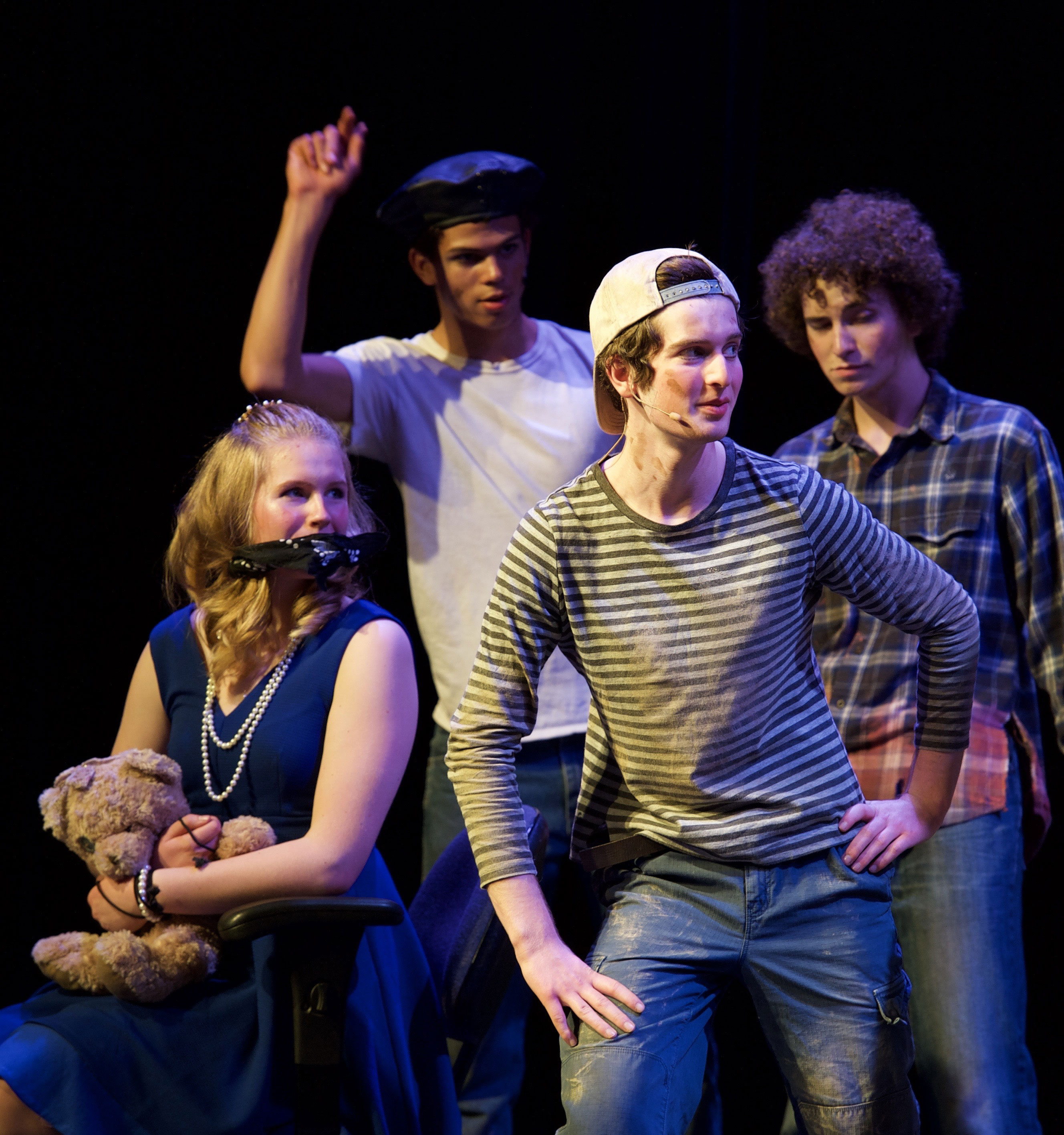 Murphy has ambitions to be a film and stage performer later in life because of the energy of theatrical story-telling. “Acting gives me an outlet for creativity and I like being in front of large crowds of people,” he said. “It gives me a rush.”

He admits the show has an unusual title. In one scene his character references in a dialogue how wince-inducing the name “Urinetown” can be.

“When I first heard the title, I was a little apprehensive,” he said.

Mount Madonna senior Aimee Kerr, 18, plays a clown named “Miss Pennywise” and said she’s having a lot of fun performing in the show.

“I run the urinal in the play, and I make the poor folks pay for the privilege of going to the bathroom … I think it’s important to see the show as a warning of what can happen if certain people abuse power.”

She sings several times in the show and says the quirky tone of the music serves as a contrast to the dark social theme of the story.

“The music is very upbeat for the topic,” she said. “It’s very happy for what it’s about.”

For Mount Madonna freshman Kira Kaplan, “Urinetown” serves as her introduction to high school theater. For the most part, the theme of the play is that humans are all looking out for ourselves, she said.

“We have needs to be met, and if they aren’t, we’ll do what’s in our power to tilt the odds in our favor,” she said. “But what happens when all of society is doing things that (primarily) benefit themselves? If everyone is looking out for ‘number one,’ then nothing will get done and nothing will change. Instead every person must compromise and make some sacrifices and adhere to decisions that aren’t necessarily in their own favor — for the greater good.”

In “Urinetown,” the poor people of society are stuck between a rock and a hard place in dealing with the stratification of wealth and poverty and society along with the environmental challenges that hit those without enough funds for a good quality of life, said freshman Ronan Lee.

“This makes me think that given global warming, is this what we are heading toward?” Lee said. “In this very moment we are in the prime of the scientific revolution, yet we still litter the streets and pollute the world for the next generation. Will it go so far that we will end up with no clean, healthy water? Will we have to abide by the same rules as in the story?”

The reality of Urinetown is already upon the world, the student said.