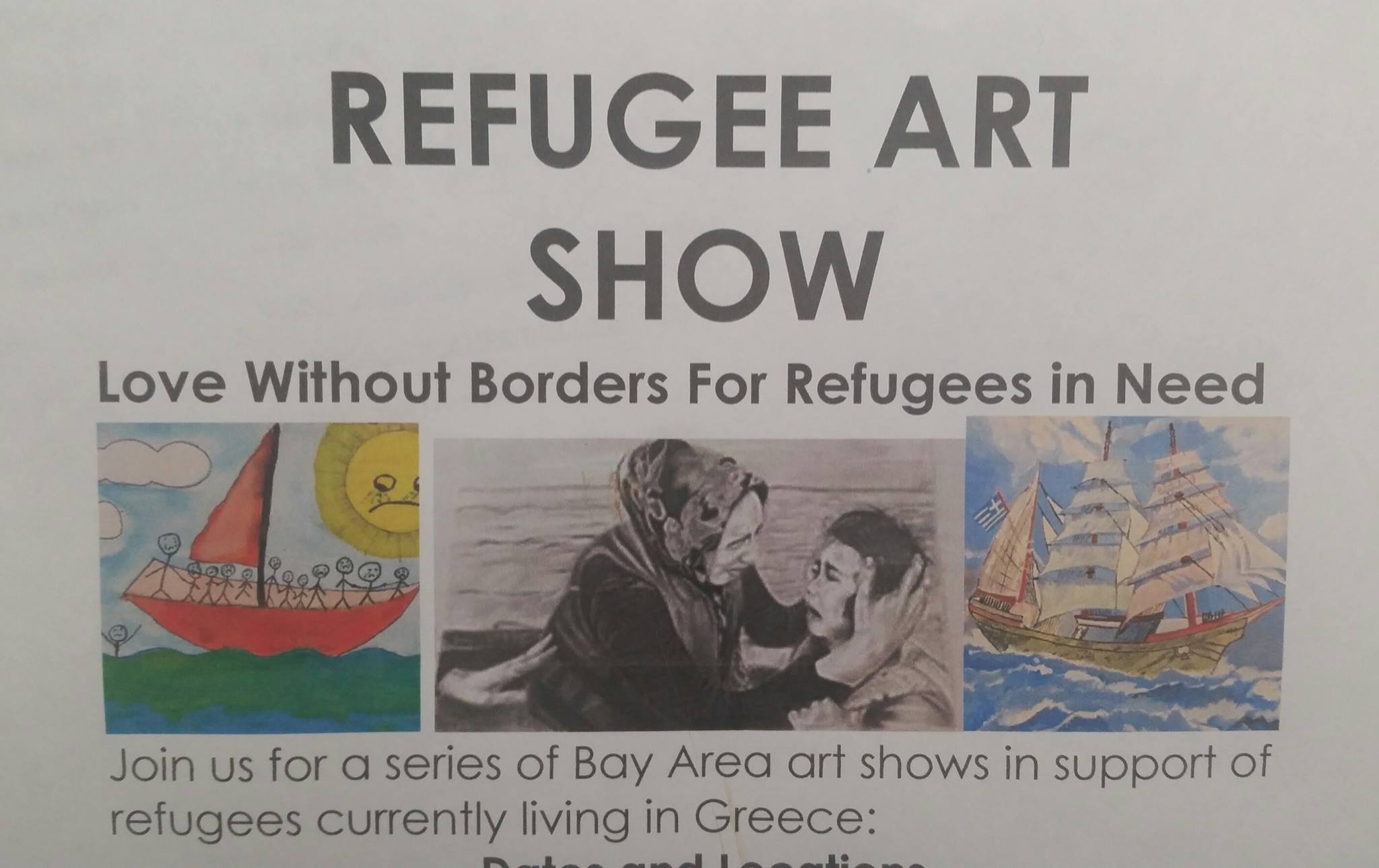 A unique art show, highlighting the work of children and adult refugees, comes to GVA Café on June 3. It will be one of three Bay Area art shows and accompanying receptions, presented by Love Without Borders – For Refugees in Need. The exhibit will feature pieces of artwork created by refugees who are currently living in camps and housing communities in Greece. The art program from which these pieces were generated has been featured on NBC Nightly News with Lester Holt. But it tells the stories of people who often lack a voice.

Kayra Martinez, a flight attendant, founded Love Without Borders – For Refugees in Need in 2015. Now based in Germany, Martinez became aware of the growing refugee crisis, and started working with non-government organizations (NGOs) to see how she could help. Because she speaks German, she could translate and help distribute clothes, but she wanted to do more. So, she started visiting other countries that had become landing spots for these involuntary immigrants, such as Austria, Hungary, and Serbia, where borders were still open to refugees. When she got to Greece, she was shocked at how bad the situation was. “People living in the streets,” she recalls, “in tents. Vulnerable people, with no structure.” 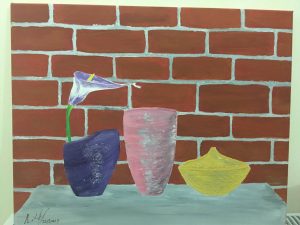 She estimates there were 40,000 people in the Greek camps, but that number has grown considerably in less than two years. And those other European borders have now closed. Soon, she was coming to Greece on a regular basis, mostly working in Camp Nea Kavala, located in northern Greece, near the Macedonian border.

“I discovered that there was a large gap between the NGOs and people. The one-on-one with people was completely missing,” Kayra said, while conducting a phone interview from Greece, where she was staying with a refugee family.

In an already chaotic situation, keeping families together was an added challenge. Men often went off to find work. Mothers from the tents would have to stand in line for food for so long that the food would sometimes spoil. Kayra understood their frustration of not being able to provide for their families. So, she began her own organization, which encompasses multiple projects. 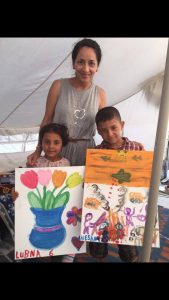 “I started taking calligraphy paper and crayons into the tents,” Kayra recalls. “I saw how calm the children were when they were drawing. And the subject matter was impactful. When I first started, they were drawing the Aegean Sea in red, stick figure bodies that were upside down, lots of black. There was a lot of trauma there.”

Art provided a medium for working through and overcoming that trauma. “I started a year and a half ago,” Kayra says. “Now their works are colorful, reflecting love and hope, rather than the dark, terrible times they went through.” Artists range in age from three years old to adults.

At one point, Kayra would bring 10 to 15 children, and their families, to her home to create art. In the beginning, it was something to take their minds off the struggles of their daily lives. But Kayra realized those art sessions could serve another purpose.

One day, Kayra decided to put some art on a canvas, and offer it for sale. As a flight attendant, she had connections throughout the world. She sent canvases to Norway, Sweden, and the U.S. The resulting sales helped provide funding for supplies, and allow the refugees to continue creating art. Now, the art shows allow these families to generate income, and help provide medical exams and other necessities. 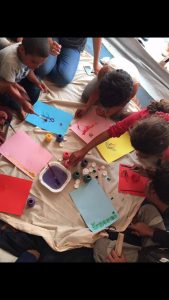 Connie Ludewig, a resident of San Martin, community activist, and member of the San Martin Chamber of Commerce, says, “I am thrilled for the opportunity to bring awareness to Morgan Hill about the lives and needs of the families who left everything for a chance for safety in a foreign land, Greece. This is such an important humanitarian story.” Connie reached out to Renee Carillo, the owner of GVA Café, who generously offered the space for the show.

Vicki Trapalis, a dependency attorney in San Francisco representing foster children, spent a year volunteering in one of the Greek camps. She’s already been back once and plans to return for a few months this summer. As the event coordinator, she says, “I became interested in having the Refugee Art shows in the Bay Area while I was in Greece and preparing for my return home. It was a way to stay connected to the work in Greece, to shed light on this humanitarian crisis, and to provide a way for people to help locally and have an impact globally.”

Tickets for the show and reception are $15, available at www.refugeeartshowsbayarea.eventbrite.com. GVA Café will provide a brunch buffet available for purchase, with some proceeds benefiting the art show. There will also be a raffle and silent auction, thanks to the generosity of local merchants.

If you plan to attend the show, you can expect to see 150 to 200 pieces of art, depending on how much art is sold at the two previous Bay Area shows, in San Francisco and Berkeley. Artwork will include sketches, acrylics on canvas, watercolors on canvas from the children, calligraphy, and photography. Kayra estimates that the show will represent about 60 different artists from 10 different countries. Prices will range from $25 to $350. If buyers want to donate additional money to the sale of art, that money will go toward supplies.

Vicki adds, “Putting the shows together is a lot of work, but so worth the efforts. I organized the Bay Area shows that we had in November 2017 in San Francisco, and in Marin County. I am excited to be involved again. Kayra’s program has provided such huge opportunities to so many talented refugee artists—providing them a venue to showcase their work, earn some money, and have their voices heard through their art has impacted their lives tremendously.”

For Kayra, the opportunities, and the struggles, continue. But she’s encouraged. “I’m challenged every single day, especially being here in Greece,” she says. “But the reason I started these projects I’m creating is to help refugees. These projects are successful. They keep me motivated. I see big changes in families, with fathers able to stay and support their families.”

That in itself is a work of art.

Love Without Borders – For Refugees in Need Art Show.