Bob Foster instilled the importance of family, community to children 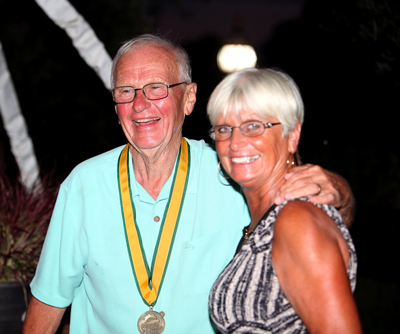 Bob Foster and emcee Laura Perry have a laugh at the LEAD Award dinner July 21. Photo by Chris Harrington

His sons Dell and Chris Foster did a tag-team presentation highlighting their father’s role in shaping their lives as well as the quality the community. Sons Blaney and Corey and their families were also present at the dinner. The senior Fosters have 15 grandchildren, making holiday gatherings fun.

“The first message we learned from our parents is that our relationship with our family is very important,” Chris told the audience. “It was also important to our parents that we operated as a family no matter what.”

He recalled his growing up years when Bob and his mother, Nancy Foster, emphasized eating dinner together every night and going on family vacations.

“And beating each other up was a very important part of our lives,” Dell said, with the laughter of those attending the gala. “But despite that, we’re still family and we’re still connected and close and we still help each other when they need it.” 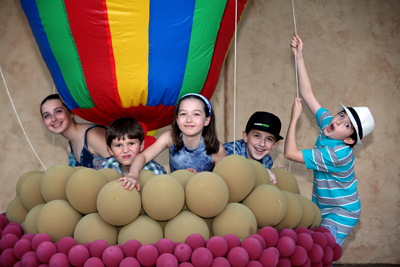 The second lesson emphasized by Bob and Nancy was that the sons were expected to contribute to their community.

“That was our parents’ message to us, in some form or fashion, not to just sit back as recipients,” Dell said. “There are givers and there are receivers. We are expected to be givers.”

Born in Long Beach, Bob Foster grew up touring the United States as his father served in the U.S. Navy. At age 2, he lived with his parents in Pearl Harbor, Hawaii, when the Japanese attacked the U.S. naval base. He met Nancy when they both attended Willow Glen High School in San Jose. They became sweethearts. He attended San Jose State University and the University of California, Berkeley Boalt School of Law. The couple married in 1962.

After passing the bar, he and Nancy lived for a time in Sacramento where he worked as a California Deputy Legislative Counsel. In 1965, the Fosters came to Morgan Hill and the young attorney joined Ernie Rusconi’s law practice. The two men established Rusconi and Foster in 1967. George Thomas joined the firm in 1972, adding a third name to the Rusconi-Foster-Thomas law firm. Bob retired in 2015.

Foster’s 50 years of practicing law include working as Morgan Hill’s city attorney, as well as a volunteer judge during the 1971 riots at San Jose State University. He also found time to mentor his sons as Boy Scouts and coached their sports teams. He actively supported the YMCA, United Way, and Goodwill. He served as president of the Morgan Hill Chamber of Commerce. He was selected as the Chamber’s “Citizen of the Year” in 1969.

Family remains an important part of the Foster code, and it’s one reason they have stayed active. Another reason for their dedication to the community comes from the couple’s year living in Sacramento early in their marriage. The Golden State’s capitol city in the early 1960s was a mess of urban decay, Nancy said. When they moved to Morgan Hill they wanted to protect the farm town of 4,000 people from the growth of nearby San Jose.

After a couple of years living in the community, Foster decided to run for the Morgan Hill Unified School District school board in 1967. With two toddler sons, and two more sons coming soon, the young lawyer and Nancy, an elementary school teacher, realized quality public education was a vital part of making the town a welcome place for families.

When Dell was 3, his father would put him in the back of a little red wagon and walk the streets of Morgan Hill knocking door to door. People asked, “Who are you and why are you running?” Bob recalled. And he would say, “See that little kid out there. I’m running because I want to make sure he’s well educated.”

Bob’s mission to protect the family-friendly quality of life in Morgan Hill has driven him to stay active for more than half a century. His dedication to duty as a citizen serves as the main reason Leadership Morgan Hill honored the 78-year-old attorney with the 2018 Leadership Excellence Award. At the LEAD gala, Foster described why he stayed involved over the years to enhance education and civic policy in Morgan Hill.

“You have to be involved in the community if you want to live in a quality community,” he said. “And that’s what Leadership Morgan Hill is all about. That’s the reason it was started — to help each and every person who comes to Morgan Hill who wants to be involved to learn how to get involved.”

Nancy beamed with pride at the entire Foster family’s commitment to civic work.

“I have to say that I’m delighted that our sons got the message that we presented to them growing up,” she said. “The other thing I would like to say is that when we first came here, we were young, very young, and it was a community that people said: ‘You don’t move to Morgan Hill. You move out of Morgan Hill.’ And we found that there were people who stayed in Morgan Hill and they welcomed us.”