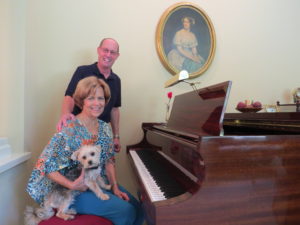 Photo by Marty Cheek
Sue and Chuck Berghoff and their dog, Winston, in their Morgan Hill home. Sue was diagnosed with Lewy Body Dementia in 2017.

For Sue Berghoff, it started with words. Or, more accurately, the loss of them. A successful, well-educated business woman, the Morgan Hill resident was known for her skill in using not just the right word, but the precise word in conversations. Suddenly, she was struggling to access her impressive vocabulary. Her journey is chronicled in “Sue’s Story,” a short documentary detailing her battle with Lewy body dementia.

“I could see things happening in my ability to find the word I wanted to use,” recalled Berghoff, 72, in the film’s opening moments. “I had a 30-year career in senior management roles in the technology industry, and I spent eight years teaching business writing and English as a second language at San José State University.”

Then a skill which had always been effortless was now challenging.

At age 68, Berghoff knew something was wrong. It was not only with her words but also her equilibrium and her ability to do routine chores like balance a checkbook. In 2013, a checkup and some basic cognitive tests, mostly on paper, yielded a few concerns. But her doctor found her to be in good health. “See you in 10 years,” was the message she received.

Then in 2017, a return visit to her doctor led to a referral to a neurologist in the Memory Care Unit at Kaiser Permanente. This time, exams and a PET Scan revealed that LBD, a progressive brain disorder that damages areas of the brain that regulate language, movement, sleep, and other life functions. LBD is a dementia spectrum disorder, with some similarities to Alzheimer’s and Parkinson’s, making diagnosis difficult. There is no cure. 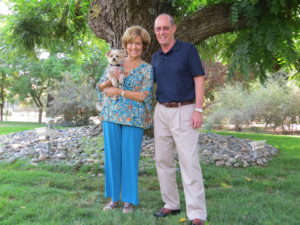 Photo by Marty Cheek
Sue and Chuck Berghoff in the backyard of their Morgan Hill home.

Sue and her husband, Chuck Berghoff, were devastated. She had enjoyed an active lifestyle, a loving family, and varied interests. Now she was wondering how to battle a disease she’d never heard of, facing an uncertain future. And with it, an underlying social stigma that has made dementia challenging to discuss.

“I spent six weeks feeling sorry for myself,” she recalled in the documentary. “Then I said to myself, ‘Alright, Sue. That’s enough.’ I got my feisty side back … I thought, ‘I have choices. I want to help others.’”

Sue decided to focus her energies on educating others about LBD, and Chuck supported her idea.

While LBD is the second most prevalent form of dementia next to Alzheimer’s, affecting roughly 1.5 million Americans, few had heard of it before the deaths of Robin Williams and Casey Kasem drew attention to the disease.

The risk of dementia nearly doubles every decade after the age of 65. With about 10,000 to 15,000 Americans turning 65 each day, a doctor diagnoses someone with dementia about every 66 seconds. The prognosis for LBD can vary greatly depending on the patient but is six to nine years from the date of diagnosis, on average. 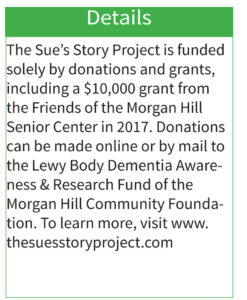 In September of 2017 the Berghoffs hosted a backyard fundraiser that raised $43,000 for two nonprofits dedicated to LBD awareness and caregiver support. Chuck asked how many of the guests knew someone with dementia and was stunned when everyone raised their hands.

Inspired by Sue’s mission, a team of local filmmakers including Robin Shepherd, Mattie Scariot, and Nils Myers began working on a documentary they called “Sue’s Story.” For seven months they carved out time for scripting, filming, and editing sessions, at the Berghoffs’ home and at Stanford University.

“Sue’s Story” debuted at the 2018 Poppy Jasper International Film Festival and won Audience Choice for Best Documentary. After the screening, Sue and Chuck were joined onstage for a Q&A with experts from Stanford, Genentech, the Brain Support Network, and Kaiser Permanente who appeared in the film. From that moment, a discussion about dementia, previously left unspoken, began to ripple through the community. 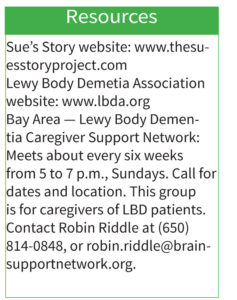 The Berghoffs worked with Robin Shepherd to create The Sue’s Story Project, a model for social impact and engagement. Its goal is to advance Sue’s mission through partnerships to host community awareness-building events, increase funding for research, and advocate for support services for families living with LBD.

In the film, Sue said, “Doing positive things for others is better than worrying about yourself.” Her soft blue eyes welled up, but she continued with a determined tone, “This is the most important thing I feel I’ve ever done in my life.”

Currently, the only way to confirm an LBD diagnosis is postmortem, through a brain autopsy. That makes it difficult to attract funding for research or to conduct clinical trials, which could lead to therapies and a cure for LBD. Sue has already decided that after she passes, her brain will be donated for dementia research.

After the diagnosis, the Berghoffs began searching for helpful resources. That led them to find Robin Riddle of the Brain Support Network in San Mateo. She invited Chuck into her LBD caregiver support group and connected the Berghoffs with Dr. Kathleen Poston who spearheads LBD research at Stanford. They continue to stay in touch with Riddle and Poston, exploring new ways to raise awareness for LBD.

The Berghoffs are advocates for an LBD caregiver support network here in the South Valley. Morgan Hill and Gilroy are officially recognized by the World Health Organization as Aging-Friendly Cities and working creatively to fulfill this designation.

Day by day, the Berghoffs are adjusting to the quality of life changes that LBD brings. They spend their time with family and families and keep attending community events. It’s often a challenge for Sue to struggle to keep up with people’s conversations.

Some days she delights in working in her garden. Other days, she’s frustrated at not being able to follow her favorite recipe. Chuck is learning to live in Sue’s reality, striving to keep her days simple, organized, with as much activity as his wife can manage.

Once again showing her feisty side, Sue said, “We’re not doing enough. And we’ve got to do something quickly, because there is no cure. I don’t know what comes next for me. But hopefully I can contribute and help make things better.”

Her words, so heartfelt, couldn’t be more precise.