Dealing with the region’s growing  homelessness is a moral challenge for society that Morgan Hill fine arts photographer Kirti Fatania-Bassendine seeks to address.

The sight of people pushing shopping carts filled with worldly possessions, laying in sleeping bags in business doorways, or finding shelter in camping tents along creeks is becoming increasingly common for South Valley residents. Generating social awareness through art was the intention of “Homeless Voices,” her photographic exhibition that ran in January at the Gilroy Center for the Arts. Her show combined still photography, story boards and video to provide a multi-faceted insight into local homeless people’s lives and the underlying issues driving homelessness in the Santa Clara Valley.

“As we carry out our day-to-day lives, we are oblivious to the struggles of those individuals we encounter,” she said. “The grocery store cashier, the fast food clerk, the student in the library — anyone of them could be homeless. A medical emergency, financial crisis or natural disaster means any one of us could be facing homelessness in the near future. The reality of the world we live in is that any one of us is just one day, one moment, one tragedy away from homelessness.” 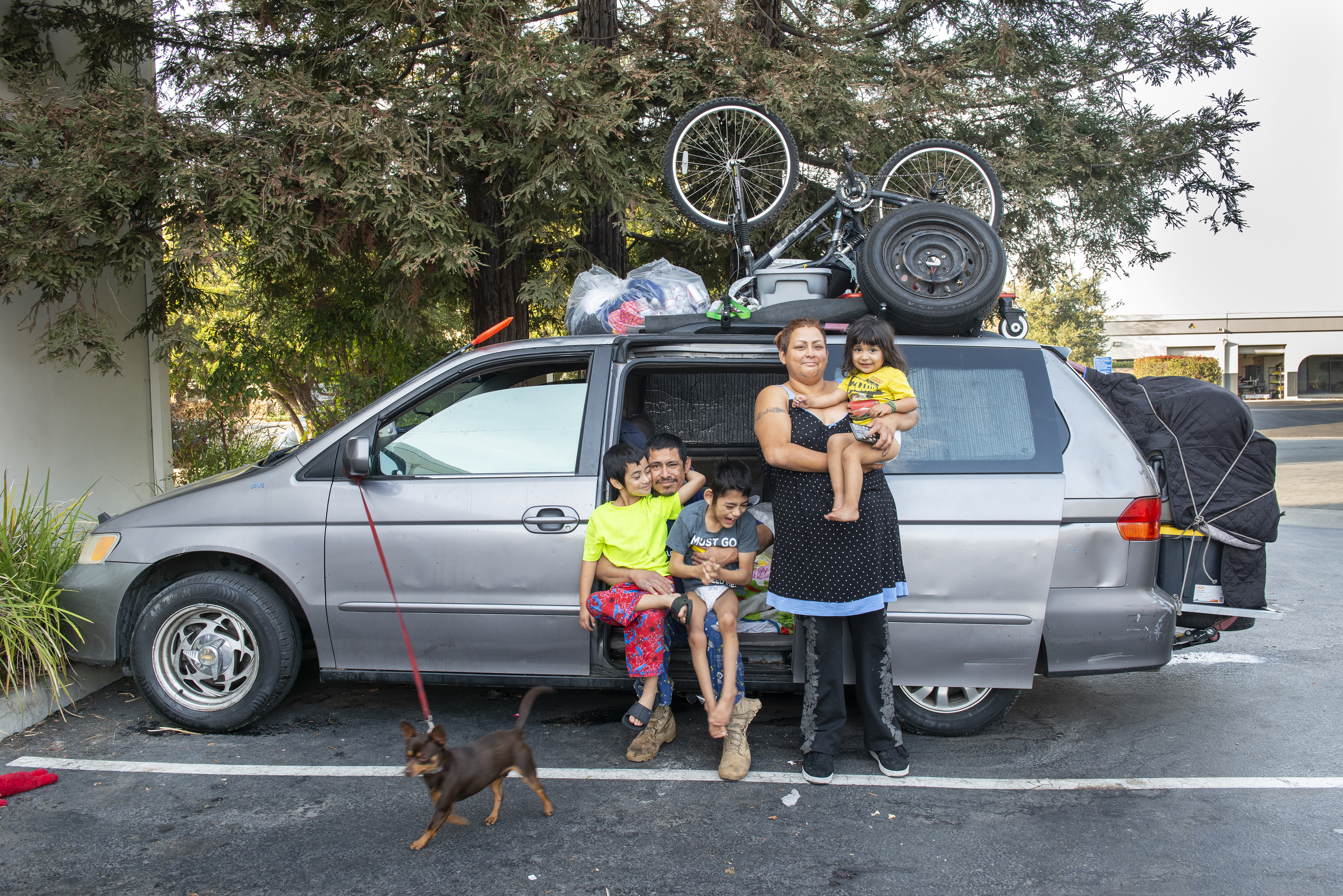 Photo courtesy Kirti Fatania-Bassendine
Carlos and Faviola with their children, Alex (9), Bruce (7,) Destiny (3) and their dog Rocky, live out of their van.

One of the exhibition’s portraits depicts an elderly bearded man sitting in a wheelchair. He wears a baseball cap backwards on his head and his legs are crossed. He stares at the viewer with quiet dignity as if a figure in a Rembrandt painting. The title is “Kenneth.”

The card under the photo shares Kenneth’s story: “I had three strokes and I had a brain operation in Boston. After a stroke I couldn’t talk for two months. Sometimes I slur when I speak too fast. I was a good guy and respectful. I’ve never been in trouble in California.”

Kenneth had his own painting business and landscape business. After he got a divorce, he stayed at a hotel down the street. He hasn’t had a home since 2005. Friends helped him by guiding him to shelters and support systems for the homeless. The main problem for many homeless people like Kenneth is finding money for food and shelter.

“My hope is that homeless people with children who are young have a support system and a team of professional social workers that can get a plan together to help them,” the card read. “Home is a safe, private place where you can put your belongings safely and you can secure it the way you want to.”

The vision of the exhibition is to create a community space in which to tell the stories of South Valley’s homeless neighbors with compassion and dignity, Fatania-Bassendine said. “The exhibition is designed to put a name to the face of homeless in the city and understand their stories, removing the preconceptions and false images of what we may assume a homeless person to be, and reminding each other that we are all fellow human beings in need of compassion and respect,” she said.

In the future, the exhibit will move to other cities struggling with the same homeless issues, including Monterey, Santa Cruz, San Jose, Berkeley, Oakland and San Francisco, she said. In each city more local stories will be documented. By making the plight of the homeless population visible, Fatania-Bassendine hopes to raise awareness, encourage compassion and help bring in more resources to improve the safety net available to the homeless and help them get back on their feet.

The reasons for homelessness are complex. They’re also very personal to those who find themselves without housing. Santa Clara County saw a rising number of homeless because of the six-year recession starting in 2008 which impacted the housing industry. Recently, Silicon Valley’s job growth brought in high-tech workers. Many families living at the poverty line saw their rents raised, forcing them out of homes, said Jan Bernstein-Chargin, executive director of Gilroy’s Compassion Center. The nonprofit provides a place to go during the day and find warmth and food and have access to basic necessities such as hygiene.

“We didn’t build housing during that time, which is a long time with a growing population,” she said of the recession. “Then the economy came back — came roaring back. People and jobs came moving into this area. Basic laws of supply and demands. High demands for housing, the rents went up, the price for homes went up. The people least able to adapt to the higher prices, a lot of them became homeless.”

“You’re stuck in a place where you can’t afford to live,” she said. “That includes people with disabilities or chronic illnesses. They have the additional problem that their doctors are here and they’re getting medical care. There are homeless people now who are in chemo and dialysis.”

For some in the homeless population, drug and alcohol addiction is a component of their condition. The group reporting the highest incidence of substance abuse is homeless veterans, Bernstein-Chargin said.

“Research shows that substance use/abuse tends to get worse while people are homeless, and to be reduced once these same people get housing as it is often a coping strategy for the discomfort and trauma of homelessness,” she said.

The Homeless Voices photographs place a human face on a complex social issue, said Assembly-member Robert Rivas who attended a Jan. 12 reception of the exhibition.

“You hear about the millions of Californians struggling to make ends meet, whether it’s lacking affordable health insurance, the housing prices we’re certainly in and the lack of housing options for so many people,” he said. “All of these stories really put things into perspective. These are real people who live in our community.”

Gov. Gavin Newsom made ambitious campaign promises to combat California’s housing crisis, including an effort to build an unprecedented 3.5 million new homes by 2025. Newsom proposes the state spends $2 billion in one-time and ongoing affordable housing cash. His budget includes $500 million in one-time cash for local governments to combat homelessness. Of that, $300 million will go toward regional planning, and $200 million as awards for cities that build new shelters or permanent supportive housing. The budget goes from $80 million to $500 million to fund a low-income housing financing tool, the low-income housing tax credit. It also includes $500 million in one-time cash for “moderate-income” housing production, or the so-called “missing middle” of housing for California’s middle class. (Newsom urged Silicon Valley companies to match this). His proposed budget includes $25 million to get more homeless on federal disability programs.

“This is a new time for California with a new governor and a new leader who is fighting for the state,” Rivas said. “And I appreciate the budget he’s proposed.”

The challenge of homelessness brings other problems for the men, women and children put by life circumstances into this situation, Bernstein-Chargin said. The county’s policy of “Housing First” means that finding adequate shelter is a treatment for a lot of what people are experiencing living on the street in terms of mental and physical health issues, she said.

“A lot of people who are homeless are not getting sleep. Sleep deprivation is a torture method,” she said. “And if it’s going on for months, it becomes a mental health issue which might not be there once they start getting sleep.”