Curtain Up Theater Review by Camille Bounds: “Big River: The Adventures of Huckleberry Finn” is a joyful musical ride down the Mississippi

Published on February 6, 2019 on www.MorganHillLife.com 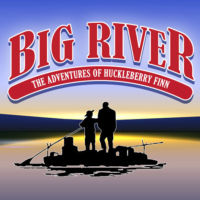 This is also how the musical “Big River” begins, keeping the original story intact, to bring all the characters to life by enriching them with words and music that makes the most important American novel of the 19th century even better. “Big River” opened on Broadway in 1985 and walked off with seven Tony Awards including Best Musical, Best Score, and Best Book.

When Twain’s name comes up in conversation there is always a warm, twinkle in the eye feeling that seems to materialize. Anyone who knows anything about Twain knows that some of his yarns are really outrages. You know that he embroiders stitches of the truth and humor in his entertaining well written stories. You also know that there is usually a happy ending with all the loose ends neatly tied up in a neat package. Blend this with music and lyrics by Roger Miller and writer William Haupman and you have a delightful, grand musical that leaves the viewer warm and chuckling long after the curtain comes down.

Combine this with fine tuned direction by Doug Brook and delightful choreography by Ester Selk, with a superb, solid cast well dressed for the times by Costume designer Mae Heagerty-Matos , a marvelous orchestra, led by Joseph Kelly precise sound and lighting by Angela Young and Michael Glenn Munoz and a raft by set designer’s crew- Brett Carlson that takes the audience down the Mississippi for an memorable ride of joy and adventure with Huck Finn and the runaway slave Jim.

Ben Hatch as Huck has just the right mix of imp, innocence, and a simple sensitivity to beautifully play the part with loving authority. He is easy to watch and listen to as he carries the story to the audience with the advantage of being a really believable, amiable fellow.

Michael Johnson as Pap Finn portrays the best, despicable, sot possible. His “Guv’ment” number shows his talent and the genius of Roger Miller’s words and humor. Jim, the runaway slave, is wonderfully portrayed by Anthone Jackson. His voice is meaningful and he is a fine, controlled actor. This part could turn into a caricature but he carries it off with dignity and grace. Add a lively Derek De Marco as Tom Sawyer and a large super cast and you have a grand moment in well done theatre.

This production has 17 songs that range from gospel, spiritual and folk to country music and blues. From the opening number “Do You Wanna Go To Heaven” on to “Muddy Water,” “River in the Rain,” to “How Blest We Are” and the poignant “Worlds Apart” that Huck and Jim render are a tribute the Roger Miller’s talent and consciousness to the time and plot.

“Big River” is more than a play, it is an experience, that takes a time just before the Civil War when the South was struggling with abolitionists, having to accept the possibility that slaves were going to be a thing of the past, and how the mentality of some made for ugly reactions while others realized how they must embrace the reality of the situation. Twain took the moment and the place to recreate what the times were like and some of the ramifications.

By all means do yourself a favor and go and enjoy South Bay Musical Theatre’s fantastic “Big River.” The trip down the Mississippi River is an enjoyable, unforgettable ride.

Written by William Haupman, music and lyrics by Roger Miller, based on “The Adventures of Huckleberry Finn” by Mark Twain.