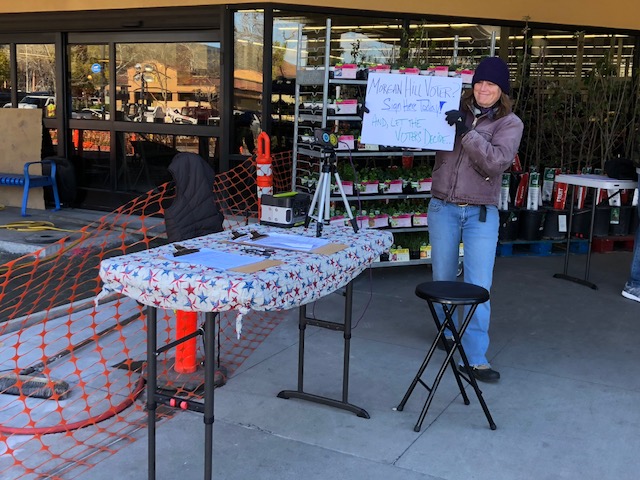 Photo by Robert Airoldi
Louise Brotz gathers signatures for a petition to force the city to put the decision on a future ballot outside Walmart.

The future construction of  two new hotels with 150 bedrooms in the Madrone Village area might lie in the hands of voters if enough signatures are gathered to put a referendum on the ballot repealing a recent change in land zoning.

The Morgan Hill Hotel Coalition needs to collect about 2,300 valid signatures on its petition intended to repeal a city council decision that rezones land located near Cochrane Road and Madrone Parkway for hotel use. The rezoning amendment was approved with a 5-0 vote by the Morgan Hill City Council at the Feb. 6 meeting. It will allow a Marriott Hotel and a Hilton Hotel to be built as part of Phase 2 at the Madrone Business Park. 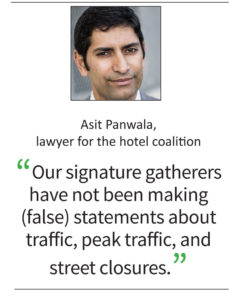 The coalition needs at least 10 percent of registered voters in Morgan Hill to sign the petition. The signatures must be submitted to the Santa Clara County Registrar of Voters on or before March 8. The coalition hired signature gatherers who, starting Feb. 9, stood outside Walmart, Trader Joe’s and other stores, as well as public venues such as the Morgan Hill Community Center and Centennial Recreation Center.

The city of Morgan Hill’s Communications and Engagement Manager Maureen Tobin sent a Feb. 11 email to residents as a “clarification” of things those signature gatherers were telling people about the referendum. It stated: “Contrary to some information being represented by paid signature gatherers, the proposed hotels generate less peak hour traffic than the approved retail shopping center expansion, no street closures are being contemplated, and signing the petition will not bring higher paying jobs to Morgan Hill.”

Asit Panwala worked with Morgan Hill attorney Randy Toch to develop the petition for the hotel coalition. Panwala’s family owns the Comfort Inn in Morgan Hill. He declined to say what other local hotels were part of the coalition. He described the city’s email as “biased” and that the petition is intended only to give voters an opportunity to decide on the rezoning of the land.

“Our signature gatherers have not been making (false) statements about traffic, peak traffic, and street closures,” he said about the city’s email blast. “I don’t know where that comes from.”

But Morgan Hill City Manager Christina Turner said the email was sent because Tobin had received several calls from residents asking about the petition, describing what they had been told by the gatherers. The city believed there was misinformation being presented about the petition. The city’s email stated: “It is a crime to misrepresent or make a false statement regarding the contents or effect of a petition.”

“A lot of information was circulating in the community,” Turner said. “There were a lot of people coming to us, there was information on social media, so we wanted to make sure the community understood what the council had done, what they had passed, and what was in the works by way of the referendum and provide facts related to the hotels and the process of the referendum.”

The Registrar has 30 days to complete verification of signatures and if it finds enough voters approve the petition, the city has two choices. It can repeal the ordinance, or it can place the referendum on the ballot for voter approval in an election. A special election would be funded by the city’s general fund and cost from $200,000 to $400,000 and would most likely be held in November. A general election in November 2020 would cost about $70,000.

The business development and tourism growth components of the city’s Economic Blueprint played a significant role in deciding on the change in zoning, Turner said. The city’s “long-term” view sees expanding Silicon Valley companies needing more hotel rooms to accommodate business travelers. With the future growth of South Valley as a tourism destination for wine tasting and other recreation opportunities, visitors will also require hotel rooms.

A study done by a professional analysis company estimated that, based on hotels of comparable size with current market conditions, the city will make as much as an additional $800,000 in transient occupancy tax money from the two new hotels if they are built, Turner said.

“Because you have someone coming in to build and operate those hotels, and financing institutions who are willing to let that happen, that’s showing that the market can bear two new hotels, even though they’re of similar type to the other hotels that we have,” she said.

Panwala questions the city’s optimistic view, believing the market’s needs for business and tourism customers won’t support all the hotels in Morgan Hill and there will be a glut of rooms.

With a TOT of 11 percent in Morgan Hill, the two new hotels would need to produce a little less than $8 million in revenue to achieve the $800,000 transit tax. The extra competition might lower room rates, impacting the TOC, he said.

“It makes us more vulnerable because we are a spill-over market,” he said. “When hotel rooms open up, one has to wonder if people will travel south. And the problem with the way this plan is working is, we’re relying on demand being generated north of us hoping that demand is unmet, and we’re going to build a lot of hotels here.”