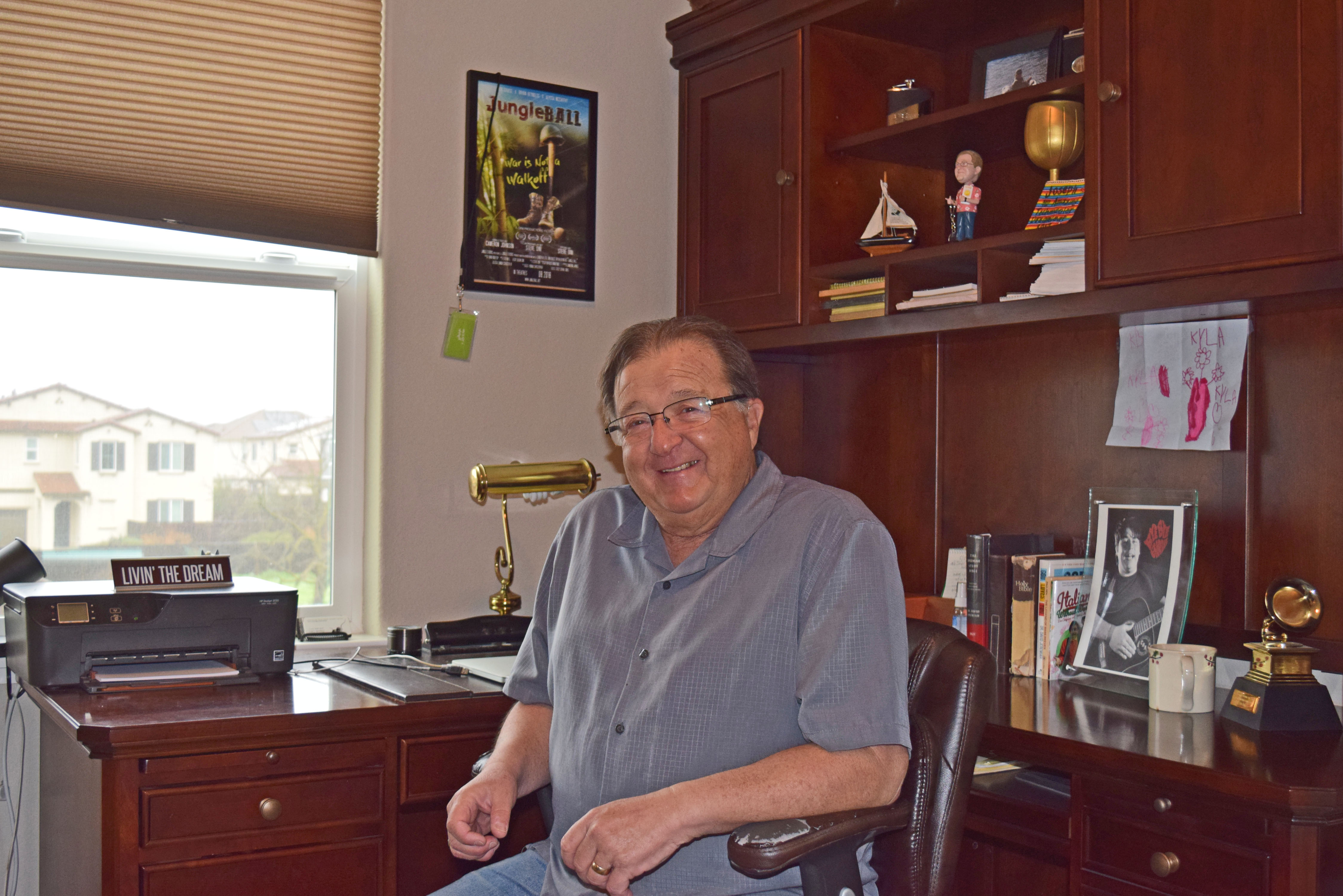 Photo by Robert Airoldi
Morgan Hill resident Steve Dini submitted his screenplay “JungleBall” to Hollywood in hopes of his story becoming a movie.

For many veterans, their battles continue long after they return home. Steve Dini, a Morgan Hill resident who served in Vietnam, found a positive way to deal with his wartime experiences.

The Army veteran, who is also a familiar presence in Bay Area radio and television, took to his keyboard to lay his memories to rest. His script, “JungleBall”, tells his story of playing fast-pitch softball during the final days of the Vietnam War. Not only was it a therapeutic undertaking, but it’s also gained the recognition of Hollywood through various screenwriting competitions Dini has entered.

“I hope somebody looks at this and says there’s a human story,” Dini said of his script. “It’s a soldier movie, not a war movie. The war was going on inside our heads. The war was being fought at home in hearts and minds.”

At a recent “pitchfest,” which is like a speed dating event for screenplays, “JungleBall” received a positive response from 17 of the 24 industry insiders Dini visited. It was also named to The Script Mechanic’s 2018 “lug nut list,” which includes the top 10 scripts he evaluated. So far, Dini is still waiting for that big break. But he’s not discouraged.

“This business can be brutal,” he admitted. “Someone told me that Hollywood is always in a hurry, but nothing seems to get done. But there has been a lot of positive feedback. Getting a script read is like winning the lottery. But if you want to win the lottery, you have to buy lottery tickets. So, I’ve been trying to keep the script floating as long as possible.”

Unfortunately, Hollywood has fickle taste when it comes to subject matter, so getting a project green-lighted is an arduous process. Every overnight success usually follows a long road of rejections. That’s just the nature of writing.

But Dini believes that although his script isn’t enjoying flavor of the month status right now, the pendulum will eventually swing back his way.

One producer who read “JungleBall” told Dini, “It’s not about combat.” And it’s not. Dini added, “These guys sought redemption by playing a game that reminded them of home, back in Willow Glen, playing in a park, three games a day.”

Like Dini, the story’s main character, Kevin, is a military police officer who grew up in San Jose and attended San Jose State University. Dini distinctly remembers the way he and his fellow vets were greeted when they came home, in contrast to those who served more recently. 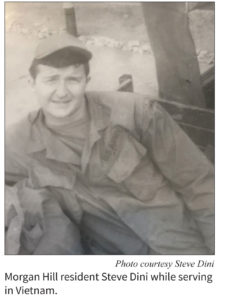 “Those guys who went to Iraq and Afghanistan are like heroes. At the end of 1970, I came back to a pretty vicious response. We had to change flights in Hawaii. When we were walking through the airport, wearing our khakis, people on the balcony started yelling ‘Baby killers,’ and spitting on us.” On his way home, he stopped at a gas station to change out of his uniform because, “I didn’t want to be identified as a soldier.”

There are many in South Valley who likely understand Dini’s experience and share his emotional struggle. Both Morgan Hill and Gilroy have higher concentrations of Vietnam veterans among their populations than the national average. And of the veterans who reside in both cities, those who served in Vietnam greatly outnumber those who served in other wars or conflicts.

While in Vietnam, Dini was exposed to Agent Orange, and subsequently developed Type 2 diabetes. He also wears hearing aids, necessitated by exposure to explosions and gunfire while he served.

These physical ailments are common among Vietnam veterans, but so are mental health issues that veterans of Dini’s era didn’t openly discuss. Those include anxiety, depression, PTSD, and other conditions, which can drastically derail a veteran’s life, even with a supportive family and friends.

Dini was fortunate. He enjoyed a successful career in Bay Area radio and television, although he joked he “got fired a bunch of times,” due to the industry’s revolving door. But he went on to teach drama at Pioneer High School, recently retiring after 25 years. Writing “JungleBall” was a cathartic journey, with somewhat surprising results.

“It took me about nine months,” he recalled. “I hired a mentor, Glenn Benest, who has written for Wes Craven. He was very helpful, and knows what Hollywood wants. Writing became more of an outlet after I came back. It was therapy for me. I was going back and recreating the world I was in. There were a lot of memories, some good, some not so good. But it was helpful to dredge up all that information. It put closure on it.”

In “JungleBall,” Kevin’s wife is named Susan, which is also the name of Dini’s wife. This August, they’ll celebrate their 50th wedding anniversary. Dini said the secret to a long marriage is spending two weeks in Hawaii every year. “She goes in June, and I go in August,” he quipped.

The couple enjoys traveling, and Dini said he’d like to visit the Vietnam Veterans Memorial, sometimes referred to as The Wall, in Washington, D.C. But he’s not quite ready yet. On a recent trip to Hawaii, with Susan, Dini had a flashback.

“That airport hasn’t changed much,” he remembered. As he walked under the balcony, where he had once been pelted by the spit and screams of angry strangers, “it all came back and washed over me, a strange, déjà vu experience.”

For Dini, writing “JungleBall” did more than tell the story of a group of softball players helicoptering from base to base to compete against other companies, including a group of Green Berets. It provided something many veterans never get: a remedy.

“A year or so after I first started submitting it, I went back and read it,” he said. “As I reread it, it seemed like someone else. I wasn’t so emotionally involved. I felt like I was healed.”

And if “JungleBall” ever gets its green light, that healing is what Dini desires for his fellow veterans. “I would like to see it made into a movie,” he said, speaking in a more serious, quiet tone. “If nothing else, to pay homage to the guys who served and who were forgotten.”