Around Town . . . with Robert Airoldi: Community members gather to spruce up downtown pop-up-park 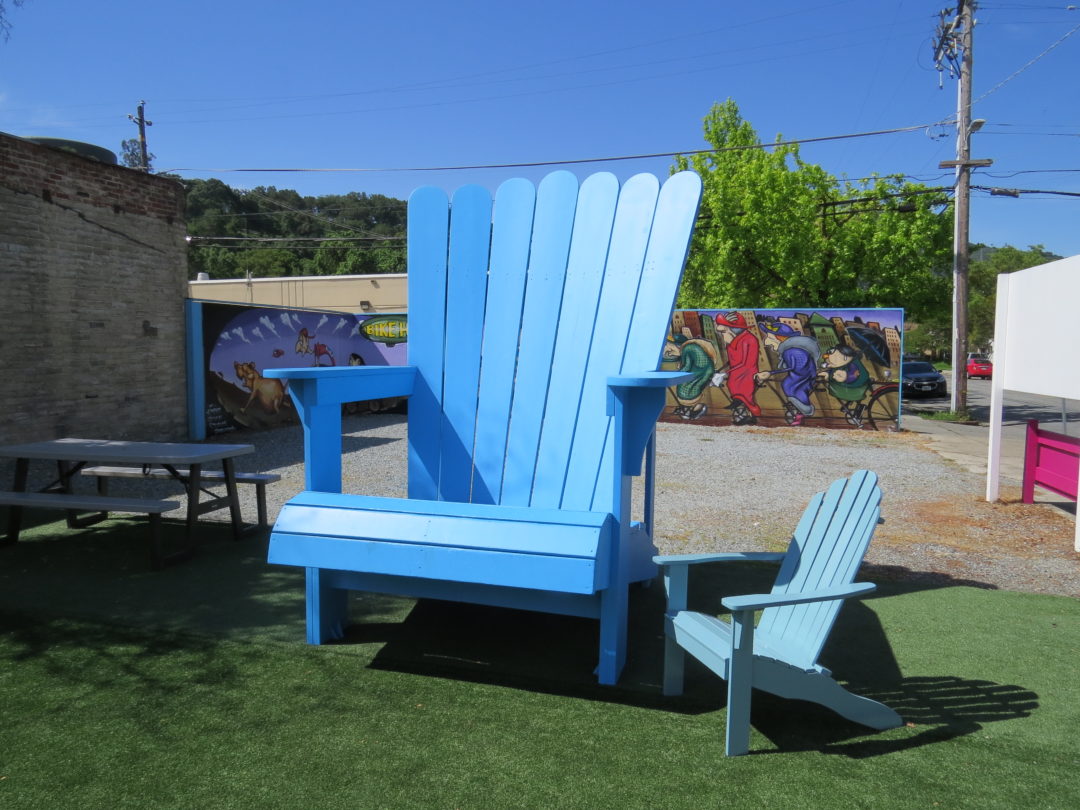 If you happened to be in downtown Morgan Hill earlier this month, you might have seen a group of dedicated citizens active at the Pop-Up Park on the corner of Second Street and Monterey Road. Residents who take pride in their community spent hours over the course of two weeks sprucing up the family-friendly play area.

Morgan Hill councilmember and Rotarian John McKay told us the park got lots of use since it was opened three years ago and was really showing the wear and tear.

“I started reaching out to community members when I got a call from Edith Ramirez stating she wanted to spruce things up in advance of an event she was working on,” he said.

The Rotary donated about $2,000 for materials such as paint and other supplies and brought in a professional painter to paint the Big Blue Chair as well as the high part of the yellow wall. The Morgan Hill Downtown Association painted the fencing and the chalkboard and included all materials to do so. Comfy new Adirondack chairs were provided by the city. They also helped prepare the fencing and chalkboard for painting. The biggest thing the city will be contributing is the ongoing maintenance of the park.

“This park is a gem in the downtown and belongs to everyone. It has become iconic with the Big Blue Chair and brightly colored chairs and surroundings,” McKay told us. “It is centrally located and offers a place where families, and people of all ages, can relax in the midst of a downtown that is being recognized regionally for its charm and success.

Still in the works for the Pop-Up Park: McKay is working on getting a piano that Rotary will likely help get delivered to the park for children and adults to try out their musical talent on. There is also discussion with a South Valley artist to put a mural on the wall over the children’s chalkboard area.

Fantastic job on cleaning up the park. It looks amazing! 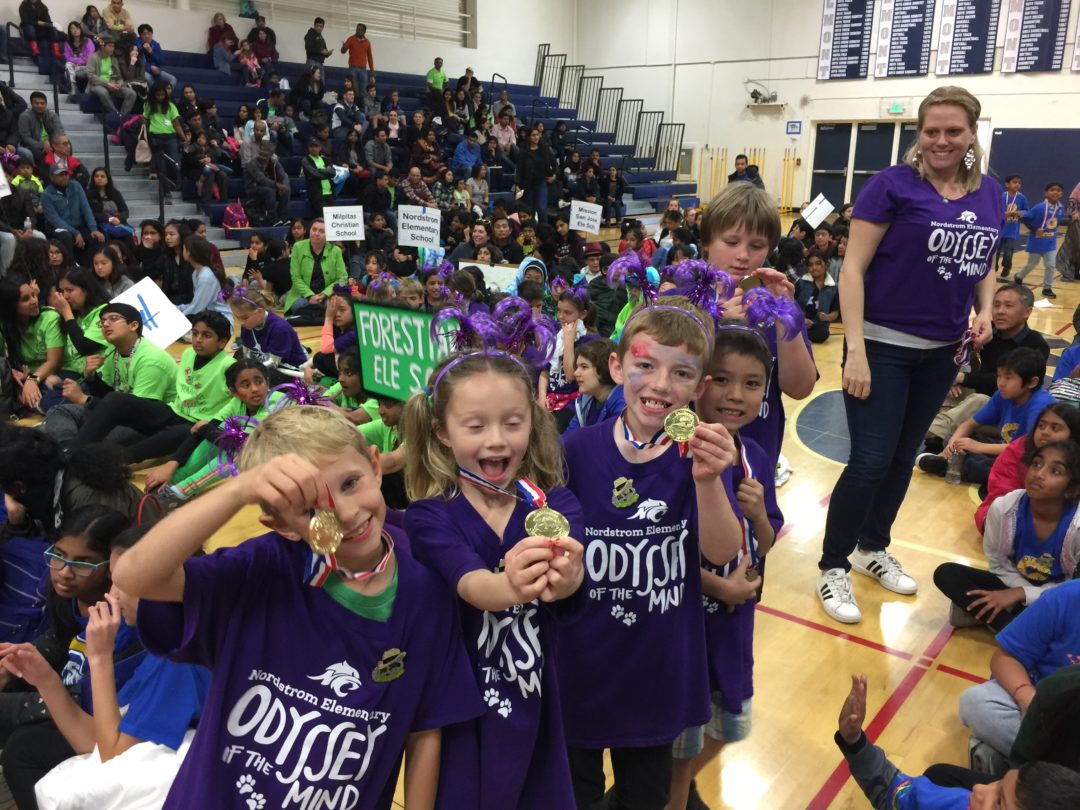 Photo courtesy Roselina WongNordstrom students ham it up with their award medals.

Roselina Wong, a first-grade teacher at Nordstrom Elementary School, shared with us an amazing experience her students had in the North Bay last month.

“Our team attended the NorCal State competition in Santa Rosa on Saturday, March 23,” she told us in an email. “The team advanced from the Silicon Valley Regional competition in early March. They competed against other Northern California state teams.”

Odyssey of the Mind began in September. Students met weekly working on solving a “problem.” The students came up with every part of their performance: script, set, costumes, acting, and all the way learning cooperation and growth mindset. Another aspect of the competition is called “spontaneous.” This entails team to do a hands-on problem or a verbal spontaneous.

Wong shared a fun video of the team inaction. (You can see it by visiting our website page: www.morganhilllife.com/around-town-nordstrom-elementary-school-shine-in-odyssey-of-the-mind-competition.)

““They made up this song earlier in the day to get out their wiggles,” she said. “This was not part of the judging, it just shows how creative and spontaneous these kids are.”

We’re proud of you, Nordstrom kids. 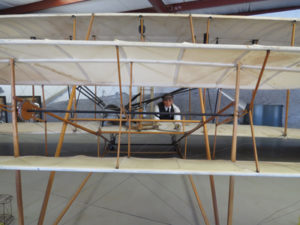 A full-scale replica of the “Wright Flyer” is on display at the Wings of History Air Museum at the San Martin Airport. Photo by Marty Cheek

After taking a year off while the county repaved the runways, the Wings of History Air Museum has announced the 2019 Aviation Day at San Martin — a combined San Martin Airport and museum community day — is scheduled for 8 a.m. to 2:30 p.m. May 18. The event will be held at the museum and adjacent airport grounds.

The public is invited to attend with activities for the entire family. There will be antique and vintage aircraft, cars, motorcycles and tractors, tethered hot air balloon rides, games, museum tours, model airplane building, RC aircraft demonstrations and a silent auction. Food and drinks will be available from several vendors.

Sport aviation enthusiasts will have a chance to get a look at Icon Aircrafts A5 light sport aircraft. Anyone interested in Light Sport Aviation should come in and have a look at the aircraft up close and sign up for one of the demo rides. This event is sponsored by and benefits the Wings of History Air Museum, an all-volunteer nonprofit which relies on donations for all operating costs. To learn more about the show and get the latest updates on activities, visit wingsofhistory.org or visit their Facebook page. 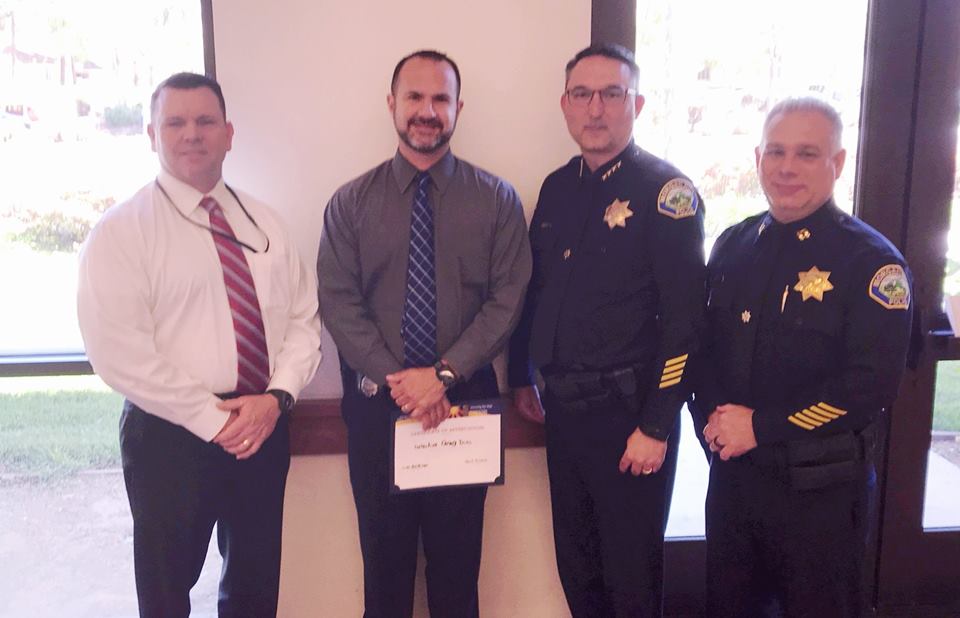 Congratulations to MHPD Det. Greg Dini, who was presented with the “Unsung Hero Award” by Community Solutions and The Victim Support Network of Santa Clara County.

The award is presented to law enforcement personnel who, through their direct and indirect efforts, provided assistance and support to victims of domestic violence and sexual assault. Chief David Swing, Capt. Emil Kokesh and Sgt. Bill Norman were able to join Greg and his family at this awards ceremony held in Campbell. “If you have had the pleasure of knowing Greg then this award will not come as a surprise,” Swing said. “We are very proud of his efforts. He is a tireless advocate for all victims of crime.”

Frank Leal broke ground last week on his major Granada Hotel project Behind the fence surrounding the property where the Downtown Mall once stood, bulldozers are now moving dirt to prep for construction. When it’s done in a couple of years, the new four-story “destination hotel” will welcome visitors to the South Valley

Can’t wait to see it finished. 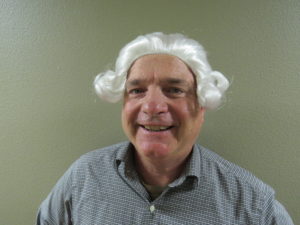 Want to take a trip back to July 4, 1776 to witness the signing of the Declaration of Independence? If you don’t have a time machine, you can do the next best thing and watch South Valley Civic Theatre’s musical “1776.” It opens April 26 for several weekends at the Morgan Hill Playhouse.  And if you see a familiar-looking guy in a white wig acting rather pompous in the show, that’s Morgan Hill Life Publisher Marty Cheek who plays the character Judge James Wilson, a delegate in Congress. He even dances.