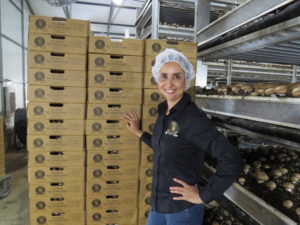 Photo by Marty Cheek
Emily Bettencourt, with Global Mushrooms, in one of the Gilroy facility’s growing rooms. Workers wear hairnets for sanitary purposes.

At this year’s Morgan Hill Mushroom Mardi Gras, visitors will find a fun new attraction. The 40th year of the festival will host a cooking competition that might eventually get the winner a six-figure check in prize money in Texas this fall.

Organizers of the festival joined with the Western Mushroom Marketing Association, the Santa Clara County Cattle Women and the California Cattle Women to host the inaugural Sanctioned Amateur Cooking Contest. Four contestants have been selected based on their submission of a recipe and photo of a blended beef and mushroom burger. They will prepare their burgers in front of an audience. The winning chef will receive a “golden ticket” to go to Dallas in October to show-off his or her culinary skills in the World Food Championships. This contest has the biggest payout in food sport history — a $350,000 prize purse for various cooking categories. The overall winner receives $100,000. 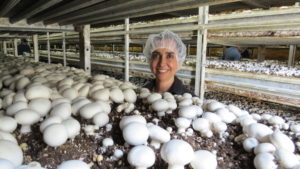 The Mushroom Mardi Gras contest came about when Emily Bettencourt took a trip last September to the Mushroom Festival in Kennett Square, Penn., a town of about 6,000 that bills itself as “The Mushroom Capital of the World.” She works for Global Mushrooms and Del Fresh Produce in Gilroy — and in December joined the national Mushroom Council, run by the Department of Agriculture to promote mushrooms among consumers.

“They had a cooking contest sanctioned by the World Food Championships,” she said of the Kennett Square festival. “When I came back, I discussed doing it in Morgan Hill with the Mardi Gras. The Mushroom Council encouraged them to do it.” 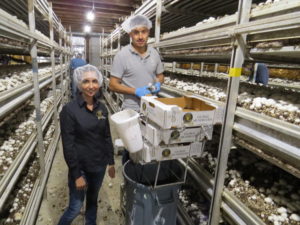 Photo by Marty Cheek
Emily Bettencourt and Miguel Vargas, a picker who has been with Global since 2011.

After a meeting with Sunday Minnich, the executive director of the Mushroom Mardi Gras, the local festival decided to have its own contest to entertain visitors with culinary skills.

Bettencourt loves teaching people about the benefits of mushrooms. Look for her educational booth at this year’s Morgan Hill Mushroom Mardi Gras inside the Community Center where she gives advice on the nutritional benefits of the vegetable, a good source of vitamin D and the B vitamins. And for folks who want to learn about the local history of our region’s mushroom industry, she’ll be giving a talk to the Morgan Hill Historical Society about how the South Valley became the place in California for growing the fun fungi. The free lecture is open to the public and will be held 10 a.m. Saturday, June 1, at the Hiram Morgan Hill House at Villa Mira Monte. 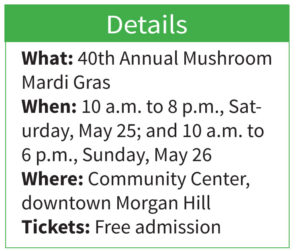 Half a century ago, the South Valley region had a number of chicken ranches for egg and poultry meat production. In the 1960s, the local ag economy changed and many the chicken coops were converted by farmers into growing houses for mushrooms. The chicken manure provided the perfect growing conditions for spores to become the delicious and versatile vegetable.

Most people might believe with the Gilroy Garlic Festival’s world-wide fame that the odorous herb is the prominent crop of the South Valley. But with nearly $75 million in annual Santa Clara County sales, according to the 2017 Santa Clara County crop report, mushrooms dwarf garlic’s $6.5 million sales.

Global Mushrooms was built in 2000 by the Chiala family of farmers. Nearly 100 workers prepare the compost or plant and pick white, crimini and portabella mushrooms in 28 growing rooms. In the dark and cool of these climate-controlled environments, the spores grow into commercial-grade mushrooms on layer after layer of shelves holding moist compost. This “Dutch system” of mushroom farms is more environmentally friendly and cleaner than previous methods, Bettencourt said.

“Global was the last mushroom farm built in Santa Clara County so it’s actually the most modern of the mushroom farms here,” she said.

Mushrooms are popular in the culinary world right now. The New York Times named them the “It” vegetable for 2019 in its trend forecast. And Outside magazine named “humble mushrooms” a top fitness food for athletes and people living a healthy lifestyle because they meet three criteria –  sustainable foods, functional foods and plant-forward eating. In many restaurants, the vegetable turns up as “burger blends” on menus.

Bettencourt believes serving on the national Mushroom Council’s board is important for South Valley because the prestigious position brings wide-spread attention to the mushroom industry here. The position  keeps her busy. The government-sponsored group has a yearly budget of about $6 million that are assessments per pound paid by every mushroom grower across America, she said.

“The farms here have a unique niche in the Bay Area market where many people are health conscious and love eating mushrooms,” she said. “Several of the nation’s top media outlets have reported mushrooms are the trending vegetable for 2019. I want people to buy mushrooms from our South Valley farms.”

The Mushroom Mardi Gras plays a part in that marketing.  Bettencourt has used the feedback she received over the years while talking to people at the  education display, she said. Visitors can even taste a bite of this year’s sample she’ll be handing out: a blended beef and mushroom 50-50 taco filling. And of course, they can pick up a recipe tip or two from her and find new ways to prepare the fascinating fungi.

“In 22 years, I’ve cooked a lot of mushrooms,” she said. “When my son was  younger and involved in sports and activities, there were always the barbecues where I brought mushrooms to get people to try them or try mushrooms in a different way. I was always doing marketing.”