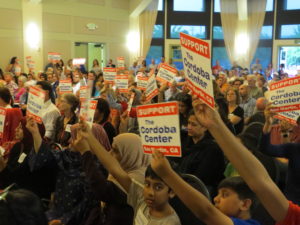 In front of am audience made up mostly of supporters for the project, the commission held back the item for 90 days,  requesting a scaled-down version of the mosque and community center the South Valley Islamic Community seeks to build in San Martin be submitted for the Aug. 22 meeting.

At the May 23 meeting the Santa Clara County Planning Commission, in a 4-3 vote, approved the land use and cemetery permits. However, they asked the South Valley Islamic Community to revise their plans to significantly reduce the size of the mosque and community center, said Hamdy Abbas, a SVIC board member and spokesperson. The proposed cemetery was approved for 3,000 graves.

The planning commissioners who voted against the original plan for the project are Bob Levy, Kathy Schmidt, Erin Gil and Vicki Moore. They argued the size of the proposed facilities at the Cordoba Center were too large and did not abide with the county’s general plan for rural areas. There have been many years of delays after the 15.8-acre property was purchased in 2006. An extensively detailed 610-page environmental impact report was submitted to the county and approved unanimously.

Supporters were upset by the commission’s new conditions.

“They are in Contradiction to themselves and their staff, because the staff did give the recommendation for the commission to approve the entire thing as it was submitted,” Abbass said.

The four commissioners who voted for a scaled-down version of the project made the argument that they supported a mosque and cemetery on the site but feared approving the larger-scale construction in rural residential zoning might encourage the development of larger projects in San Martin. Those commissioners did not listen to the Planning Commission staff, which recommended approving the application as originally submitted, Abbass said.

The SVIC board is now consulting its lawyers and project managers to determine how to proceed. They might decide to reject the commissioners demand for down-sizing and insist the project be approved as submitted, Abbass said.

“I really don’t know what we are going to do yet. It’s too early to give that assumption at this time,” he said.

At the meeting, the Cordoba Project had much support from people of various religions as well as concerned citizens, Abbass said.

“It was just a roomful. I would say 90 percent if not more were in support, whether they are from our own community, from the interfaith community, from the community at large, and from Santa Clara County at large,” he said. “There were maybe six or seven people who talked against the plan, nothing that was based on any facts, just emotional things.”

Commission Vice Chair Marc Rauser lives within a mile of the Cordoba Center site and voted to approve the project as originally submitted. He spent about 15 minutes asking detailed questions from the environmental experts on keeping ground water safe from potential biological contamination from the cemetery, a contentious issue for some San Martin residents. The SVIC agreed to a requirement by the county to conduct testing of the ground water on a regular basis.

“We don’t want to have any impact on the community at large,” Abbass said.

The South Valley Islamic Community has for many years worshipped in a converted barn in San Martin. It has about 100 families as members. About 300 people use the site, Abbass estimated, but they don’t all come at the same time because of its small size.

Building the Cordoba Center is important for the SVIC because other mosques in the region are long drives for members, he said.

“We’re asking for our house of worship, for our First Amendment right to practice our religion freely in our area,” he said. “There is no mosque in our area for us to practice.”

The project received unanimous approval of the Santa Clara County Planning Commission and the County Board of Supervisors in 2012. After that, opponents sued the county on the basis that the project would damage the environment. SVIC decided to avoid a lengthy legal battle and relinquished its entitlements at that time.