Take a Hike . . . with Mike Monroe: Enjoy the fall colors and oak trees on a walk along Llagas Creek 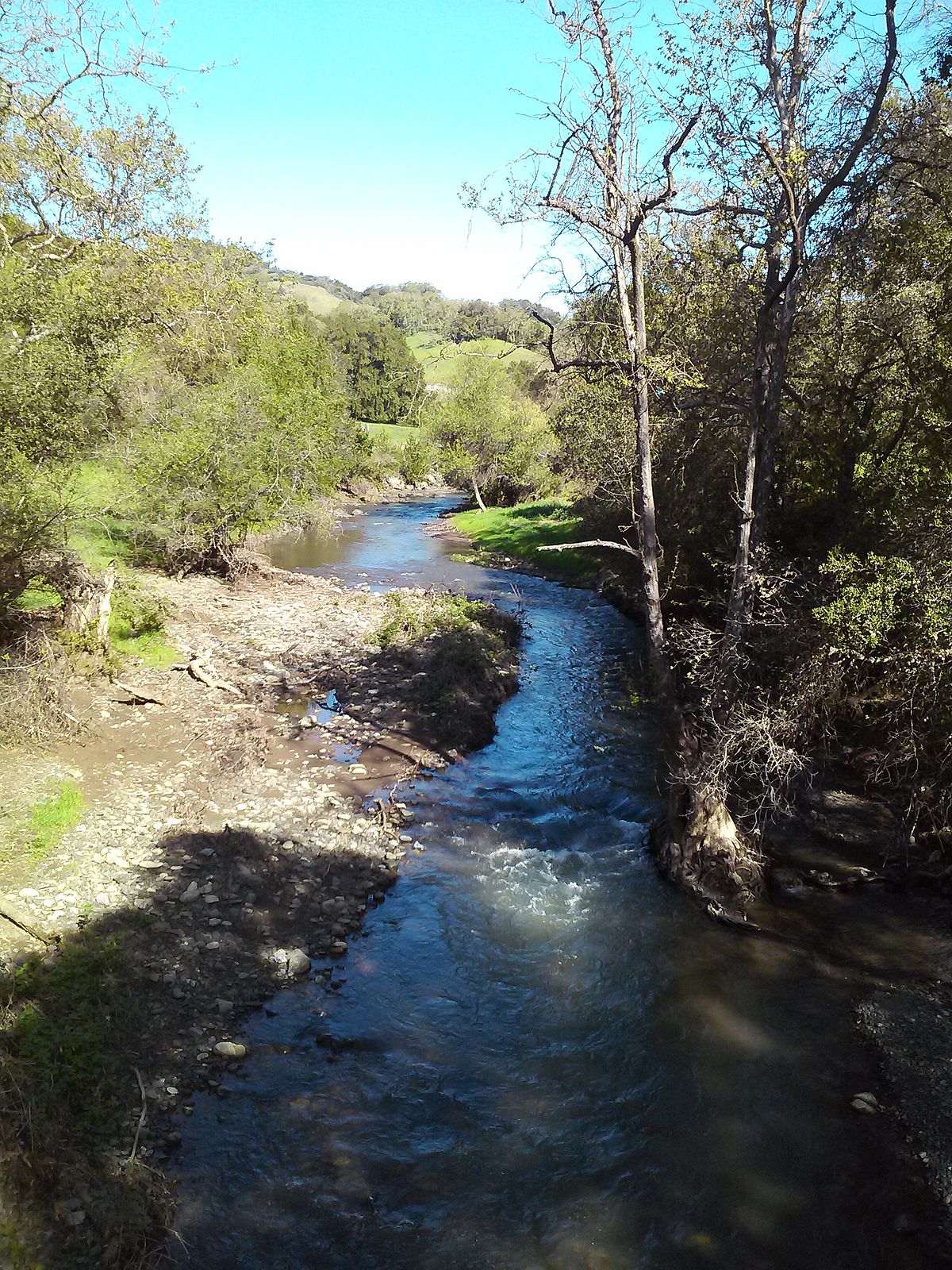 All of nature’s seasons are amazing and intended for our enjoyment. Do you have a favorite time of year? Maybe it’s the slower pace of winter when the temperatures cool and the gentle rains return  refreshing the earth. Springtime and early summer are full of energy as the new plant growth vigorously kicks in and our hillsides are green and in bloom for a time. 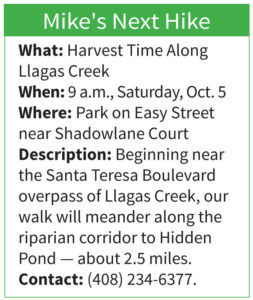 For me, the hot days of late July into early September cause me to be thankful for our proximity to the coast and the redwood forests. Year after year, though, it is the unique feeling of autumn that most resonates within me. The days grow shorter, the changing sun angle strikes the landscape in wonderful ways, and the air has a fragrance that is crisp and heavy.

Maybe it’s the cycle of the seasons that bring so much joy to gardeners.  I’ve  been observing my pumpkins as the young plants initially were growing by leaps and bounds, and then, after a pause, the gears were switched to nourish the baby gourds. The big floppy leaves were assigned the task of protecting the small, green fruit from the sun. This pattern is true for most plants as growth commands most of the resources early, then the innate determination to reproduce shifts focus to the fruits. Sometimes the reproductive effort results in an overabundance of fruit. In the case of oak trees, there are years when the acorn crop is intentionally so large the acorn consumers are actually satiated and there are acorns left on the ground to start new saplings.

These super production years are called “mast” years and scientists are unsure what causes them. Maybe the weather, maybe too few or too many consumers — it’s one of Mother Nature’s secrets. California black walnut trees have mast years, and raspberries and blueberries do, too. While we don’t concern ourselves these days about the size of the annual acorn crop, for thousands of years the indigenous populations relied on acorns as a staple of their diet. Prior to introduction of non-native plants and animals, and before the endless land conversions, Santa Clara Valley was dominated by three species of oak trees — the Coast, the Valley and, to lesser extent, the California black oaks which produced acorns that were sweet to the taste and did not require as much leaching to remove tannins. The most prized acorns were from the Tanbark oak, a cousin because of its fuzzy cap. It was preferred because after the acorns were ground the flour was a pleasing white color.

Our stroll will take us by very old walnut trees mixed in with a few majestic valley and coast live oaks. Trying to guess their age makes me wonder if they were around when Spanish soldiers and priests stopped here as a resting place on their way north. Most likely, in those days, Llagas Creek was not confined to its current channel, offering a wider floodplain and the tree cover was more open. Today water is usually present year round due to consistent releases from Chesbro Reservoir to replenish our local aquifers. The result is a substantial vegetation density of willows and cottonwoods and invasive Himalayan blackberry.

The creekside path leading toward Monterey Road serves as the approach to a man-made pond locals refer to as either Hidden Pond or Lake Silveria. Years ago, a dairyman by the name of Silveria allowed a gravel pit excavated in order to provide base rock for the construction of roadways. When the quarry was abandoned, a connection to Llagas Creek allowed the pit to be flooded and voila — a scenic pond for birds, birdwatchers and walkers. The redesigning of the lake is the topic of much discussion now as the Upper Llagas Creek Flood Protection Project moves forward. One aspect of the plan is to route West Little Llagas Creek under Watsonville Road and direct its flow into the main Llagas Creek channel. Pedestrian trails and bike pathways are in the works as well as an enhancement of the wildlife habitat zone.

Hopefully, early October will provide a chance to see fall color. Coast live oak is an evergreen variety, but the deciduous valley oak leaves do take on shades of bronze and gold. The changes in leaf colors occur as the amount of sunlight decreases which signals plants to generate cell layers that block the connection between the leaves and the branches. This blockage disrupts the flow of nutrients to the leaves and impacts the renewal of chlorophyll. Once the chlorophyll begins to fade, other chemicals in oak leaves once masked by the chlorophyll will be recognized as yellow mixed with browns. Anthocyanin is a chemical that forms as the chlorophyll dissipates and creates the red colors of the California black oaks. And the cycle of the seasons continues.

I’m sure there will be leaves to kick around as we walk along Llagas Creek. Keep on sauntering!