Editorial: Art can connect people with a message of hope for humanity 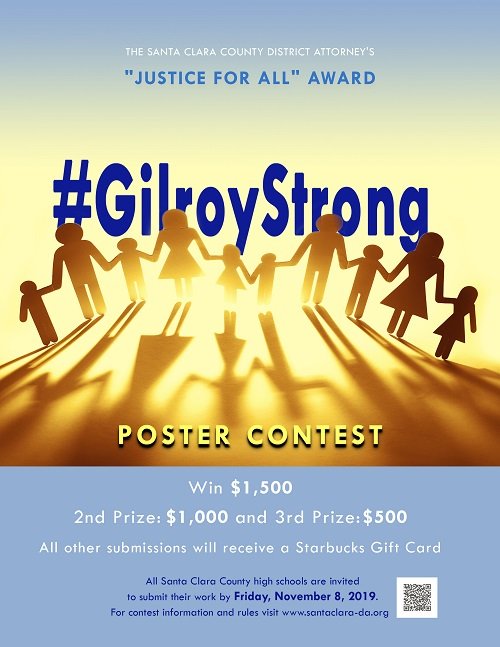 Two months ago the South Valley region was rocked by news of the Gilroy Garlic Festival becoming the site of another mass shooting in America. Immediately, the healing began with artistic endeavors depicting the message of #GilroyStrong. The art helped connect people around a message of hope for humanity. T-shirts, posters, and small painted rocks began appearing to promote a positive message to show solidarity. Musical artists shared their talent at vigils and concerts that helped in the healing.

We applaud the Santa Clara County District Attorney’s office for taking up the theme of #GilroyStrong in its annual “Justice for All” poster contest. The D.A. is asking eligible high school students in the county to create a poster illustrating the power of that message. All art mediums are welcome including paint, pencil, charcoal, and photography. The art needs to be submitted by Nov. 8 and the winners will be announced Nov. 22. The first-place winner will receive $1,500 and their work of art will be published to promote the message. For contest information and rules, visit the D.A.’s webpage by clicking here: GilroyStrong poster contest.

“The people of Gilroy refuse to be defined by tragedy,” said D.A. Jeff Rosen in a press release. “They rose up and stood together — an American community that showed us all how caring for each other is far more powerful than hatred.”

Research done by the National Institute of Justice, a division of the U.S. Department of Justice, shows there are common traits among the perpetrators of mass shooting tragedies in schools and other public places. A database called The Violence Project looked at mass shooting incidents dating back to 1966. The data provides researchers with a way to analyze the profile of the shooters and hopefully can help society find ways to deal with the problem of gun violence in America.

A vast majority of the killers — about 90 percent — are male. The average age is 34. The vast majority of them experienced early childhood trauma and exposure to violence at a young age. This might include parental suicide, physical or sexual abuse, or severe bullying. Nearly all of the mass shooters faced a crisis situation in the weeks or months leading up to the shooting. These could include workplace situation such as being fired or relationship rejection or loss. The emotions of anger and despondency triggered suicidal thinking. A third trait is that most of the shooters had studied the actions of other shooters, using that to validate their motives for gunning down people.

The shooter’s access to guns and ammunition is an obvious requirement for a mass killing event. The vast majority of people who own guns are law-abiding people with no intention to use their weapons for such a horrific carnage of human life. Gun control is a politically hot button issue, but most American see it as a necessity to keep men, women and children safe. A 2017 Gallup survey shows that 96 percent of Americans — including majorities of Democrats and Republicans — favor background checks for all gun sales. About three-fourths support a mandatory 30-day waiting period before a potential owner can legally receive a gun. And 70 percent of American hold the opinion that all privately owned gun must be registered with a law enforcement agency.

Beyond smart gun policy, there might be another option for public safety. The D.A.’s #Gilroy Strong poster contest suggests an idea that might help reduce mass shootings — the power of art to generate empathy. To turn a gun on innocent people at a food festival, movie theater or school requires the shooter to turn off the parts of the brain that can feel compassion, kindness and love for our fellow humans.

The arts — including visual arts, literature, and music — have the power to connect people. They offer hope for humanity through mediums that enable the sharing of stories. Those stories build an understanding of others. That in turn produces empathy to promote social and emotional maturity.

The decline of art appreciation and artistic expression in our schools during the past two decades due to budget cuts might have had the unintentional effect of creating a rise in gun violence in America. Encouraging our children to express their feelings and ideas through artistic mediums can stimulate empathy in their young brains. And it will help, over time, reduce gun violence in society. It’s an experiment worth trying in our schools.

Thank you for reading this editorial If you would like to let us know what you think of it, please email the editor at Editor@MorganHillLife.com.
Follow us