Editorial: Let’s protect our children from dangers of vaping 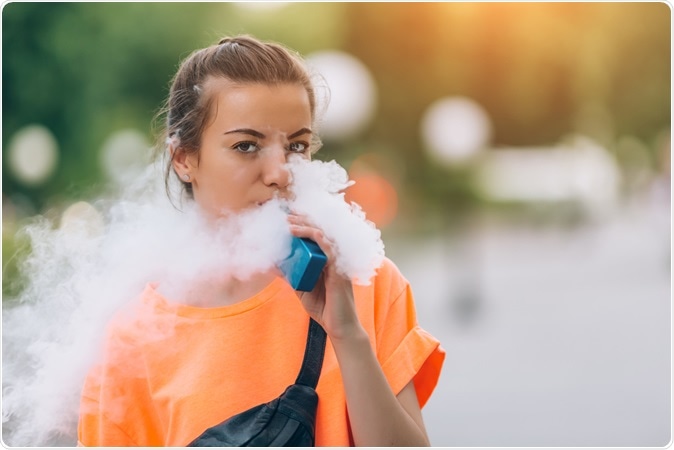 In Santa Clara County more than 13 percent of teens use e-cigarettes.

Vaping is an epidemic among America’s youth. More than 90 Californians with a history of vaping have been hospitalized for breathing problems and lung damage. Two have died. The California Department of Public Health urges people to refrain from vaping.

In Santa Clara County, it’s time to take action to protect the health of our young people from the dangers of nicotine addiction.  A report released last month shows widespread and increasing use of e-cigarettes, or vapes, among high school students in Santa Clara County and across California. More than 31 percent of teens surveyed in the county said they had tried e-cigarettes. Some of this group were already regular users of vapes despite their young age.

It is illegal in California to sell tobacco and tobacco products to anyone younger than 21. It is the responsibility of stores with tobacco licenses to ensure their employees comply with the law. Violations can include fines and the loss of a license.

Morgan Hill Police Department detectives conducted multiple tobacco operations this past summer. These operations were funded by a state grant combating youth tobacco use. Of the 18 businesses allowed to sell tobacco that were checked, about 75 percent were found to be in compliance with the law. Five businesses were issued citations and those cases are pending.

Despite what executives in the tobacco industry might say publicly, privately they know they need to entice young people to use their products. Their marketing contains designs, images and colors targeting youth under the age of 18. Their goal is to continue keeping a stream of smokers as customers. 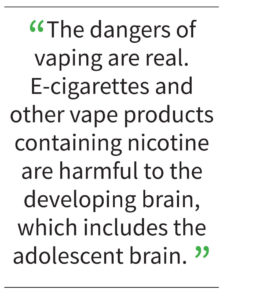 Nearly all smokers start as kids or young adults. National data show that about 95 percent of adult smokers begin smoking before they turn 21. So teens and young people are heavily targeted by the tobacco industry.

Advertising of tobacco products is heavily regulated in America. The tobacco industry spends $8.5 billion a year in marketing. The majority of this takes place in stores with the goals of seducing many children with cigarette and other product marketing behind the cash register of convenience stores, placed near the gum and candy.

Research shows that kids who visit convenience stores with tobacco marketing more than twice a week are more likely to start smoking. Many young people also obtain tobacco through websites where age gates are easily bypassed after the kids use their parent’s name for shipping.

In Santa Clara County more than 13 percent of teens in the survey currently used e-cigarettes, meaning that they reported vaping in the last month. At the same time, use of combustible cigarettes by youth in the county in the past month declined to a low of 1.4 percent. This is a decrease since 2015-2016, when a previous study of middle and high school students found that 3 percent of youth in the county used combustible cigarettes in the past month.

The survey found: More than 82 percent of teens currently using tobacco reported using a flavored product: use of flavored products was widespread across all tobacco products and all demographic categories. More than two in five teens — 45.4 percent — reported purchasing their own e-cigarettes, with more than a quarter of this group saying they buy them directly from a local store. Among those who purchased e-cigarettes in a local store, 62.5 percent purchased them at a vape shop.

The dangers of vaping are real. E-cigarettes and other vape products containing nicotine are harmful to the developing brain, which includes the adolescent brain. Nicotine changes the teen brain and affects attention, learning, and memory. It can worsen stressors already challenging in adolescence including impulsivity, learning difficulties, irritability, anxiety, and mood swings. Among teenagers, changes to the brain from nicotine can be permanent.

In Santa Clara County, one in eight deaths annually is attributed to smoking, including smoking-related deaths due to cancer, heart disease, and respiratory diseases. Tobacco use also carries a hefty price tag, both in the annual cost of $689 million in Santa Clara County, and impacts on families due to preventable diseases.

We must empower young people to make positive choices for themselves and their physical and mental health. If we fail to do that, the high toll from tobacco use will negatively impact their future.