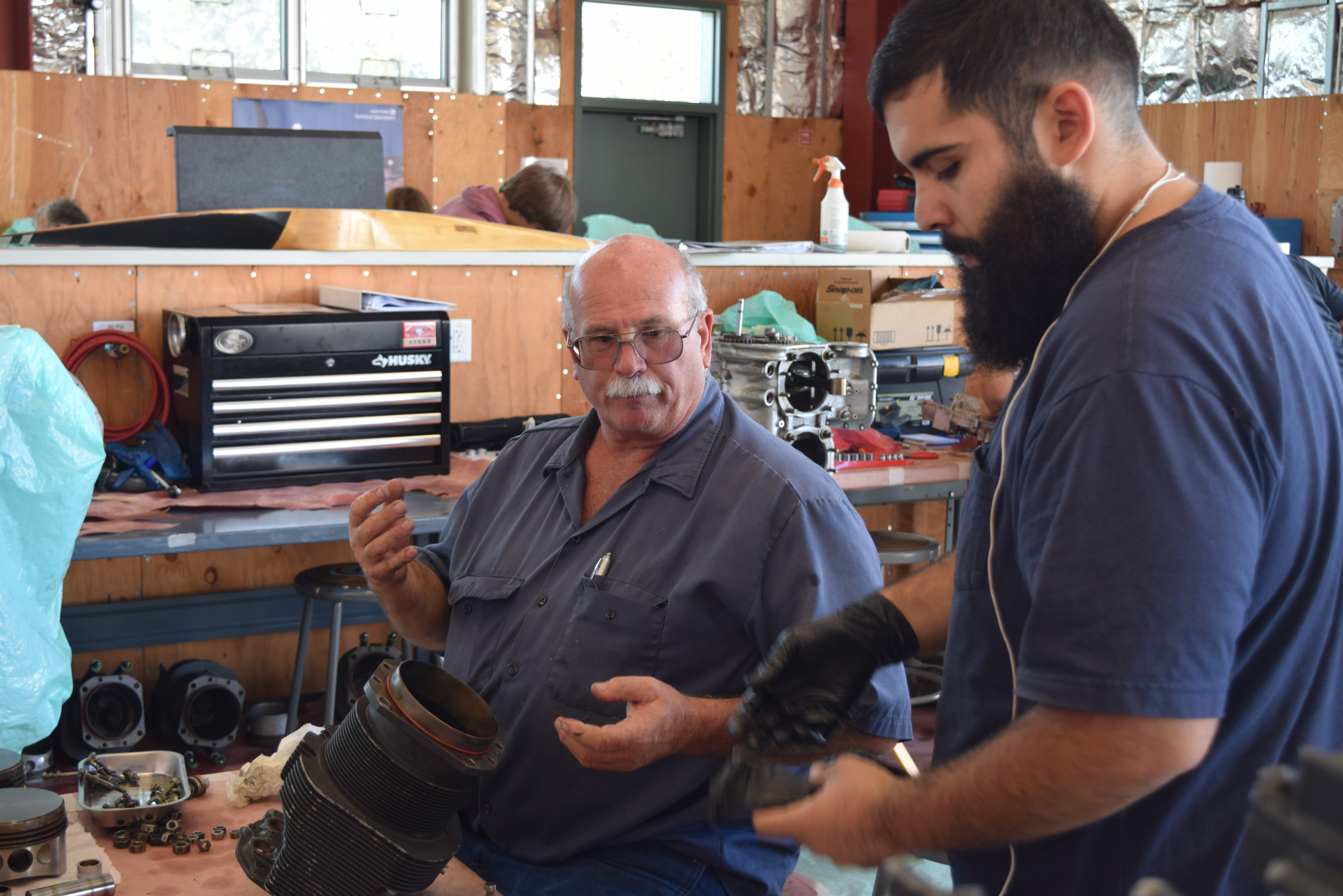 One of the gems of Silicon Valley’s education sector isn’t nestled among the weathered texts of a wood-paneled library or veiled in a whiz-bang computer lab tricked out with all the high-tech trimmings. It’s found in a couple of hangars and portable classrooms at the San Martin County Airport.

Gavilan College’s Aviation Maintenance Technology curriculum is accredited by the Federal Aviation Administration. It’s producing skilled, in-demand technicians who can earn upward of $72,000 annually, straight out of the two-year program. Graduates find themselves in the cockpit when it comes to employment options and job security. Work is plentiful, compensation is generous, and there aren’t enough candidates to fill positions.

Gavilan’s aviation program began in the 1960s. Until three years ago, it was located at the Hollister Airport. Herb Spenner and Paul Agaliotis, both retired and on their second careers, run the program with aviation departmental assistant Deborah Santos. Both men are also program alumni.

“I graduated from Live Oak High School in 1976 and attended this program from 1976 to 1978, while it was still in Hollister,” Agaliotis said. He went on to work for United Airlines for 30 years. 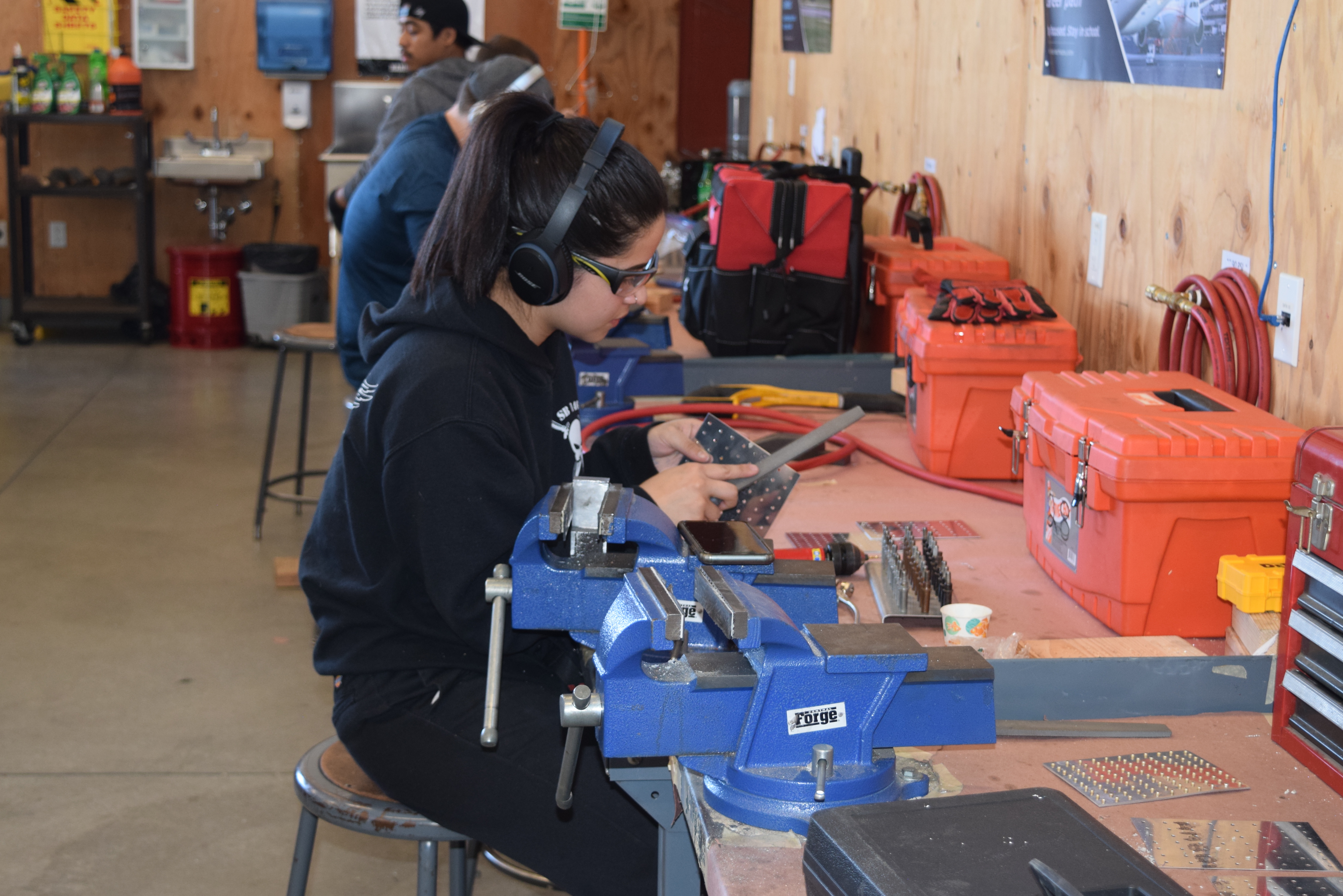 As they always do, times changed. Silicon Valley’s orchards were swallowed by semiconductor plants, its rolling hills sacrificed to the pursuit of unimaginable high-tech riches. That left many with valuable vocational skills to look for work elsewhere.

“The aviation industry for many years hired Vietnam veterans,” Spenner said. “They handled this kind of work. But there was no one trained to take over. The military isn’t pumping out mechanics like they used to.”

The pool of qualified aviation mechanics is shrinking from two directions due to industry growth and the retirement of that Vietnam era generation, he said.

“Paul represents what our students are replacing,” Spenner said. 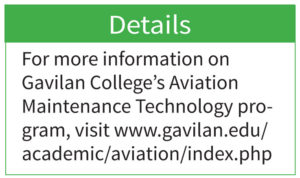 Agaliotis came full circle by returning to Gavilan as an instructor in 2016. Spenner, an electrical engineer with experience in military avionics, retired early from banking. When he wanted to build his own plane, he checked out Gavilan’s program “to see the civilian side.” Now he’s an instructor, helping the next generation break into the industry with a methodical curriculum and valuable hands-on training.

“One thing unique about us is that we try to integrate topics and link together the learning that takes place,” Spenner said. For example, when general instruction is focused on electrical systems, it coincides with the students learning electrical systems in the airframe course. This creates an overlap that reinforces learning and helps students better grasp the concepts and applications the program teaches.

After completing the first year, with 400 hours in general and 750 hours in airframe, students are qualified for testing to become certified airframe mechanics. After the second year, having completed 750 hours of power plant instruction, they’re qualified to test for that certification.

Classes are comprised of men and women, and a variety of ages — from straight out of high school to young military veterans to what Spenner jokingly refers to “old fogeys,” or retirees who own planes and want to learn how they work. But regardless of gender or age, it takes a special mindset to complete this program. 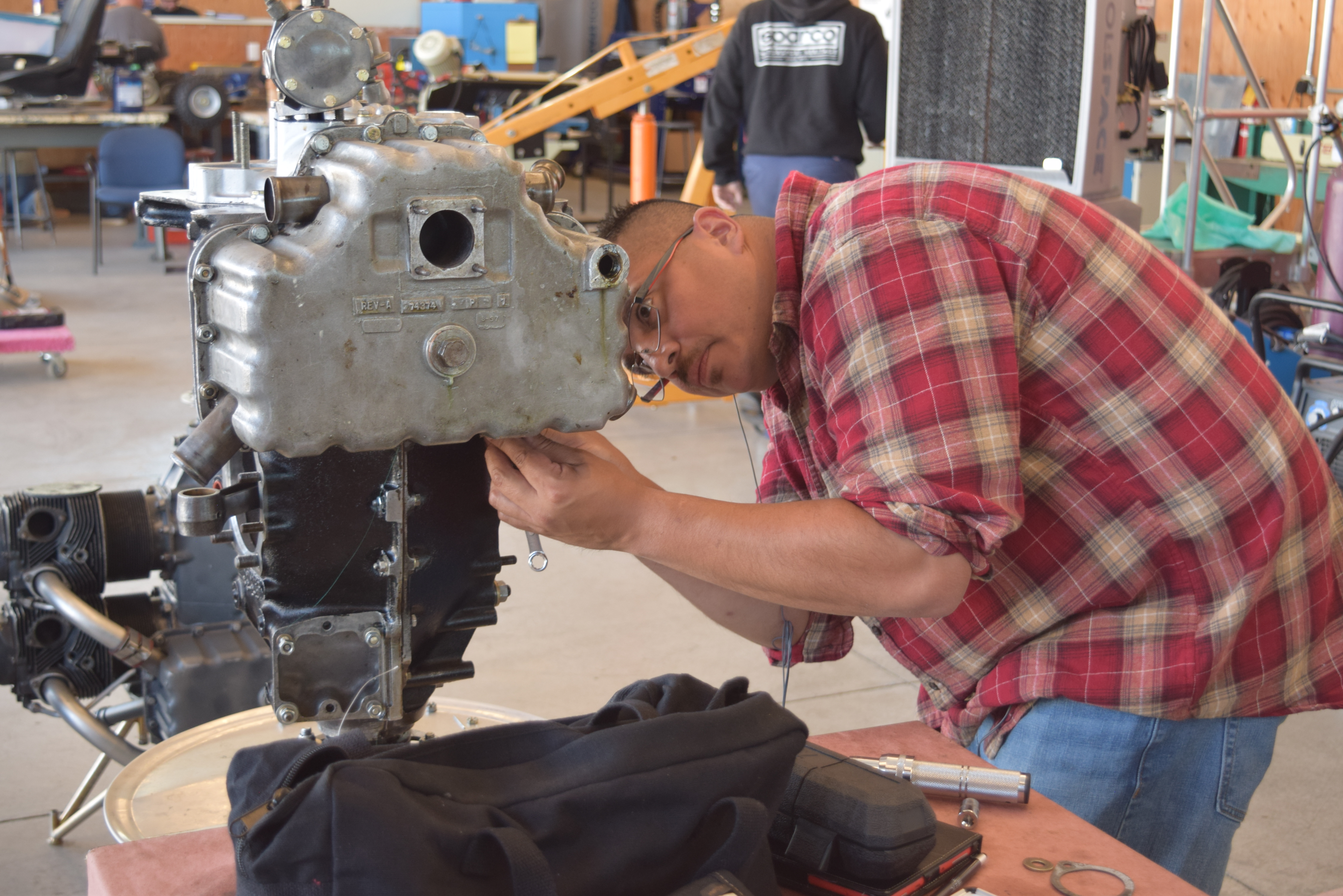 Photo by Robert Airoldi
Salinas resident Esthefani Montelon prepares the skin of an engine for riveting.

“Within the first week, we lose about 15 percent,” Spenner noted. “Some decide it’s more than they can commit to, or the program isn’t a good fit. It’s overwhelming for a lot of students. Another 10 to 15 percent drop before the end of the first semester. But after they’ve committed to the first semester, the completion rate is nearly 100 percent.”

Spenner teaches airframe, while Agaliotis teaches power plant. Classes are a mix of lecture and hands-on labs. That means taking apart actual planes, putting them back together, and testing them. There are portable classrooms, as well as a large hangar for instruction. Another hangar houses materials, which includes engines, instruments, and the like. They hope to add more buildings over time.

“On a rainy day, we might roll a plane in here to work on,” Spenner said of the hangar where students work together and individually on various projects. “Because we’re limited in size, the building morphs. We rotate planes in and out. We might do general repairs. One plane we take fully apart and put it back together. That’s called rigging. The wings come off, we do the brakes, all of it, measure it to 1/10,000th of an inch, put it on a test stand and run it.”

Everyone has something to do, partly because the program is so varied, and partly because, due to FAA regulations, it’s limited to 25 students. In fact, there’s now a waiting list. And Gavilan can’t turn out graduates fast enough to meet the demand of the aviation industry.

“The college has been patient with this program, invested in it, and now the market is ready,” Spenner said.

Agaliotis agreed. “Gavilan positioned its school resources well, and through forethought or serendipity, we now have a state-of-the-art facility.”

But what if, after two years, a student decides that aviation maintenance isn’t their desired career?

“What’s nice about our course is that after four semesters, if you don’t want to do airplanes, there are lots of transferable skills,” Agaliotis said. ” Like precision measuring. BART will take aircraft-trained mechanics prior to someone off the street. These are valuable and marketable skills.”

Besides, he added, “It’s the best kept secret in Santa Clara County.”