Your Estate  . . . with James Ward: When making a gift, should it be done before your death – or after?

When you’re planning your gifts, talk to an expert first 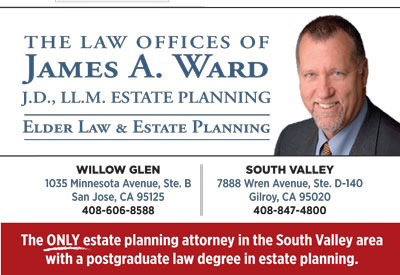 If you’re planning to make a gift or leave something to someone after your death, think about the value you’re giving, whether it’s real estate (Prop 13?), stocks, cash, or IRA/401k.

Who are you giving it to? I recently had a new client who couldn’t come to see me because his wife was failing fast in the hospital, and then she died. The old trust done years ago was a mess, but my client was very clear about his wife’s wishes, and he wanted to respect those wishes.

If you leave something to your daughter, and she later gets divorced, we can go back via “tracing” and show that that money or property was hers before she comingled it as joint property with her husband. This puts a “line in the sand” to establish the property as her sole and separate property at some point in time. Even if a divorce court grants a portion to the husband, it will generally only be a portion of the increase in value after the initial gift. 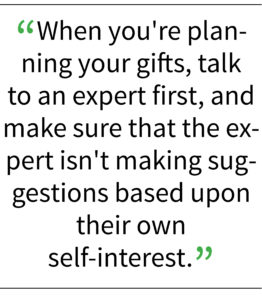 I saw this previously in another family where the son-in-law convinced his wife’s parents that they needed to gift the house to him and their daughter to get the father on Medi-Cal. This was not true then, and it is not true now, but the wife’s parents had made the gift at the urging of their son-in-law, so half of the million dollar property became his at the moment of the gift. If the young couple ever gets divorced, the son-in-law gets half of the property. That wasn’t what the parents wanted.

Don’t let these things happen in your family.

I have another case now where the daughter wants to sell her mother’s house before the mother dies, but this will cause them to owe about $600,000 in capital gains tax. Yes, that’s a huge amount of tax, but it’s an expensive home with a lot of gain from when they built it in the 1950s. The mother is currently in the nursing home and may not live much longer, so why sell now and pay $600,000 in tax?

If the house is sold after the mother’s death, they won’t pay that tax. Yes, they’ll save about $600,000. If they need money now, we have other solutions to get some money before the mother passes.

People generally want to leave something to their family, friends, or a charity or two, but think it through before making the gift. Should it be done before your death? After? Will you need that money if you’re ill? What are the tax consequences of giving it now as opposed to giving it at death?

When you’re planning your gifts, talk to an expert first, and make sure that the expert isn’t making suggestions based upon their own self-interest.