Morgan Hill students have fun learning about science at 2020 fair

About 75 experiments were exhibited in physics, engineering, math, biology and chemistry 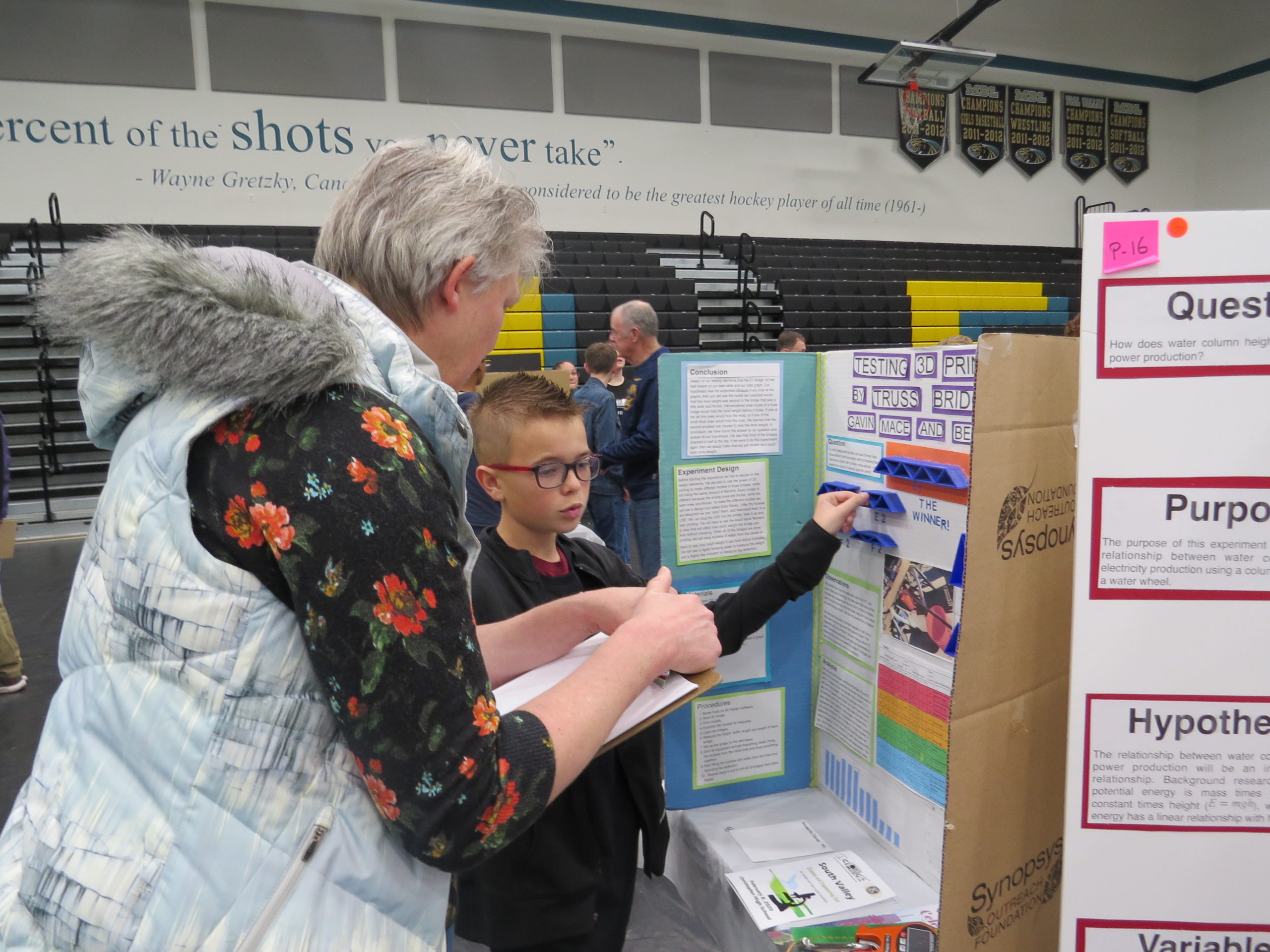 Solorsano Middle School 8th-grader Aryan Ganesh set a goal for himself to one day find a way using natural ingredients to prevent and even cure cancer. At the South Valley Science and Engineering Fair held Feb. 8 at Christopher High School in Gilroy, he showed he might be on the path to achieving his dream.

The 11-year-old Gilroy resident’s project was titled “Study and Comparison of Effects of Different Natural Products that Can Cure or Prevent Cancer Using Drosophila Model.”

Using various herbs including cinnamon, sesame seeds, moringa and (this being Gilroy) garlic, he gave dosages to wild flies larvae. He determined which adult flies had cancer by looking through a high-powered microscope and noting a blurriness in their eyes. The flies that had the least cancer rate were those exposed to a combination of moringa and sesame seeds, he discovered.

“I tried to cure cancer but I couldn’t,” Ganesh said. “And also, I knew that these natural products are painless. When you eat them, they might be disgusting, but they’re better than going through chemotherapy.”

The mothers of two of his friends had died of cancer. They had undergone the pain of chemotherapy. That inspired him to enter a project in the SVSEF, an experiment with natural ingredients that might serve as an alternative treatment.

His efforts won him a first-place trophy in the middle school biology category.

“I wanted to enter this science fair because my friend wanted to get into the fair but his mother died,” Ganesh said. “I could show him, I won this trophy, it’s all because of you.”

Gilroy resident Ernie Olivares, a member of the science fair committee, was glad to see Christopher High School playing host to the event, which was held in the large gym. About 75 projects were exhibited in physics, engineering, math, chemistry, and biology categories. Six projects were entered by Gilroy students and the others came from Morgan Hill public schools as well as Oakwood School.

“They call it the South Valley Science and Engineering Fair and Gilroy is an integral part of that community,” he said. “And over the last couple of years, they’ve struggled to get the Gilroy students involved and participating by entering projects to the fair. One idea was to change on an alternating basis the location from Morgan Hill to Gilroy. So this is a great exposure to            Gilroy.”

Olivares sees the SVSEF as an opportunity for students to learn about the scientific method to sharpen their critical thinking skills.

Taking a tour of the various projects and chatting with the students, he was impressed with their knowledge and level of research. He wants to see it grow to 20 projects from Gilroy students next year and believes encouraging more parental involvement will make that goal achievable.

“Especially at the middle school age, the parental support and involvement in building the project and directing and guiding the student is critical,” he said. “Their support is definitely an important part of the process.”

Lydia Sattler, an 11th-grade Oakwood student and San Martin resident, won first place in the high school biology category with her fair project titled “A Comparative Analysis of Llagas Creek Soil.” Seeing the creek flood in winter, she wondered if the water added to the soil’s quality to promote plant growth.

“I did an experiment that examines the quality along the Llagas Creek soil at different elevations and locations to determine any influencing factors and variations of soil quality,” she said.

Sattler’s hypothesis was that soil closest to the creek would be more fertile — more nutritious with growth-producing substances plants need — compared to the soil farther away. She took nine soil samples along the creek and on top of the hill, digging a foot deep to get an accurate representation. Then in the experiment she used a chemical test kit for Ph levels, potassium, phosphorus and nitrogen levels.

She found her hypothesis was incorrect. “The results showed soil closest to the creek were less nutritious because of the leeching of the water,” she said. “The soils farther away were more nutritious.”

The scientific method is a good way to test whether an idea about how nature works is true or not, she said.

A team of two 8th-grade students from Britton Middle School in Morgan Hill entered a project titled “Airflow by Means of High Voltage” in the engineering category. Carson Malan and Josh Cook built a small ion engine to demonstrate that electricity can push air molecules without the need for a moving part like a propeller. 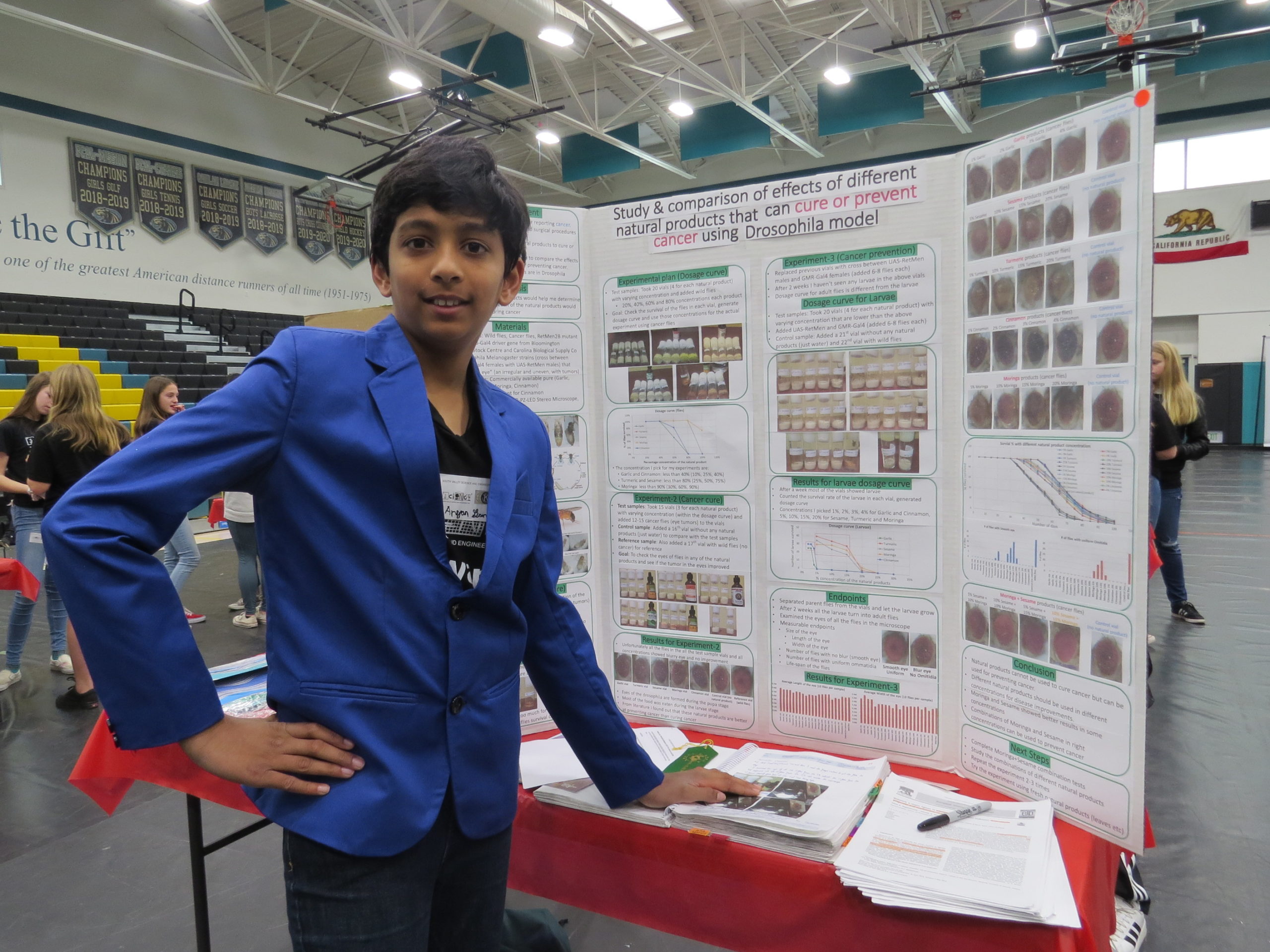 “We learned a lot about electricity and how positive ions work together to produce different results,” Malan said.

The ion engine concept is being tested by scientists and could have practical benefits in the future, Cook said.

“Basically, it’s creating airflow with no moving parts because moving parts wear down all the time. This stuff is used at NASA for satellites,” he said. “They did a test with one and it lasted five years continuously running. This would also be good for high or extreme heat or environments where a normal fan would not work well.”

Susan Oldham-Fritts served as the manager of the science fair and was impressed with Christopher High School’s involvement in this year’s event, the first time a Gilroy school has served as the venue.

“The facility was wonderful. We had a lot of interest and excitement from parents and students who participated,” she said.

As a thank you to Christopher for hosting the fair, Bullet Wireless presented the school with a high-powered microscope worth about $5,000 that can connect to a projector so teachers can show the entire class the tiny world of microbes, she said.

The winners in all categories at this year’s SVSEF can apply for the Synopsis Championship, which will be held March 11-12 at the McEnery Convention Center in San Jose, she said. This is the county-wide science fair. It provides prizes including major scholarships and internships for high schoolers at Silicon Valley companies.

Next year’s SVSEF will be held in February at Martin Murphy Middle School and the 2022 fair will return to Gilroy.

Oldham-Fritts encourages parents in the South Valley to get involved with the fair as volunteers. Organizers will reach out to home and school clubs to let them know how students can benefit from entering science projects.